3 FanDuel Defenses to Target in Week 7

Thursday Night Football Betting: Is It Right for the Shorthanded Browns to Be Favored Over the Broncos?

Sunday was a day of firsts for the 2016 Detroit Lions.

Detroit did not trail at any point in the fourth quarter, ended up winning by multiple scores, and saw its playoff odds increase above 50%. Prior to the 28-13 win over the New Orleans Saints, none of these things had happened this year.

According to our playoff odds, the Lions now have a 78.8% chance of making the playoffs, including a 71.7% chance to win their first division title since 1993 (when the Lions topped the NFC Central, which isnâ€™t even a thing anymore).

Aside from their win on the road, Detroitâ€™s odds shot up thanks to the Minnesota Vikings losing to the Dallas Cowboys, which also dropped the Vikingsâ€™ playoff odds to 23.5%.

This marked the second consecutive week the Lions were the leagueâ€™s biggest playoff odds gainer, while the Vikings were the "biggest loser."

The NFC North has been completely flipped on its head thanks to Detroitâ€™s recent surge and the Vikings' slump, as illustrated by this chart: 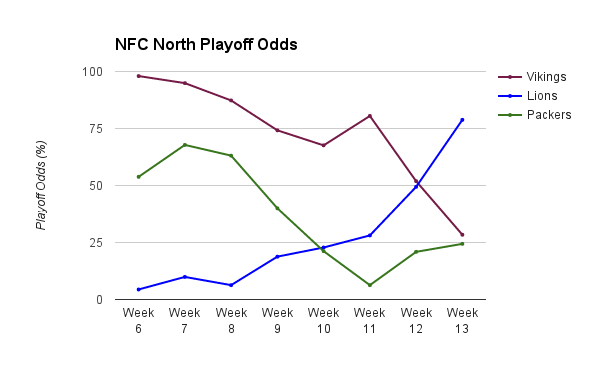 The Lions host Chicago Bears in Week 14, but the schedule gets a little harder after that. Their final three games consecutive road matchups against the New York Giants and Cowboys before coming back home to close out the regular season against the Green Bay Packers.

It won't be easy, but there are some positives on their side, like having a two-game cushion in the division and already sweeping the season series from Minnesota.

Speaking of teams that are surgingâ€¦

The Buccaneers have won four straight, and aside from a win against the Bears, the streak has featured wins against quality teams.

Tampa Bay took down the Kansas City Chiefs on the road, beat the Seattle Seahawks at home, and won on the road again on Sunday against the San Diego Chargers.

If the season ended today, the Buccaneers would make the playoffs as the No. 6 seed in the NFC thanks to a half-game lead over the Washington Redskins, along with a one-game edge over both Minnesota and Green Bay.

While the Atlanta Falcons hold onto a tiebreaker since they have a 3-1 division record, Tampa Bay is keeping pace with Atlanta at the top of the NFC South.

That said, we still give Atlanta a 79.9% chance to win the division, compared to Tampa Bayâ€™s 15.9% odds because of the differing quality of these two teams; Atlanta has a +55 point differential and ranks fifth in our nERD power ratings, while Tampa Bay is minus-8 and 19th.

Still, with seven wins in the bank, the Buccaneers are very much in the playoff mix, a far cry from Week 9 when a loss dropped their playoff odds to 1.7%.

It may not have been pretty, but the Denver Broncos' win over the Jacksonville Jaguars moved their playoff odds needle all the same.

Their victory, coupled with a loss from the Miami Dolphins, moved Denver back into the sixth spot of the AFC playoff picture. The remaining schedule for Denver isn't going to make things any easier, though, as they'll first face the Tennessee Titans on the road, followed by matchups against the New England Patriots, Chiefs and Oakland Raiders.

As you might have noticed in the above chart, Minnesotaâ€™s playoff odds stood at 98.0% after Week 6.

It may seem crazy to see them that high at one point, but teams starting 5-0 have made the playoffs 90% of the time since 1995, according to Benjamin Morris of FiveThirtyEight.

To avoid becoming an outlier, the Vikings will probably need to go at least 3-1 in their final four games, which is not out of the realm of possibility. They'll first travel to Jacksonville for before hosting the Indianapolis Colts, visiting Green Bay, and closing out the season at home against Chicago.

Itâ€™s not a hopeless situation, though youâ€™d be forgiven for getting that impression given the teamâ€™s play since mid-October.

The sound you heard on Sunday? It was the Dolphins crashing back down to earth.

After winning six straight games, Miami was destroyed by the Baltimore Ravens, while wins by Denver and the Pittsburgh Steelers put the clubâ€™s playoff hopes in serious jeopardy.

It should be noted that Miamiâ€™s winning streak wasn't exactly the most impressive run in NFL history. After beating a Pittsburgh team led by a limping Ben Roethlisberger, Miami beat the Buffalo Bills by three, the New York Jets by four, the Chargers by seven (aided by four San Diego turnovers), the Los Angeles Rams by four, and the San Francisco 49ers by seven.

It wasnâ€™t a murderer's row of opponents...and then Sunday happened.

Assuming the Dolphins beat both Buffalo and the Jets on the road -- which is far from a given -- they will probably still need to beat either the Arizona Cardinals or New England. If they finish with a 9-7 record, they'll need Denver to go 1-3 the rest of the way. That doesnâ€™t even factor Pittsburgh into the equation, either.

Washington is the victim of Tampa Bayâ€™s hot streak, and while the Redskins might be the better team, they have their work cut out for them in NFC playoff hunt.

Washington will face the fading Philadelphia Eagles and Carolina Panthers over the next two weeks before playing the Bears and Giants. The Buccaneers close the year with two games against the Saints, a road game in Dallas, and a home game against Carolina.

The Redskins seem to have an edge here, but will need to outpace the Bucs by at least one game during this span. If they produce the same record down the stretch, Washington is eliminated, explaining why their playoff odds are not higher.

The 20 Best Offensive Players From Week 13