All the months of preparation for the 2021 NFL Draft will come to a head tonight. We’ve known about some of the picks for weeks or months -- quarterbacks Trevor Lawrence and Zach Wilson are universally expected to go one and two, respectively -- but there is still plenty of discussion and intrigue to be had from the third pick on. Smokescreens and test balloons are now being floated through NFL media every minute, but soon the first round will show us exactly who deserves the premium prospect spots.

In the unforgettable words of Marvel’s Sorcerer Supreme, Dr. Stephen Strange, “We’re in the endgame now.”

That doesn’t mean your attention to the betting markets should ebb just yet, though. There are some very compelling (and sometimes volatile) lines out there for positional totals in Round 1. These are markets in which we can use the prowess of expert mockers, the wisdom of the crowds, and historical precedent to analyze thoroughly and find you value in.

In 2021, we’re dealing with precedents hitherto undreamt of, but we can help you crack them and find value in defensive positional totals for Round 1 of the NFL Draft.

Total Cornerbacks Drafted in Round 1

One of the deepest positions in the 2021 NFL Draft is the cornerback spot. There are two contenders for the top draft slot at the position: Alabama's Patrick Surtain II and South Carolina's Jaycee Horn. These two are the only true locks, though there are a number of other top-tier players who could make their way into the back half of the round.

Caleb Farley of Virginia Tech would be a high-end option if not for concerns about back and knee injuries in college, and Northwestern's Greg Newsome II is a late riser in the process after an outstanding final season; both should end up first round picks, though Farley’s stock is shakier.

That means we have only four first-round corners with a better than average chance to be first-round picks. Tyson Campbell out of Georgia was considered a late first-rounder early in the process but has been viewed a solid second-round option from September until now. Even if we consider his Bulldogs’ teammate, Eric Stokes, that leaves us with only five first-round corners.

As I mentioned in a previous article, players with Florida State slot man Asante Samuel Jr.’s physical and testing profile have rarely been drafted on Day 2 and have never cracked Day 1. Central Florida's Aaron Robinson has some buzz, but he’s been more often a third-round pick in mocks than even a second-rounder. On Grinding the Mocks, the Expected Draft Position (EDP) consensus and expert consensus agree: there are likely only four first-round cornerbacks in this class. 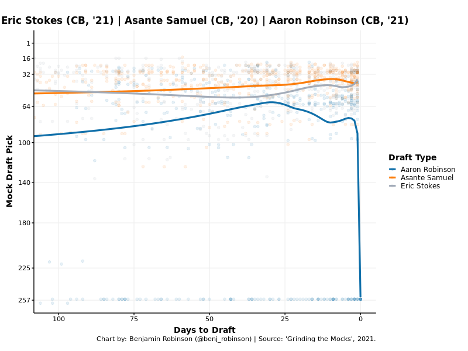 Draft history is not on the side of the over here, either. Over the last 11 years, only two draft classes have hit the over on this line, with the average number of first-round cornerbacks at 4.1. Even if we omit the aberrantly low 2019 class, the last five years have seen an average of just 4.8 cornerbacks go in the first round.

The under’s odds have lengthened a little bit on FanDuel Sportsbook over the last few days, making this a good time to get in on the bet. The implied probability of a -350 line is 77.8%, which is still a perfectly fine value to get in at, unless you see any two of that clump of second-rounders making the leap. I don’t, so I’m banging the under 5.5.

Total Safeties Drafted in Round 1

TCU's Trevon Moehrig-Woodard is the clear favorite to be the top safety off the board on draft day, so the question on this line becomes whether or not we believe he’ll get selected in the first round. Draft history tells us that there have been just two drafts in the last 11 years without a first-round safety (2011 and 2020). The average number of first-round safeties since 2015 is 1.7, so it would seem that this should be an easy over bet.

When we look at the composition of the zero-safety draft classes, it’s impossible to pick out a star player or top target. The 2011 draft had Aaron Williams, Rahim Moore, Marcus Gilchrist, and Jaiquawn Jarrett in the second round -- none a bona fide star in the pre-draft process. In 2020, we had Xavier McKinney, Kyle Dugger, Grant Delpit, Antoine Winfield Jr., and Jeremy Chinn -- none who made clear enough separation from the pack to generate a first-round value.

This 2021 class feels a lot more like the one-safety class of 2015, though in hindsight the first-rounder then should’ve been Landon Collins instead of Damarious Randall. Still, Randall stood head and shoulders above the rest, much like Moehrig does in this class. 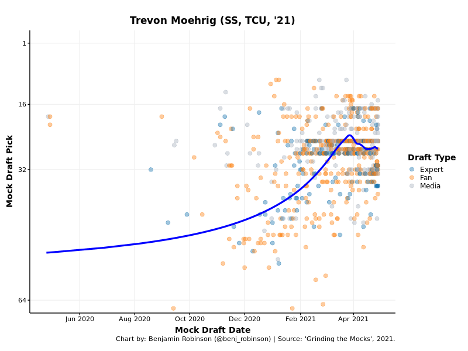 Moehrig’s EDP value has vacillated between 18th to 24th overall since about February, locking him in as a first-round pick to teams like the Jacksonville Jaguars or New Orleans Saints if they miss out on Caleb Farley. The expert consensus puts Moehrig in the first, sending him to New Orleans at 28th overall.

The under wouldn’t be a surprise, if you want to take the longer plus odds here, but everything about how this safety class is made up makes me believe Moehrig-Woodard will find a landing spot on Thursday night. That’s why I’d recommend the over 0.5 before it gets shorter.

Total Defensive Players Drafted in Round 1

As I broke down in the offensive positions article, we should expect somewhere between 17 and 19 offensive players to go off the board in the first round of the NFL Draft, two options of which give us the over here and one of which causes the under. Let’s recap what what we believe here, however.

We project four or five cornerbacks to go in the first round and just one safety, giving us a total of five to six defensive backs. Alabama defensive lineman Christian Barmore should be a first-round selection, as well as Penn State linebacker Micah Parsons and Tulsa linebacker Zaven Collins. If we add in edge rushers Kwity Paye out of Michigan, Miami (FL)'s Jaelan Phillips and Gregory Rousseau, and Azeez Ojulari from Texas, that gives us a total of 13 defensive players right from the jump.

Grinding the Mocks’ expert consensus and EDP both add in Penn State’s Jayson Oweh to the first round from the edge rusher class, and -- while I consider Oweh a fringier prospect -- someone could certainly take the risk on his talent. EDP also projects Kentucky linebacker Jamin Davis and Notre Dame linebacker/safety Jeremiah Owusu-Koramoah to go in the first. Davis has been selected in Round 1 in very few mocks (23.3%), so I don’t consider him a lock, and Owusu-Koramoah might not fit every defensive scheme, so he could fall a bit.

Still, if any one of these prospects, or a Tyson Campbell or even Levi Onwuzurike makes their way into the first, the over hits here. Give me the over on 13.5 first-round defenders in 2021.