All the months of preparation for the 2021 NFL Draft come to a head on April 29th.

We’ve known about some of the picks for weeks or months -- quarterbacks Trevor Lawrence and Zach Wilson are universally expected to go first and second, respectively -- but there is still plenty of discussion and intrigue to be had from the third pick on.

Smokescreens and test balloons are now being floated through NFL media every minute, but soon, the first round will show us exactly who deserves the premium prospect spots.

In the unforgettable words of Marvel’s Sorcerer Supreme, Dr. Stephen Strange, “We’re in the endgame now.”

That doesn’t mean your attention to the betting markets should ebb just yet, though. There are some very compelling (and sometimes volatile) lines out there for positional totals in Round 1. These are markets that we can use the prowess of expert mockers, the wisdom of the crowds, and historical precedent to analyze thoroughly and find you value on.

In 2021, we’re dealing with precedents hitherto undreamt of, but we can help you crack them and find value in offensive positional totals for Round 1 of the NFL Draft.

Total Quarterbacks Drafted in Round 1

As previously mentioned, the quarterback position already has two locks at the top of the draft: the Jacksonville Jaguars will almost certainly select Lawrence, and the New York Jets have zeroed in on Wilson.

The next three prospects -- Ohio State's Justin Fields, North Dakota State's Trey Lance, and Alabama's Mac Jones -- are also all-but-guaranteed to be selected in the first round.

Fields was in contention for the third pick for a while but now has seemingly been removed from that discussion to the 8-to-15 range, per Grinding the Mocks. Though Jones is the betting favorite to be the third overall pick, Lance has surged to the second-highest odds for the three pick and is routinely mocked in the same range as Fields.

That gets us to the “five” component of the 5.5 line, which in theory means just one more passer needs to get picked for us to hit the over. Only one other team has to get desperate and reach or trade up into the final few picks of the round to secure “their guy.” 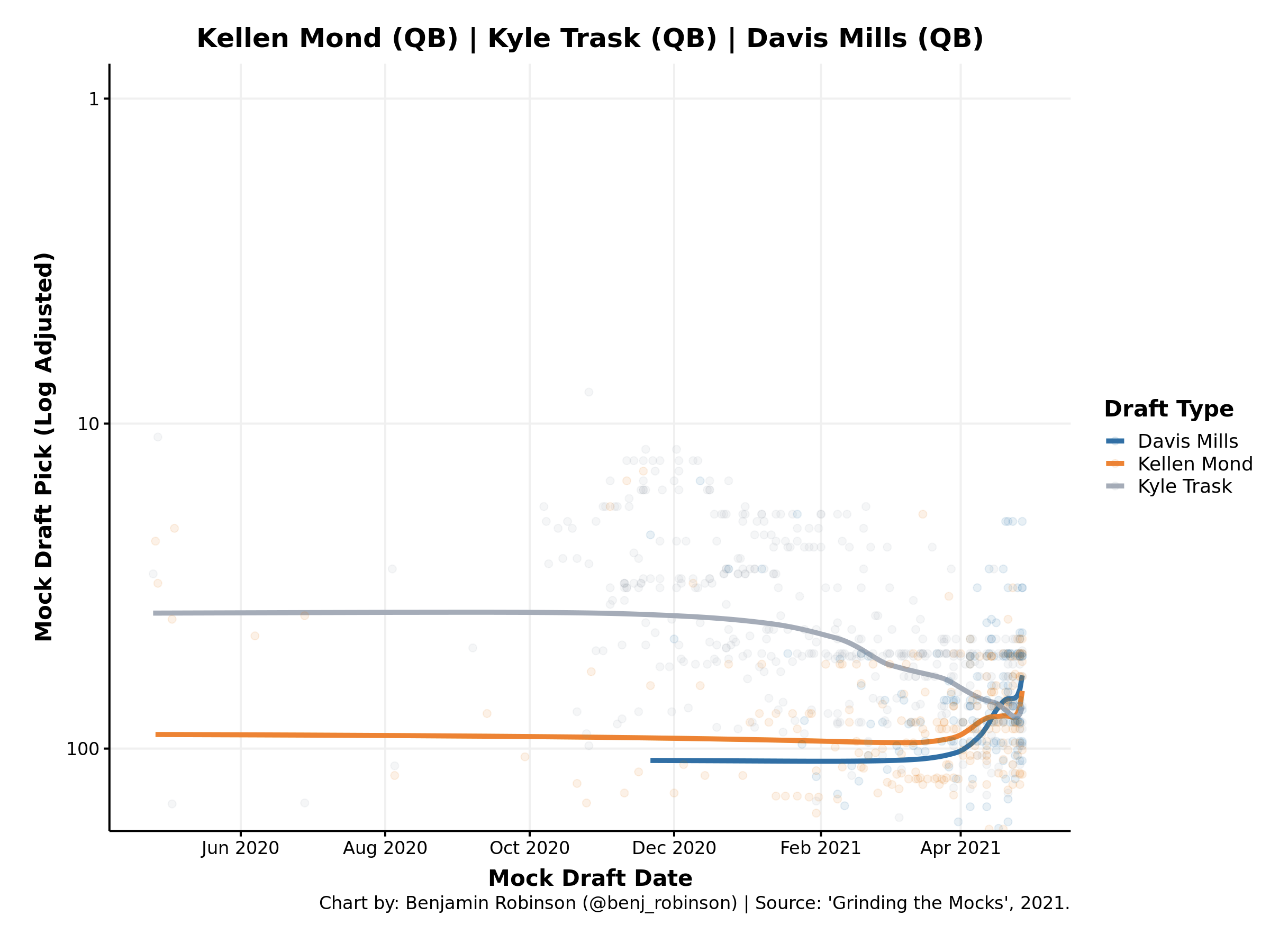 That just doesn’t seem likely, however, with Florida's Kyle Trask having dropped from an early second-round projection through December to early third-round mock slots. Stanford's Davis Mills is the only other quarterback currently being mocked inside the top two rounds, and he’s just barely inside there.

Historically, only the 2018 class has challenged this line in the last decade, and the only other quarterback class in the last 25 years to reach five first-rounders was the 1999 class -- led by Donovan McNabb and Daunte Culpepper.

One class in the modern era broke this line: the legendary 1983 group, led by three Hall of Famers in John Elway, Dan Marino, and Jim Kelly. Unless you believe the 2021 quarterback class has more than two generational or all-time passing prospects, the under is the play, even with an implied probability of 86.7%.

Total Offensive Linemen Drafted in Round 1

This offensive line class is absolutely stacked. There are top-tier offensive tackles for days, a godsend for a league that just a few years ago was starting to look like it had run out of true top-tier edge-protection talent. There are plenty of strong interior linemen, with two top-flight Alabama linemen setting the pace and a score of others not far after. The top-40 picks will be chock-full of premium pass-protectors and rough-and-ready road graders, but can more than six make their way into the first round of the NFL Draft?

Over the past 11 years, the average number of first-round offensive linemen has been 6.3, and in the last five years, that has dropped to just 5.8. Three of the last five draft classes have gone under this line, and though the two-pick 2017 class was a bit of an aberration, omitting it still doesn’t push the average beyond the 6.5 line.

Four do sit just outside, however, in Alabama’s Alex Leatherwood and Landon Dickerson, Liam Eichenberg out of Notre Dame, and Samuel Cosmi of Texas. 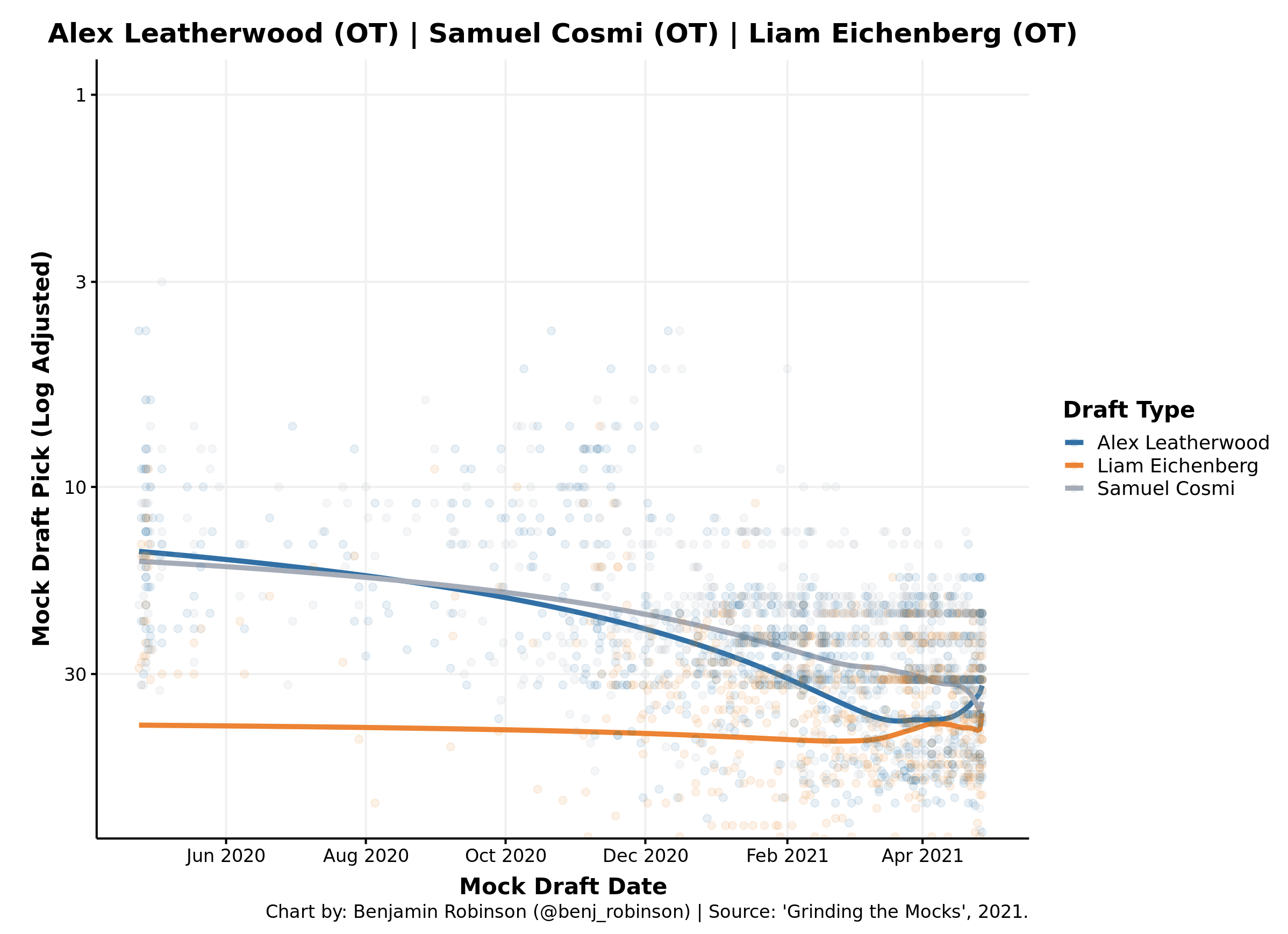 Leatherwood and Cosmi had been mocked in the first round until about March, when they started slipping out of that range by the consensus, while Eichenberg has been a consistent mid-second prospect who has gotten buzz lately and scooted upward.

Dickerson was getting third-round projections last year but has rocketed upward into the conversation for the back end of the first round. Could two of these players make their way into the first round? It’s not impossible, and the experts on Grinding the Mocks do put seven linemen in their consensus first round pretty comfortably.

I’d lean towards the over, if only by a hair. With a top-three offensive line class by median 247 Sports recruiting grades over the last decade, and easily the best projected first- and second-round class in that time, I’ve got to assume five or six linemen are locks.

Then just one other -- a la Leatherwood or Cosmi -- just needs to find his way onto a late-round team’s draft card.

Total Offensive Players Drafted in Round 1

After going through all the offensive positions, I’m right up against it for this line. In this article, I mentioned that we should expect 11 to 12 offensive players between quarterback and the offensive line, and the skill position players should add another one or two running backs, four wide receivers, and one tight end, for a total of 17 to 19 offensive players.

If I’m making a firm prediction, I believe this running back class is closer to the value of 2011, 2019, and 2020 (which had one back each) than other recent multi-back classes. I also believe this is the strongest top-end offensive line class in a while and seven will go in the first, which will give us a total of 18 offensive players.

The Expected Draft Position consensus puts the total number at 17, while the expert analysis gives us 19 offensive players in the top-32; the same conundrum as us.

For the record, at least, history is conclusively not on the side of the over. Only one draft class in the last 11 surpassed this mark; that was the 2020 draft, which barely hit with just 19 offensive players taken.

This could be close, but I want the under here.

Fantasy Football: 3 Reasons to Be Hesitant About Drafting Austin Ekeler