How Good of a Fantasy Football Quarterback Can Daniel Jones Be This Year?

When I looked into New York Giants quarterback Daniel Jones' production from his 2019 rookie season, I was pleasantly surprised with how well he did.

In spite of a bad final record, last year’s sixth overall pick finished with 3,027 passing yards, 24 touchdowns, and 12 interceptions on 459 passing attempts (62 percent completion rate). In fact, among the 28 quarterbacks since 2000 to attempt 400 or more passes in their rookie year, Jones’ touchdown rate was the 2nd-highest and his interception rate was 10th-lowest. He also added 279 rushing yards and 2 touchdowns on 45 rushing attempts.

All in all, a fairly respectable season, right? Not so fast, hotshot.

“Danny Dimes” was startable as a fantasy quarterback just four times last year (tied for sixth-lowest percent of startable games in 2019) and was the most volatile quarterback option on a week-to-week basis. How much should we trust Daniel Jones in his second season?

Jones also ended up with the only negative Passing Net Expected Points (NEP) per drop back among 27 quarterbacks to drop back at least 400 times last season.

NEP is a metric that describes the contribution a play (or player) makes to their team’s chances of scoring. By adding down-and-distance value to the box score production, we can see just how much each play and each team as a whole influence the outcome of games. For more info on NEP, check out our glossary.

While Jones was doing some decent things in terms of racking up fantasy-valuable plays, he was not creating NFL-worthy plays on average. He also ended up fourth-worst in Passing Success Rate (the percent of drop backs resulting in a positive NEP gain), showing he was extremely inconsistent at creating positive value. A large portion of this came from his league-leading 18 fumbles. When combined with his interceptions, his 30 total turnovers were the third-most among rookie quarterbacks since 2000 (behind 2001’s David Carr and 2017’s DeShone Kizer -- also tied 2001’s Chris Weinke).

Unfortunately, though, Jones’ passing profile just didn’t do enough to offset his horrific turnover numbers. The chart below (courtesy of AirYards.com) shows his completion rate to different depths of the field and compares that to the league average (the orange line). 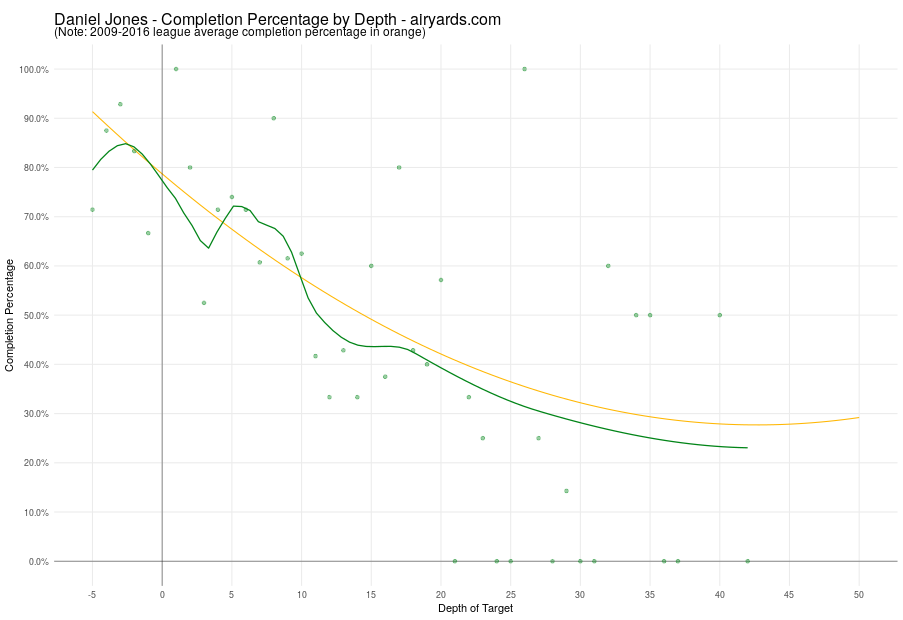 It’s obvious that shorter passes are easier to complete for a number of reasons, but it should give us a fair amount of pause that at every depth (aside from the 5- to 10-yard range), Jones’ completion rate was well below-average. And that wasn’t solely because his receiving corps struggled in 2019; per Player Profiler, Jones’ True Completion Rate (factoring out unpressured throwaways and dropped passes) ranked just 28th in the league last year.

In 2019, Daniel Jones turned the ball over a ton, threw short, and threw poorly. Often, the only thing salvaging him as a fantasy asset was the minimal contribution his rushing made. Can he turn this around?

First of all, we have to look at how hard regression will hit Jones in 2020.

Our own JJ Zachariason did a study a few years back on touchdown regression and found that the rate touchdowns get thrown at, tends to equalize at about a 4.5 percent rate. I did a similar study on interception regression and found its rates stabilize at around 2.8 percent. Luckily for Jones, that means his 5.2 touchdown rate and 2.6 percent aren’t too far off. We should see his rates next year closer to a 4.8 percent touchdown rate and 2.8 percent interception rate, giving him about 28 touchdowns and 16 interceptions, assuming the 550-plus pass attempt our projections afford him.

I also ran a quick calculation of how fumble rates regress as well, and rookies who lost 8 or more fumbles their rookie season while attempting at least 400 passes saw their fumble rates drop by 0.6 percent on average (i.e. Joe Flacco lost 11 fumbles his rookie year and only 8 his next year). Plugging in Jones’ numbers to this calculus gives us a total of 16 fumbles. Even though his ball insecurity rate should regress to the mean some, the projected increase in playing time could keep his butterfingers slipping this year. It’s worth noting that this projection is much less sticky year-over-year than even touchdown or interception scoring, but quarterbacks with fumbling issues don’t often ever become incredibly secure and secure quarterbacks don’t tend to get reckless in the future.

What is especially sticky is Average Depth of Target (aDOT), and Jones’ 8.0 aDOT ranks a below-average 16th among the 27 passers who dropped back 400 times or more last year. Perhaps the Giants open things up with Jones in 2020, since he showed he was largely capable at avoiding interceptions last year, but I’d be skeptical of assuming they change much besides focusing on not turning the ball over.

Fantasy players will hope that the “Konami Code” rushing value he provides could be a floor, but even that has bad news. Since 2000, there have been just 35 quarterback seasons with 6.0 rushing yards per attempt or more on at least 40 attempts; Jones was one of those. However, only four times has a player achieved those numbers in back-to-back seasons: three were Michael Vick, and one was 2017-18 Mitchell Trubisky. Jones has some Trubisky to his game (not a compliment), but he could find it tough to be as efficient or productive on the ground, even if he runs more frequently in 2020.

Our models project Jones as the 19th-best quarterback in fantasy football this year: a middling QB2 in most leagues. We afford him 4,023 passing yards, 24 touchdowns, and 13 interceptions on 582 attempts, along with 61 rushing attempts for 266 yards and 2 touchdowns.

Surprisingly, Jones is being drafted as the 14th-highest quarterback in BestBall10s ADP, in the same range as early-season 2019 darling Matthew Stafford and ahead of more compelling targets like Jared Goff and Baker Mayfield.

While a 13th-round pick in most fantasy leagues isn’t a huge price to pay, it seems that Jones’ potential upside after a year of growth is being overvalued, while his lack of consistency and troubling floor is being undervalued. In a best ball or DFS format, you can mitigate some of this risk due to starting him only when he’s your best option. In season-long leagues or dynasty formats, though, I’m not sold on his long-term potential.

If you’re looking at cashing in on “Danny Dimes” in 2020, I’d suggest doing so before his market bottoms out.