JJ Zachariason  —  @LateRoundQB Jun 15th, 2016
Share on Facebook Share on Twitter
It's fine to have Cam Newton ranked as your top quarterback this year in fantasy football, but don't expect him to put up the same kind of numbers he did last year.

I know Cam Newton is a really good quarterback. I know heâ€™s getting Kelvin Benjamin back this season, adding to his arsenal of receiving weapons. And I know heâ€™ll be the most popular early-round quarterback selection in fantasy football drafts.

But we canâ€™t ignore something obvious.

Touchdowns are the lifeblood of fantasy football. You pay top dollar on guys who can score them, you avoid players who never seem to find that specific area of the field, and you watch a television channel every Sunday during football season thatâ€™s dedicated to them.

And itâ€™s because fantasy football rewards these scores more than any other action on a football field.

On a game-by-game basis last year, passing touchdowns correlated with fantasy point output at the quarterback position (a correlation coefficient of 0.86, which indicates a very strong relationship) more than any other counting statistic, which includes yards. No quarterback scored fewer than 17.9 fantasy points while tossing at least three touchdowns in a game last year, while we saw 26 instances where a signal-caller hit the 300-yard mark without scoring that many points.

But touchdowns are also a little random. Yes, some quarterbacks are better at throwing them, and you better believe certain running backs and wide receivers are, too. At the highest level, though, thereâ€™s a little luck involved in touchdown scoring.

Take Cam Newtonâ€™s 2015 as an example. The man was an animal on the field and certainly deserved his Most Valuable Player award, but he was throwing touchdowns at a rate -- 7.1% of his attempts resulted in a score â€“ that he had never seen in his career. I mean, his 2015 touchdown rate was over 66% better than his career rate entering the season.

Some may say this is simply the result of superior quarterback play, and thatâ€™s partially true. But Superman himself needed things to go his way in order to sustain such a high rate throughout the season.

Thatâ€™s an important thing to remember as we enter the 2016 fantasy football season.

Cam Newton would have to be historic to repeat something thatâ€™s already historic.

Since 2000, weâ€™ve seen just 15 instances where a quarterback threw 200 or more passes while maintaining a touchdown rate -- again, this is the percentage of attempts that result in touchdowns -- of 7.0% or higher. Of the 11 who threw 200-plus passes the following year, none finished with a higher touchdown rate as they did during the 7.0% or better season. And the average drop in touchdown rate was 2.45%.

This isnâ€™t to say someone like Cam Newton (or Russell Wilson) will see that big of a drop in 2016. After all, theyâ€™re on the lower-end of the scale -- larger year-to-year touchdown rate drop-offs are bound to occur with players who had incredibly high touchdown rates in the first place.

But Newton would have to break a trend that we havenâ€™t seen broken before in recent history. He would have to take somewhat of an outlier and make it even more of one.

Thatâ€™s very difficult to do.

The truth is, thereâ€™s not a super strong correlation between touchdown rates from one year to the next among all 200-plus attempt passers weâ€™ve seen since 2000. With a correlation coefficient just under 0.30, weâ€™re looking at a pretty weak connection. In other words, a playerâ€™s touchdown rate one year doesnâ€™t magically translate to the next very seamlessly.

Knowing this, when we project the touchdown efficiency from a passer, we have to look at regression -- a return to a former or less developed state. We have to see what happened in the past to other players -- both the good and the bad -- and analyze what that means for the quarterbacks we care about during the upcoming season.

I mentioned earlier that the high-end touchdown rate seasons since 2000 saw an average drop of 2.45% within the category during the following year. But that's not a fair way of doing analysis -- I'm working within arbitrary parameters and making it seem like Cam Newton is about to become Nick Foles for the Panthers.

So to be more exact, I plotted the touchdown rates for a player in one year versus the difference in touchdown rate the following season from 2000 to 2014. This past year isn't part of the data set because, well, we don't have next-season data.

What I found was an image that showed regression at its finest. 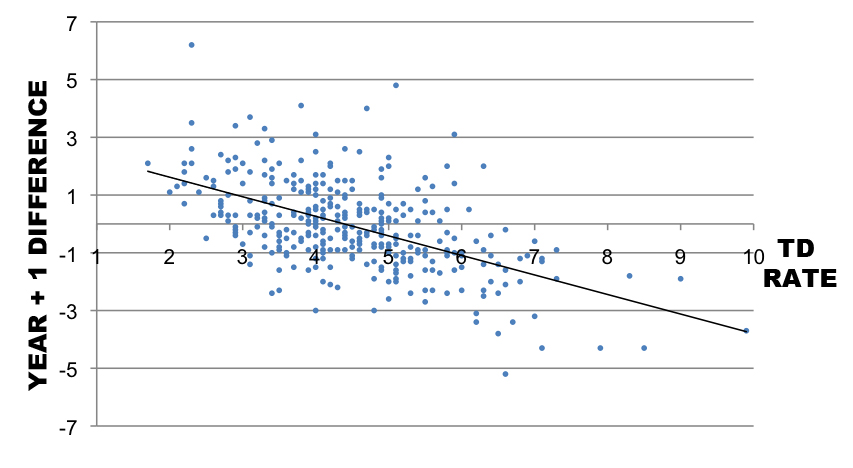 Essentially, you can see that, from 2000 to 2014, quarterbacks "break even" around the 4.5% mark. That is, if a player has a touchdown rate of 4.5%, he'll more than likely be around that same mark the following year because it's a fairly average rate.

Now, to find the expected touchdown rates of players, we can plug in their touchdown rates from one season and see where it fits on our trendline -- that'll tell us how far it will rise or fall the following year. Except there's one tiny problem. If we go all the way back to 2000, we're going to see some skewed results because quarterbacks weren't as efficient at throwing back then.

While the difference isn't super dramatic, we'll be taking a look at the 2010 through 2014 seasons. The timeframe is a little random, sure, but it gives us a nice sample of 131 quarterback instances where the passer had back to back 200-plus attempt seasons in order to provide next-season context.

Because quarterbacks are more efficient during this new timetable, the trendline is a little different, with an emphasis on "a little". But here's what it tells us about quarterbacks from the 2015 season:

See, you Cam fantasy football truthers can't be that mad at me here, because even within the context of regression, he still should ball out.

But a touchdown rate that drops from 7.10% to 5.41% is still pretty significant. If Cam were to throw the same number of passes this year (496 attempts), then we're looking at fewer than 27 passing touchdowns instead of the 35 he had last season. Those 40 points would still place him as last year's top fantasy quarterback, but only by a couple of points, meaning the edge you're looking to obtain in drafting him early is pretty much evaporated.

The players we should focus on are the ones who had annoyingly low touchdown rates a season ago despite being reliable passers. Here's a look at those guys, sorted by how many more touchdowns they could've thrown last year with their adjusted and regressed touchdown rate.

Matt Ryan will probably never be an elite fantasy passer, so don't think that's the argument here. What this does tell us, though, is that Ryan should have been a lot better last season from a raw statistical perspective, and there's even more evidence of that within a wide receiver regression analysis I did earlier in the offseason. (Hint: a pretty good player who catches passes from Matt Ryan should have had an even bigger season than he did last year.)

Of course, some names on this list are not great, Bob! At least when it comes to throwing touchdowns.

Alex Smith, for example, has a career touchdown rate of 3.9%. (Granted, he used to be get-him-off-the-field awful.) One of either Blaine Gabbert or Colin Kaepernick won't be starting this year, and Sam Bradford has plenty of competition in Philly.

But what if players like Jay Cutler and Teddy Bridgewater get better in the touchdown rate column and also see a higher number of attempts? What about Jameis Winston and the fact that he's more than likely going to progress naturally as a second-year quarterback? And let's not forget Philip Rivers, who's constantly undervalued in fantasy football all while gaining a new weapon over the offseason in an offense that should throw.

Touchdowns matter in fantasy football. Probably to a greater degree than we'd like to admit.

Scoring production can be volatile. A spectacular 16-game season in the touchdown department doesn't guarantee another one the following season, even if that quarterback gets a player like Kelvin Benjamin back. Even if it appears as though his offense will be better.

There's a reason we see fantasy seasons like Cam Newton's 2015, Andrew Luck's 2014, Peyton Manning's 2004, or Tom Brady's 2007 without a repeat performance the following year. And it's not just because the players get hurt -- Brady tore up his knee after his 50 touchdown campaign, sure, but he's also yet to hit the 40-touchdown mark since then. It took Peyton Manning seven seasons to get to 35 passing touchdowns after his 9.9% touchdown rate, 49-score campaign in 2004.

And, guys, I hope this isn't breaking news, but even when Luck was healthy last year, he was a replacement-level fantasy asset.

Asking a player you draft to repeat a historical performance is a losing strategy. But the fantasy football world does it every freaking year.

A player like Cam Newton can be the top fantasy quarterback again in 2016. Before you make assumptions and draft him, though, you have to ask yourself: Is he really going to maintain his pace?