How Is Stefon Diggs' Fantasy Football Outlook Impacted By the Move to the Buffalo Bills?

The Buffalo Bills made a splash yesterday by landing Stefon Diggs from the Minnesota Vikings, thrusting him into the number-one receiver role for the Bills. What are the Bills getting and how does it impact their offense?

Those are the key questions we need to look at, as it all impacts potential fantasy value.

A New Boss In Bills' Mafia?

Diggs has been one of the most consistent receivers in football over the past few seasons and is joining a team that lacks a true star pass catcher. The other top receiving options on the Bills consist of John Brown, Cole Beasley, and Dawson Knox, all of whom had an impact to varying degrees last season. Notably, Brown led the team in targets, receptions, yards, and was tied for receiving touchdowns. This is the role we should see Diggs step into this coming season, and it shouldn't be too much of a change for him or for Josh Allen. 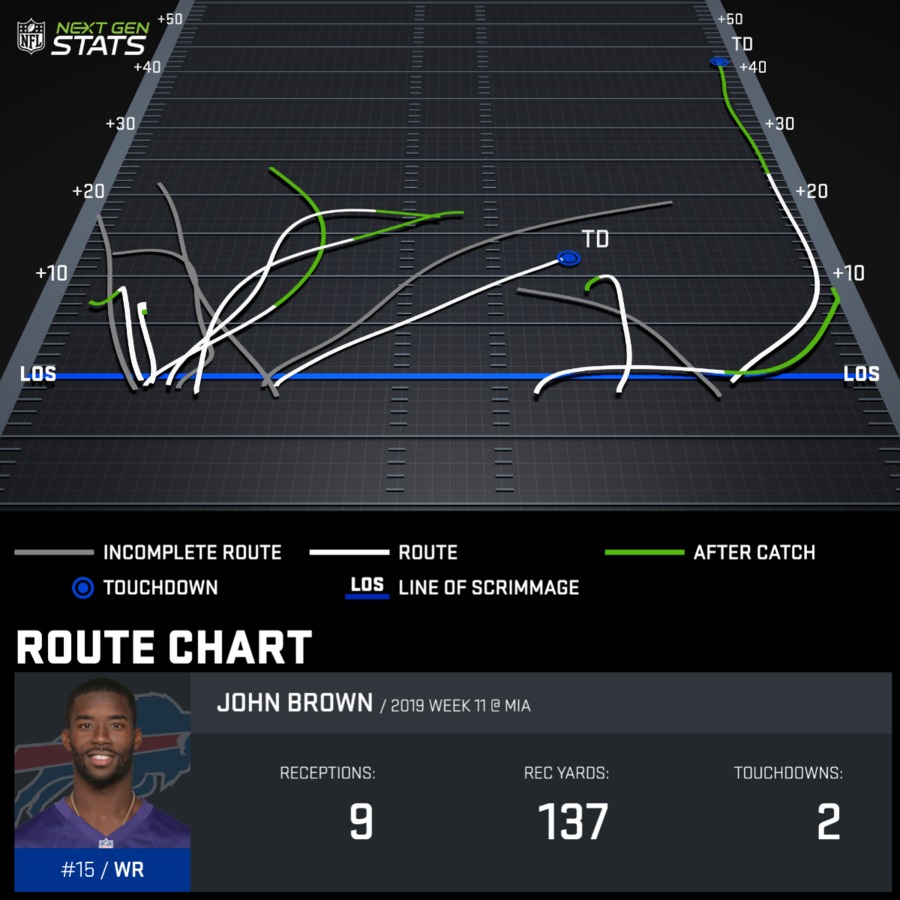 As you can see in these route charts, each from one game in 2019, Diggs and Brown have a similar overall profile. The question most people might have would be -- can Josh Allen actually get Diggs the ball downfield?

There are still plenty of question marks surrounding Allen and his effectiveness as a quarterback, but there are a few things that are true for him. He likes to throw the ball deep -- a lot.

According to Sports Info Solutions, Allen attempted the 10th-most deep passes last season. But he was 21st in deep pass completion percentage. While there is plenty of room for improvement, the volume of deep passes is a great sign for Diggs' fantasy production, and it lines up with his 15.1 aDOT from last season. Allen isn't viewed as an elite or very efficient passer, but deep passes bring the most fantasy value for receivers.

The on-field connection between Allen and Diggs may not take too long to develop, as Diggs is primed to fall into the role Brown held last season -- hopefully, with a more efficient Allen throwing him the ball. Regardless of Diggs being considered the BIlls' number-one receiving option or not, one thing is clear. He is in a spot to post more than 1,000 yards for the third straight season and be a strong fantasy option at wide receiver once again.