NBA Betting Guide for Tuesday 10/26/21: Sticking With Over/Unders Early in the Season

Geronimo Allison Is a Late-Round Steal in Fantasy Football

With the exodus of Jordy Nelson from the Packers, many have been turning to veteran wide receiver Davante Adams for some fantasy value. But, sometimes, you need to look beyond the obvious to get a leg up in your drafts.

Adams is a second-round pick (per Fantasy Football Calculator), and while he will likely be a very strong candidate to end the season as the top target in Green Bay, he comes at a premium cost. Taking him means passing on backs like Christian McCaffrey and Jerick McKinnon or even top tight end Rob Gronkowski.

No worries, though. If you want a piece of the pie in Green Bay, there's likely going to be some value elsewhere with Aaron Rodgers back under center. With Nelson gone, others around Adams will have to step up.

Randall Cobb is still with the team and should continue his success from the slot, but there's another option going even later in fantasy drafts that could return immense value this season -- and that's Geronimo Allison. Let's take a look at what will make Allison a great late-round target for your fantasy squads.

Between losing Nelson and some other minor ancillary pieces, the Packers watched 165 targets and 41.2% of their Air Yards from 2017 season go out the door, as well. Adams will be the number-one guy and Cobb is fully expected to be the second go-to receiver to fill the void in the Packers' passing attack. There's one issue with that thought process: we already know exactly what Cobb is.

In the last two years, Cobb has played more than 80% of his snaps from the slot. During this stretch, Nelson and Adams dominated the snaps out wide (we'll look at this later), and no other wideout outside of the three saw more than 39 targets. The player who got 39? Allison in 2017.

Jimmy Graham is also a new face in town for the Packers. Some project him to get considerable work, and that could be a hindrance to Allison getting his share of targets. I'm not scared of Jimmy. Since Aaron Rodgers became the starting QB in 2008 (10 seasons), he's only supported a top 12 TE three times, with only one of those times being top ten. Graham may have a role in this offense, but McCarthy's gameplan has been fairly static over the years and shouldn't be expected to change much.

The main takeaway here is that the Packers' top three wide receivers are due for significant work in the passing game if that trend remains the same. With Adams on the top outside role and Cobb returning to the slot, there is a need for another guy to step up on the outside, and if the Pack's current depth chart can be relied on, it's going to be the 24-year-old Allison.

Allison may have been a late bloomer in terms of his football talent. He didn't play football during his sophomore and senior years of high school, and he played at a junior college before transferring to Illinois for two seasons. After that, he proceeded to go undrafted in the 2016 NFL draft, and was then signed by the Packers as a project piece. That project came to fruition rather quickly.

Unfortunately, the 2017 season will not provide much meaningful data, as Brett Hundley started most of the season in place of Rodgers. So, let's take a look at how well he performed in a limited role with Rodgers during the 2016 season -- his rookie season -- using numberFire's Net Expected Points (NEP) metric.

NEP essentially uses historical play data -- including down-and-distance -- to determine a baseline expectation for each play, so earning more NEP per play would be seen as a good quality to have. In Allison's rookie season (the only season he's played with Rodgers), he had the highest Reception NEP per reception (1.72) and Reception NEP per target (0.94) of any receiver on the team. 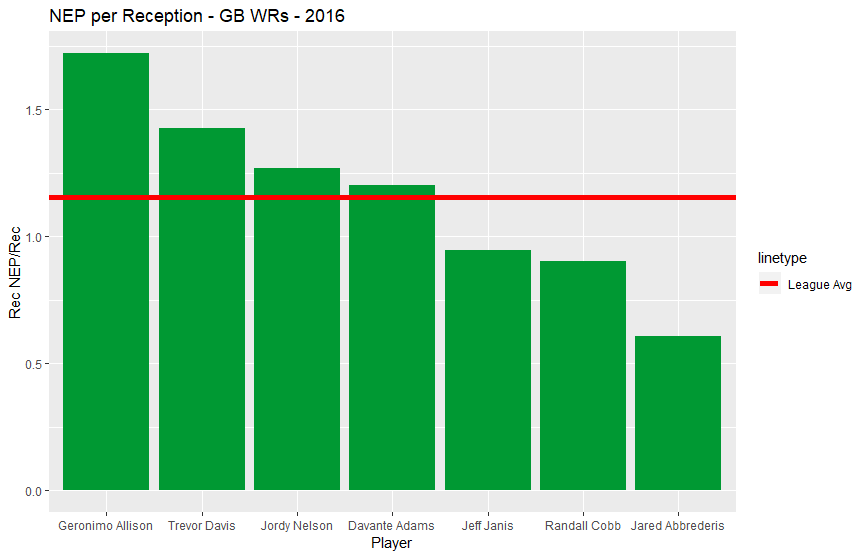 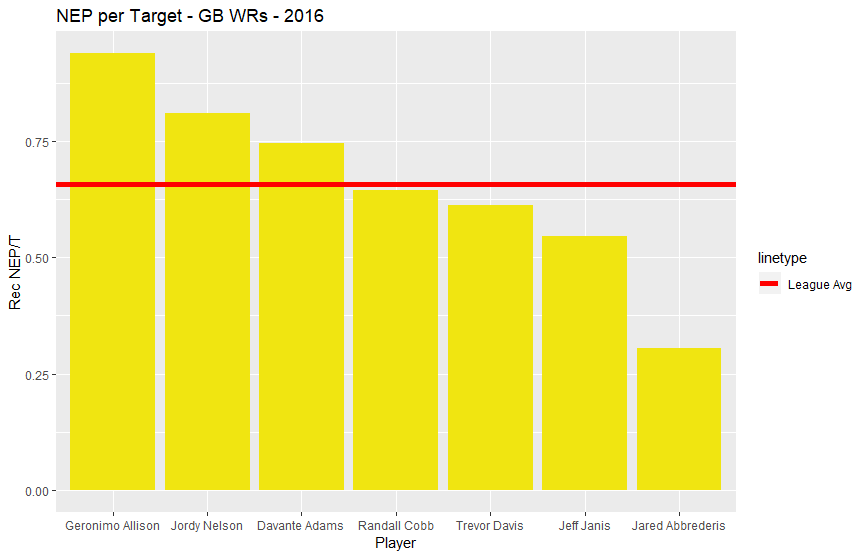 While he only had 12 receptions that season, he amassed a whopping 202 yards at 16.8 yards per reception. This was a good litmus test to see if his game would transition to the NFL level, and it appears it did in the form of a big-play threat.

In 2017, Allison turned in more catches, but his per-catch yardage fell to 11.0 yards and his NEP marks -- 0.73 per reception and 0.43 per target -- both dropped, as well. However, it is worth noting that on the receiving end of Hundley, he averaged just 8.1 yards while he upped that to 12.8 with Rodgers at the helm. That includes 7 first downs and 3 catches of 13-plus yards on 23 attempts. The connection is there.

There have already been many reports out of camp that Allison has been the best bet to be the second outside receiver behind Adams. Given that, let's take a look at the target share for Packers receivers from 2014 to 2016 (not counting Rodgers' 2017 campaign), broken down by fantasy rank (per FFStatistics).

As for 2014 and 2016, we can see significant work being dealt to the top two passing options when Rodgers and his weapons are healthy. For reference, in these seasons, his WR1 finished as the 3rd and 2nd ranked fantasy WR, respectively. And as supporting evidence for Allison, Green Bay's WR2 finished as the WR11 and WR8, respectively.

We know opportunity is king, and Allison should get the chance to take advantage with so many targets to go around in the Packers' passing attack.

According to Fantasy Football Calculator, Allison currently has an ADP of 12.04 in 12-team PPR drafts . He's still only 24 years old and primed for a breakout under arguably the best quarterback in the NFL. People are sleeping on him, and I think it's time they wake up.

If history is any indicator, Allison is in line for a large role in what should be an elite offense (we have them ranked third). There's no reason that he can't be a fantasy WR3 with a ceiling that could exceed that were the chips to fall in his favor throughout the year.

Fantasy Football: You Should Avoid Rookie Wide Receivers This Year

10 Players You Should Be Targeting in Fantasy Football Drafts