Thursday Night Football Betting Preview: Will Panthers and Falcons Light Up the Scoreboard?

Ranking Each NFL Team's 2017 Schedule From Toughest to Easiest

When the NFL schedule is released each year, we're not learning who teams are playing, but when they're playing them. Given the ebbs and flows of an NFL season, that's still important.

I'm sure you've been inundated with schedule takes (or taeks, for your Internet-savvy people) already, with analysts telling you which team is going to go 13-3, and which one is going to poop itself after making the playoffs last season.

Well, hold on tight, because I'm here to give you some more takes.

(Guys, it's April. And we're waiting for the draft to start. We have to write about something.)

Honestly, though, this should at least interest you a bit. I took the NFL schedule and broke it down by 2016 team nERD, which is our way of determining the number of points we'd expect a team to win by against an average one on a neutral field. A nERD rating of, say, 3.04 would mean we'd expect a team to win by a little over a field goal against an ordinary one. If a team had a -7.56 nERD, then they're pret-tay bad -- they'd be expected to lose by over a touchdown to an average team.

Now, looking at the NFL schedule through the lens of nERD isn't the most accurate thing in the world to do. Teams have already changed from last year. Teams are going to get better. And they're going to get worse. But it's a far better description of how a team actually performed versus, say, a win-loss record. You know, like how the Chargers somehow went 5-11 last year despite an average point differential at the start of each offensive drive that was fourth-best in football.

While win-loss records showed the Chargers were bad, nERD actually ranked them as the 15th-best team in football.

Like I said, we already knew who these teams were playing, so this exercise could've been done when the season ended. With that being said, here's a look at this year's NFL schedule, ranked by toughest to easiest based on the nERD ratings from last year. (You're going to want to click for a larger image.)

What this is telling us is that the five toughest schedules -- again, this is based off of last year's nERD, so things will undoubtedly change -- belong to Miami, Oakland, Tampa Bay, Kansas City, and New York (Jets). Miami is especially eye-popping considering they were one of the most overrated teams according to nERD last year, having made the playoffs despite finishing 25th within the metric.

On the flip side, the Titans have the easiest schedule, followed by the Cardinals, Jaguars, Colts, and Ravens.

Let's break this down further, though.

Though Miami holds the toughest schedule overall, their first-half slate of games isn't so bad.

Judging by this, if you want to put money on a team that could get off to a hot start, it might be Indianapolis. But their average is being pushed down by the fact that three of their first five games are against the Rams, 49ers, and Browns.

In truth, the Jaguars might be the team to watch to start the year. Only one of their first seven opponents (they have a bye in Week 8) had a nERD north of zero last year, meaning six of their first seven games were against below-average squads from 2016. The only "good" team they'll face is Pittsburgh.

Here's what the second half of the season looks like. 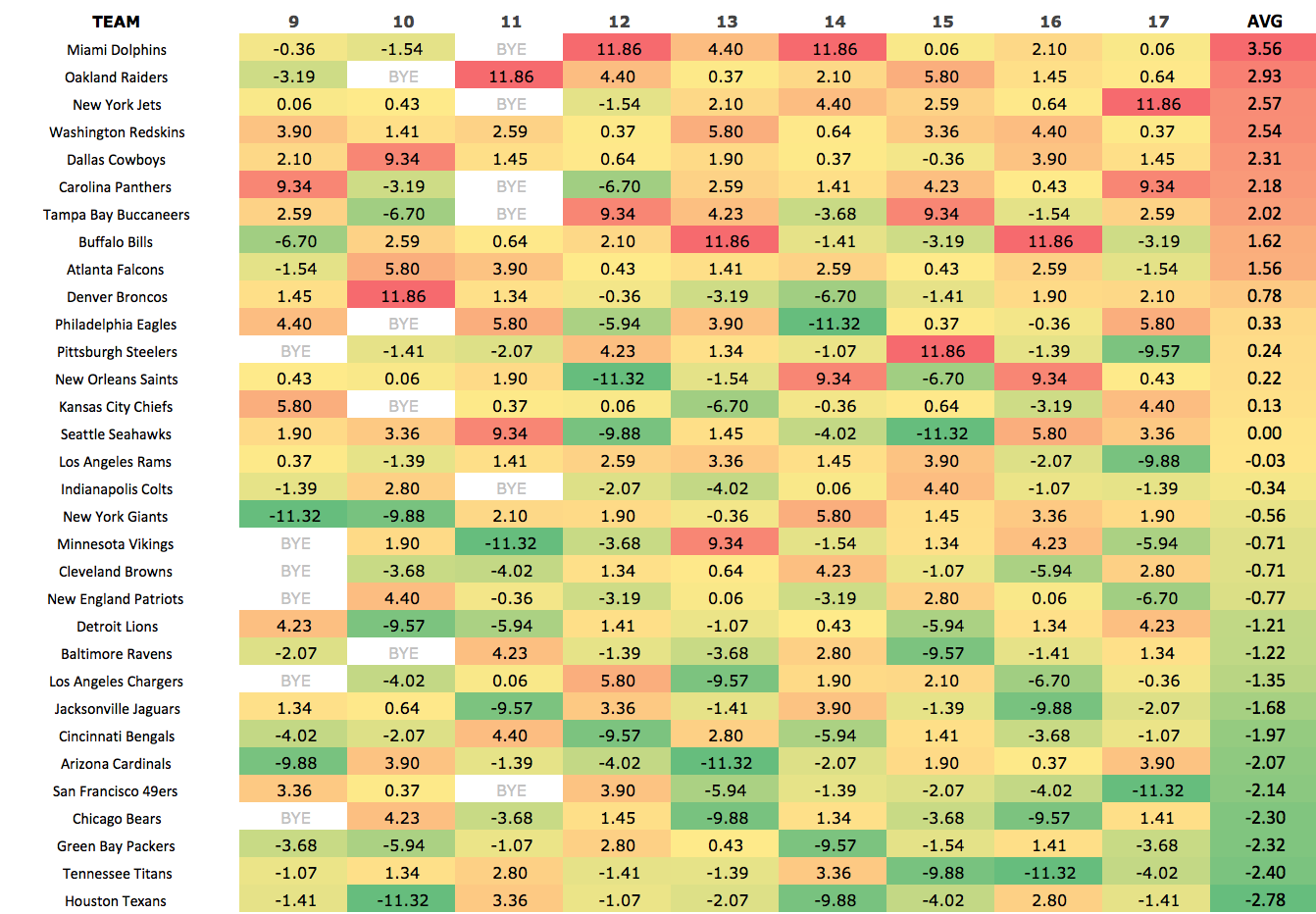 Like Jacksonville's first half of the season, Houston will face just one team from last year that had a positive nERD (Arizona). Don't be shocked if they go on some sort of run down the stretch in what's an improving AFC South.

Looking back at Miami, a big reason they have such a brutal second half is because they get the Patriots twice. Even still, their final six games feature opponents who had positive nERD ratings last year (New England being there twice, Buffalo twice, Denver once, and Kansas City once).