Dan Pizzuta  —  @DanPizzuta Dec 15th, 2016
Share on Facebook Share on Twitter
Taylor hasn't matched last season's production, but factors out of his control -- namely the health of Sammy Watkins -- haven't put him in the best position to succeed.

For NFL teams without a shot at the playoffs, the last few weeks of the regular season are typically about assessing the roster for the following year. Despite how promising the Buffalo Bills' season looked earlier this year, theyâ€™re one of those assessing teams right now as we give them a meager 1.3% chance of making the playoffs despite a solid 14th-place standing in our team power rankings.

The biggest part of Buffaloâ€™s assessment to end 2016 is at the quarterback position. The Bills are starting to question the production of Tyrod Taylor, so much so that it was a debate whether he would be named the starter in Week 15. Coach Rex Ryan eventually came around to state Taylor would remain the starter.

Buffaloâ€™s hesitation on Taylor isnâ€™t just about whatâ€™s best for the team to finish out the 2016 season. In the offseason, the Bills signed Taylor to what, in total, is a five-year, $82.5 million contract. But the option doesnâ€™t kick in until the 2017 season. Buffalo has until March 11th to basically guarantee the first two years and $40.5 million on the contract. While that seemed like a great deal for both sides in August, Buffalo appears to be cautiously approaching the idea of exercising that option.

This season might not have played out like those in Buffalo had hoped, but it doesnâ€™t seem fair to be placing all the responsibility on the quarterback.

Thereâ€™s no question Taylorâ€™s second season as the starter in Buffalo has not come close to his play in 2015, and he certainly deserves some of the blame for that.

By our Net Expected Points (NEP) metric, Taylor is in the bottom third of quarterbacks on a per-drop-back basis. Among 38 quarterbacks who have dropped back at least 100 times this season, Taylor ranks 25th in Passing NEP per drop back. Thatâ€™s not good, but it does rank above quarterbacks like Eli Manning, Joe Flacco, and Cam Newton -- not one of whom are being questioned as their team's starting quarterback.

Taylor's numbers donâ€™t come close to what he did last season, when he was one of the most efficient quarterbacks in the league.

Taylor's efficiency last year was due in part to many high-risk, high-reward throws, which placed his Success Rate -- the percentage of plays that positively impact NEP -- towards the bottom of the league. This season, he's had less help creating the big plays that allowed for the high-risk, low-success type of play.

The Bills have not been a hotbed of wide receiver success in some time, which is probably an understatement. Sammy Watkinsâ€™s 1,000-yard receiving season last year was the first in Buffalo since Steve Johnson did it three straight years from 2010 to 2012. Before Johnson, it was Lee Evans in 2008.

Watkins, the former No. 4 overall pick, is clearly Buffaloâ€™s best receiver, but heâ€™s barely been on the field in 2016. Heâ€™s played in five games, but itâ€™s possible he hasn't been fully healthy for any of them. Watkins had foot surgery in the offseason, which sidelined him for part of training camp and eventually caused him to be placed on injured reserve after Week 2.

Watkins is just now seeing more time in games, but he also sat out of practice on Wednesday and only got in a limited session Thursday. In the three games since coming off IR, Watkins has played on 45.5%, 68.1% and 94.2% of Buffaloâ€™s offensive snaps.

As you'd expect, Taylor is a significantly different quarterback when Watkins is on the field. Take a look at Taylorâ€™s splits over the past two seasons when Watkins plays and when he doesnâ€™t, per the RotoViz Splits Tool. 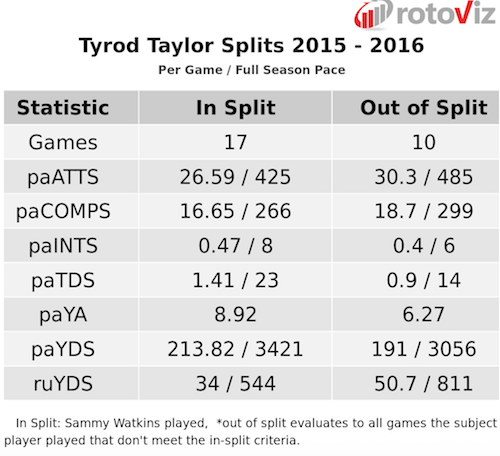 Not only does the absence of his top target hurt Taylor's passing numbers, he also starts to rely more on his feet to make plays. This isnâ€™t just because Watkins is a great receiver or that Taylorâ€™s and Watkinsâ€™s strengths mesh quite well together -- namely the deep ball.

Without Watkins for much of the season, Taylor was left with a scrap heap of receivers. Robert Woods has been Buffaloâ€™s top receiving option sans Sammy. Woods is a fine and often underappreciated possession receiver -- heâ€™s 33rd in Reception NEP per target among 82 receivers with 50 or more targets on the season -- but heâ€™s not the type of player whoâ€™s going to be the top target of a successful passing game.

Behind Woods, the depth chart includes Marquise Goodwin, Justin Hunter (on his third team this season), and Walt Powell. Powell is now on IR, but he has still played the third-most snaps among Billsâ€™ receivers this season. There's also Charles Clay at tight end. Clay is tied for the team league in targets and ranks 23rd in Reception NEP per target among tight ends with at least 50 looks.

Buffaloâ€™s dominance in the run game -- they're first in Adjusted Rushing NEP per play -- might suggest to some that the offensive line has been playing well, but that hasnâ€™t been the case. The Billsâ€™ success on the ground has been more about the ability of LeSean McCoy and the other backs to get themselves to the second-level of defenses rather than finding holes created by the line.

The blocking has been even worse on pass plays. Per Sports Info Solutions charting data from Football Outsiders, the Bills have allowed the fourth-highest rate of pressure on passes this season. Last season, the Bills were around league average, checking in 16th in offensive pressure allowed. That increase in pressure in addition to the decrease in receiving options does not create an ideal environment for any quarterback.

If the Bills do decide to move on from Taylor, there are a few options who could be available. Thereâ€™s rookie fourth-round pick Cardale Jones, who offensive coordinator Anthony Lynn recently described as â€œwhat you want waiting on the runway,â€ but he doesnâ€™t appear ready just yet to take over an NFL offense.

There would also be candidates via trade and free agency such as Tony Romo, Jimmy Garoppolo and Jay Cutler -- or possibly Kirk Cousins. It would be hard, though, to guarantee any of those options would be better than Taylor given the circumstances and makeup of the team.

Of course, itâ€™s likely that if Taylor goes then Rex Ryan goes out as coach, too, which could lead to a complete overhaul of how the Bills want to structure their franchise. Ryan is a defensive coach whose defense has declined from 16th in Adjusted Defensive NEP per play last season to 18th this season. It should also be noted the Bills ranked second under defensive coordinator Jim Schwartz the year before Ryan took over.

Buffalo has a lot of questions to answer heading into the offseason, and what to do at quarterback is one of them. Itâ€™s hard to say the offense hasnâ€™t disappointed this season, but it might be harder to say Tyrod Taylor is its biggest problem.

Andrew Luck Is Having Another Pretty Average Season

This Is Easily the Best Season of Matthew Stafford's Career