DeMar DeRozan and Kyle Lowry Are Still Awful in the Playoffs

The Toronto Raptors have had a strange few seasons. We can probably all agree on that.

They ended a playoff drought that began in 2008 by going 48-34 in 2013-14, earning the 3 seed in the Eastern Conference. They wound up losing to the Brooklyn Nets in seven games in the opening round.

They went 49-33 the following year, winning the Atlantic Division for the second season in a row, but were swept in the first round by the Washington Wizards (and, coincidentally, Paul Pierce again).

They weren't deterred. In 2015-16, Toronto won a franchise record 56 games and clinched the 2 seed in the Eastern Conference. They outlasted the Indiana Pacers in seven games in the first round, and the Miami Heat took them to seven in the semifinals, but Toronto prevailed.

They lost to the eventual champion Cleveland Cavaliers in six games in the conference finals.

But in some ways, the expectations kept getting higher.

Entering this season, the Raps had been there before and had some experience. For a time, they had the most efficient offense in league history to start the season, the 1 seed Boston Celtics are one of the weakest in league history, and the Cavaliers can't stop anyone defensively.

This could have been the year.

Toronto entered the playoffs with a 74.16% chance to defeat the Milwaukee Bucks in round one but find themselves down 2-1 after three games.

It's just evident they're only going as far as Kyle Lowry and DeMar DeRozan can take them.

To be fair, Lowry and DeRozan are in an unenviable situation. The pair is vastly underrated during the regular season and, apparently, grossly overrated come playoff time.

By our nERD metric, which indicates how many wins a player would add to a .500 team as a starter over a full season, Lowry (11.3) ranked 16th this year even in limited action, and DeRozan (8.4) ranked 22nd.

They led the Raptors to some of the best regular season finishes in the NBA in recent years, but they just become different players in the playoffs, year in and year out.

During the 2016-17 regular season, DeRozan posted an effective field goal percentage (which adjusts for the fact that three-pointers are worth more than two-pointers) of 47.7%. That was a career high, if you exclude his 50.2% mark on 512 field goals in his rookie year of 2009-10.

Lowry, one of the better three-point shooters in the NBA, posted a 56.9% rate -- easily a career best. He had been above 50.0% in effective field goal percentage three times in his career but never better than 51.6%.

Through three games of the playoffs, DeRozan's effective field goal percentage is just 34.0%. Lowry's is 42.4%.

Here's that in table form in case it helps.

And that's not all. It's not just a three-game sample that's problematic.

Among 68 active players, DeRozan is last, and Lowry is 63rd. Of the qualified players in the playoffs, Lowry tops just Jamal Crawford (43.2%) and Zach Randolph (44.1%).

These are high-usage All-Stars on a team with genuine title aspirations we're talking about.

With DeRozan, you take what he gives you offensively.

Coincidentally, first-round opponent Giannis Antetokounmpo (14.3%) was fifth-lowest in that subset. He's managing a 58.7% effective field goal percentage against the Raptors.

For comparison's sake between the pair of two-point-dependent players, here is DeRozan's shot chart through Game 3. 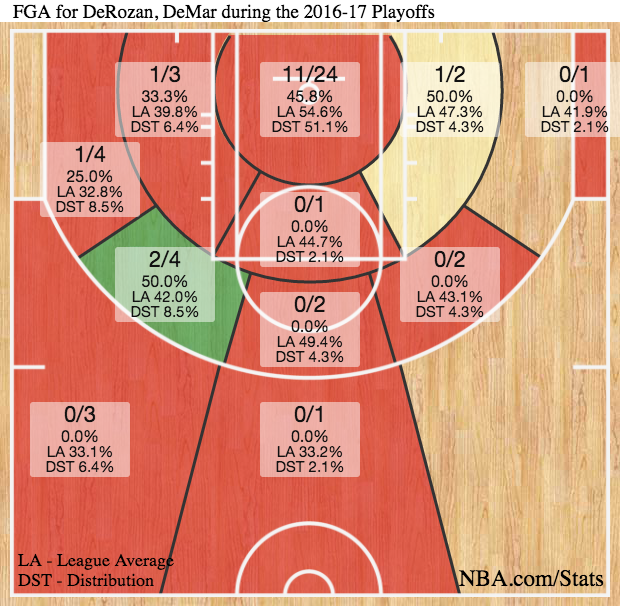 Compare that to the chart of Antetokounmpo. 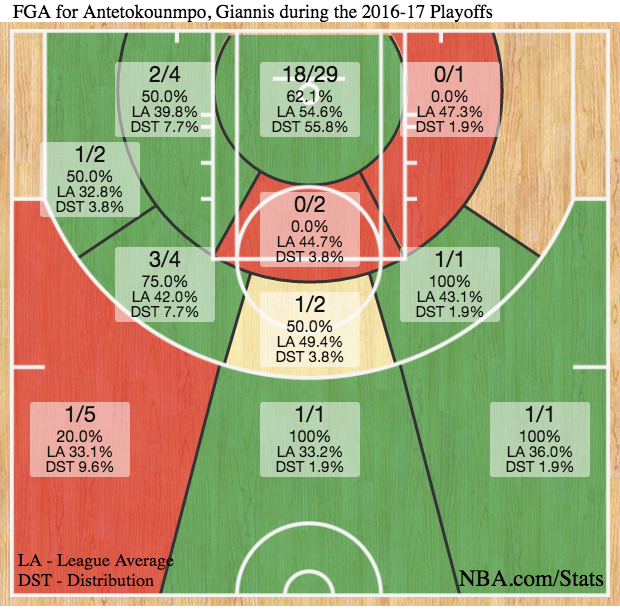 The two-man lineup of Lowry and DeRozan has combined for a net rating of -20.4 together through three games against the Bucks.

Yet through it all, the Raptors are still 47.18% likely to win the series, according to our algorithms.

Let's not forget that this team had the sixth-most efficient offense in the league this season (112.3 offensive rating) as well as an above-average defense (107.8) -- and that Milwaukee was a -0.2 in terms of net rating, scoring 109.1 points per 100 possessions and allowing 109.3.

You just wouldn't know it by watching these games, as the Bucks are averaging 111.4 points per 100 possessions compared to 98.4 for the Raptors through 12 quarters.