It's nearly mid-February, and that means that fantasy baseball draft season -- and prep season -- should be in full swing. If you aren't in that mode and plan on playing in many leagues, you are falling behind your competition.

One source for some great data points is the National Fantasy Baseball Championship (NFBC) ADP. It shows what drafters are doing today, and it can inform how you need to construct your rosters appropriately, which is one of the most important pieces of fantasy baseball.

Today, let's focus on some pitchers to target. When looking at the draft numbers for these guys, it's important to keep in mind not only their ADP but also their minimum pick. Savvy owners will target certain players, and if you believe in the upside, you have to be ready to select them a bit earlier than their ADP.

Here are four players primed for monster 2020 seasons who should be worth taking a little earlier than their listed ADPs. Note that all ADP data is from January 15, 2020, to February 9, 2020 (108 drafts).

Simmer down, my friends, because Darvish was a boss down the stretch.

Darvish unleashed his slider with greater frequency, and this pitch nearly earned the prestigious Money Pitch status from the Pitcher List team. It generated a nasty 16.0% swinging-strike rate with a 39.6% chase rate. When he leaned on it, it was lights out.

At this point, Darvish has the makings of a fantasy ace, and he can be had at a discount price. Just beware of that minimum pick (47th), as his stock could be rising quickly.

The background on Frankie Montas of the Oakland Athletics could be a little bit fuzzy for you. He was suspended last year for 80 games for testing positive for a banned performance-enhancing drug.

What people may fail to realize is that he was absolutely brilliant prior to his ban -- and it was due to the addition of a splitter. Prior to 2019, Montas was effectively a two-pitch pitcher, but he added a splitter, which he threw 18.3% of the time with incredible success -- a 45.7% chase rate and 21.3% swinging-strike rate, leading to a pithy 37 wRC+ on 272 pitches thrown. Oh, baby.

Over at oddsFire, Oakland is pegged as the second-best team in the AL West, and they should be a strong team once again. Montas is going at a fair price and can be a great middle-of-the-rotation arm in fantasy,

I'm trying to lead the charge on the Zac Gallen hype train for the 2020 season. Peep some of this goodness from last year if you need a refresher on the then-rookie hurler.


Let's wax poetically on how good Gallen was as a minor leaguer, as he has made stops through the St. Louis Cardinals organization and the Miami Marlins organization before coming over to the Arizona Diamondbacks a season ago.

Gallen's walk rate in Double-A was ugly as part of the Marlins, driving a high WHIP, but he started to showcase some improvement in 2019 across multiple stops. This was largely buoyed by an outstanding 21.3% swinging-strike rate and a .211 wOBA. That's legit.

In addition, the humidor in Arizona has clearly made an impact. Looking at ESPN's park factors, Chase Field played as the third-friendliest run environment in 2017, and dropped to 16th in 2019. That's great for a guy like Gallen.

If you want a middle-of-the-rotation arm with tons of upside, Gallen is your man.

In his first full season as a starter at the major league level, Max Fried of the Atlanta Braves took a major leap forward, recording 30 starts and 165 2/3 innings pitched with a 3.83 SIERA, 24.6% strikeout rate, and 7.6% fly-ball rate. It was a very solid rookie season.

What makes Fried an even more curious case moving forward is that he recorded a notable shift in his pitch mix in the last month of the year, shown below via Brooks Baseball. 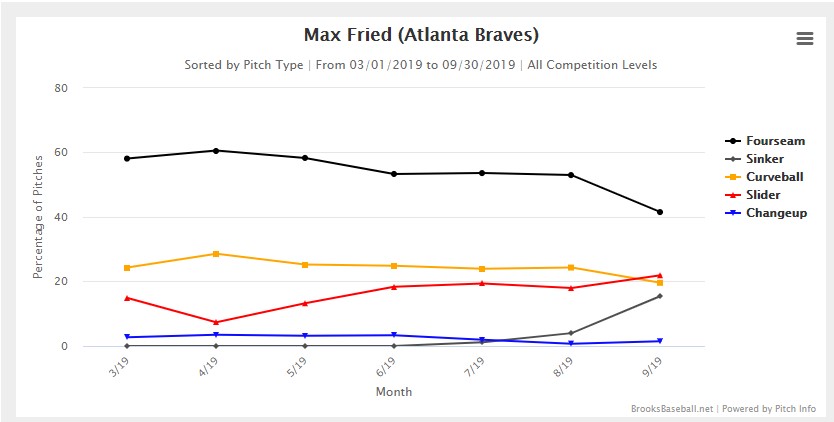 Fried also keeps the ball on the ground very well. For his career, he's allowed just a 21.3% fly-ball rate, and his fly-ball rate was at 22.2% a year ago. Fried looks like a safe pick who offers good upside if he continues tossing his slider as much as he did in the second half.