By now, we all know the Denver Broncos are on the way to the Super Bowl thanks to the play of their defense in the AFC Championship Game.

More specifically, the Broncos defeated the New England Patriots because of their pass rush. Youâ€™ve probably seen the stats floating around by now for how many times Tom Brady was hit when dropping back to pass and how it was more than any quarterback was hit this year.

It certainly helps when the opposing quarterback gets hit often, but in the Broncos' case, the real success came by how Brady was hit and pressured.

The Broncos, notably, did not bring much extra pressure against the Patriots during the championship game, rushing five or more on just 11 of Bradyâ€™s drop backs. What Denver did exceptionally well was change up the defensive looks against Brady while mixing in the added pressure, the standard four-man rush and a heavy dose of a three-man rush that allowed Denver to drop eight men into coverage.

The result, perhaps, wasnâ€™t too surprising to those who paid close attention to the play of Denverâ€™s defense this season.

The Broncos were clearly the number-one defense in the league by our Net Expected Points (NEP) metric. NEP, for the uninitiated, measures the value of each play on the field based on how an average team would be expected to score in each scenario using historical data.

Denverâ€™s defense ranked first in Adjusted NEP per play overall and against the pass and ranked fifth against the run.

There was a bigger gap in Adjusted NEP per play between the top-ranked Broncos and the second-ranked Carolina Panthers than there was between the Panthers and the ninth-ranked Pittsburgh Steelers.

Brady, of course, wasnâ€™t unaware of what the Broncos could do on defense.

During the regular season, New Englandâ€™s quarterback finished the season ranked fourth in Passing NEP per drop back among passers with 100 or more dropbacks at 0.25. In the Week 12 regular season game against the Broncos, Brady was worth 0.16 Passing NEP per drop back, which brings him down between the full season value of Tyrod Taylor and Eli Manning, who ranked 11th and 12th.

Denver didn't make Brady look awful -- he was still able to throw for three touchdowns -- but bringing the fourth best passer to a borderline top-10 quarterback isn't a valueless performance. That was also without Julian Edelman and Danny Amendola in the lineup, both of whom missed the regular season meeting.

Against the Broncos in the second meeting, though, Brady fared much worse.

How much worse -- and why -- is something we looked into by NEP, using some data from numberFire Live.

During the game, Brady had 63 drop backs outside of the two-point conversion that ended the game. On 38 of those -- 60.3 percent -- the Broncos sent four rushers after the quarterback. On those plays, Brady fared okay.

It was well below his season average but much better than he would play against a pass rush that did not come from four players. On those plays, Brady was worth 0.195 Passing NEP per drop back, which would rank between the full seasons of Kirk Cousins and Cam Newton, who ranked eighth and ninth this season by the metric.

Not all of Denverâ€™s four-man rushes were the same, though. The Broncos were able to change the look of their fronts, even without the use of additional rushers in an attempt to confuse Brady and -- more importantly -- the New England offensive line.

The Broncos ran the below front on a few plays against the Patriots, lining no players up over the center or guards, placing more pressure outside on the tackles. (Images and videos courtesy NFL Game Pass.) 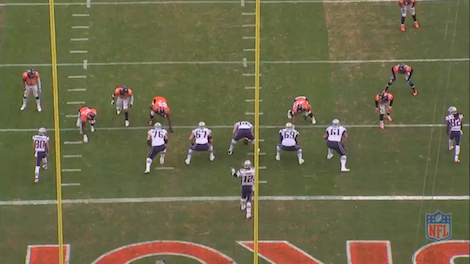 Sometimes it didnâ€™t matter how many players the Broncos brought, or what type of front it was, because Von Miller was going to do incredible Von Miller things.

Take, for example, his third-quarter sack of Brady, made possible by perfectly timing the snap and giving right tackle Cameron Fleming zero chance of getting in any type of block. The broadcast made it appear like Miller was offside on the play, yet somehow, he wasnâ€™t. It was just a perfectly timed jump off the line.

Brady had some hiccups against the four-man rush, but itâ€™s also where he had the most success.

On plays when the Broncos brought more pressure, Brady turned into one of the leagueâ€™s worst quarterbacks statistically. There were eight pass plays during the game when the Broncos brought a five-man rush on Brady, and on those eight plays, Brady had a Passing NEP per drop back of -0.04. Thatâ€™s between the seasons of Tony Romo and Mark Sanchez, who ranked 40th and 41st among the 46 quarterbacks with at least 100 dropbacks during the regular season.

Thatâ€™s bad, sure, but itâ€™s also skewed slightly thanks to a 4th-and-10 deep pass to Rob Gronkowski on the final drive of the game that was worth 4.79 NEP, New Englandâ€™s best offensive play of the game.

Take out that pass, and the NEP per drop back falls to -0.74, almost three times worse than Austin Davis, who ranked as the worst passer in the league this season at -0.26 Passing NEP per drop back.

Against a rare six-man rush, Brady and the Pats were even worse. Denver brought six on only three plays, but those three plays averaged -0.77 NEP for New England.

What was more of a surprise was Denverâ€™s use -- effectively -- of the three-man rush. Many disprove of the three-man rush in general, which typically allows quarterbacks to have enough time in the pocket to navigate around to find an open receiver. A quarterback such as Brady will be especially good at this, avoiding pressure until a receiver can pull away from a defender. That, of course, wasnâ€™t the case on Sunday.

Denver rushed just three men 13 times, and only two resulted in positive plays for New England. Against that rush, Brady had a Passing NEP per drop back of -0.53.

The three-man rush also set up the rush coming on the next play. On five plays when the Broncos brought just three men, they brought five or more on the play directly after.

While the three-man rush was used in part to set up blitzes, the Broncos found success on the plays when they did rush three. This includes Denverâ€™s best defensive play of the game, -4.01 NEP, which was Millerâ€™s interception of Brady.

Miller starts on the line as he would a typical snap but is on Gronkowski the whole play, bumping him off his route as soon as the ball is snapped. This places Miller, unexpectedly to Brady, exactly where the ball is going to be thrown on the pass attempt to the tight end.

The Broncos relied heavily on their defense for most of the year, and it came through again in their biggest game to date.

Itâ€™s unlikely thereâ€™s going to be a similar game plan in the Super Bowl against a much more mobile quarterback in @Cam Newton , but if the production of Denverâ€™s defense is on the level it was against the Patriots, it would be difficult for any quarterback to play well.

That was the case for most of the regular season.

Is Super Bowl 50 the Best Defensive Matchup of the Century?