Will Devin Funchess Be This Year's Kelvin Benjamin?

When the Carolina Panthers drafted Devin Funchess in the second round of May's draft, the response among football circles was similar.

Why are they taking a player who's exactly like the one they already have?

Well, with the news that Kelvin Benjamin is out for the year with a torn ACL, the Panthers will need Funchess to step up and probably be Cam Newton's top wideout.

I don't want anyone to walk away from (close out of?) this article thinking Benjamin had a bad rookie season. It was fine -- more than fine. But there's reason to believe some may think he was better last season, thanks to fantasy football scoring, than he actually was.

In PPR leagues, Benjamin was the 16th best wideout, finishing just one fantasy point behind Calvin Johnson. But from the lens of our Net Expected Points (NEP) metric -- which measures the number of points a player adds for his team versus what he's expected to -- he wasn't as good. It's true that his Reception NEP -- the number of points added on catches only -- ranked 15th, but a lot of that total had to do with volume. You see, Reception NEP is a cumulative metric, and because each catch is naturally going to add expected points (how often do you see a completed pass do something negative for a team?), more volume generally means a higher Reception NEP total.

But Benjamin ranked seventh among all NFL wide receivers last year in targets. And when you divide that Reception NEP total by the number of targets Benjamin saw, things aren't all that efficient. Among the 56 wideouts who saw 50 or more receptions last year, Benjamin ranked 31st, finishing in the 44th percentile.

Again, this isn't "bad" by any means. He was a rookie, so he's not going to necessarily be as good as he will in, say, three years. And 50-plus reception wideouts are generally going to be good receivers -- if they're catching that many balls, then their quarterbacks must see them as decent threats.

This merely shows a comparison between what actually was happening to what happened in fantasy. He was a near WR1 in the fake game, but he was a pretty average high-volume guy in real football.

That's a good thing for rookie Devin Funchess, because it means he doesn't have to necessarily set the world on fire to be relevant. And given his measurables in comparison to Benjamin, there's some reason to believe that he can step in and fill the void.

And for all you visual learners, here's a better look at the two wideouts, courtesy of MockDraftable.com. 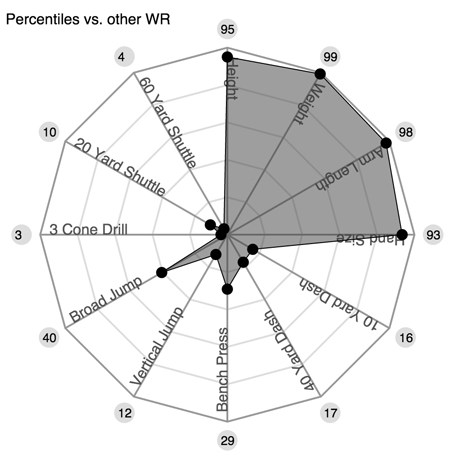 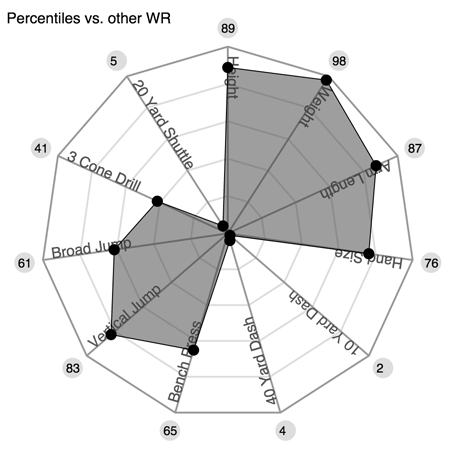 The similarities are pretty insane, as Benjamin has a little more size and slightly more speed to his game compared to the stronger tight end-wide receiver hybrid in Funchess. But these charts are exactly why folks were confused by the Panthers' selection in May's draft -- the team needed a good wideout with speed, and ended up getting a 4.7-guy who kind of runs like a dad.

Regardless, the interesting point here is how similar these two wide receiver profiles are. The receivers are twins.

Funchess won't automatically now step in and produce like Kelvin. Not at all -- if you were to promise me 1,000 yards and 9 touchdowns for Funchess today, I'd take that all day long. Physically, though, things are looking good for Funchess as a replacement for Benjamin.

Will the Volume Be There?

A reason for Benjamin's cumulative success last year, as I mentioned, was volume. Only six wide receiver saw more targets over the course of the season, and that really lifted his overall numbers.

The key to this volume was a lack of competition. The 2014 Panthers saw wide receivers like Jerricho Cotchery, Jason Avant, Corey (Philly) Brown and Brenton Bersin catching passes from Newton. Greg Olsen was the stud he always is, but the wide receiving group was, to put it kindly, pretty terrible.

That's no different in 2015. Brown currently sits atop the depth chart, and Cotchery will slide into a "starter" role as well. Avant was cut halfway through last season, and the team brought back speedster Ted Ginn Jr., who found some success in 2013 with Carolina before signing a deal in San Francisco last offseason.

You don't need analytics to tell you this group of receivers isn't strong. It's filled with undersized, unproven players, and veterans who have never sustained excellence at the NFL level.

That's a point for Funchess.

Just don't expect the same type of volume that Benjamin saw. Not only does Funchess have a lot to still prove, but the Panthers ended up dropping back to pass (includes sacks) 588 times last season, which was 72 more than their 2013 number. The 588 drop back total was actually the highest the team has seen since 2001.

But 100 targets really isn't out of the question, even with a dip in passes thrown. That would still give Funchess fewer than 20 percent of his team's targets for this upcoming season, which would more than likely rank past 30th in the NFL at the wide receiver position.

So we know Funchess has a similar physical profile to Benjamin. What we don't know is if Funchess can translate that to the NFL field like Benjamin [sort of] did, and whether he'll see the same type of volume Benjamin saw.

The former -- his skill set -- seems like something that can go in either direction. Remember, Benjamin wasn't that good of a rookie wide receiver -- much of his success came due to volume. And just to reiterate, it's not that Benjamin was bad, especially for a rookie. He just wasn't top-15 good. That means Funchess doesn't need to be quite as effective as many would think, which is good for his potential.

A problem Funchess may run into -- and this is key for fantasy owners -- is volume. There's almost no chance Funchess will see the 145 targets Benjamin did last season, especially considering the Panthers threw the ball more than they have over the last decade-plus in 2014.

This isn't an ideal situation for Carolina, but at least they have a first-year guy who could end up being a similar player to what they in the rookie they had last year. It could be a lot worse.