"Luck is what happens when preparation meets opportunity."

What does it take to be the best wide receiver in the NFL?

No, to become the top wideout in the league a receiver needs to get a little lucky. That is, he needs all these factors to come together perfectly in order to achieve this feat.

And for Julio Jones next season, the Atlanta Falcons wideout finds himself in this precise situation. Julio stands at the intersection of several ideal situations that taken all together puts him at the cusp of becoming the top wide receiver in the NFL.

For the 2015 season, the 6'3", 220-pound Julio Jones will enter his fifth year in the league as a supremely talented 26-year-old wide receiver.

We can see that Julio will soon find himself with the perfect mix of physical attributes, age, and experience to make a legitimate run for top wide receiver honors in the NFL.

Looking beyond these factors, the signs of Julio hitting his peak sooner rather than later are also readily evident when we focus on his career numbers thus far on a per-game basis,. 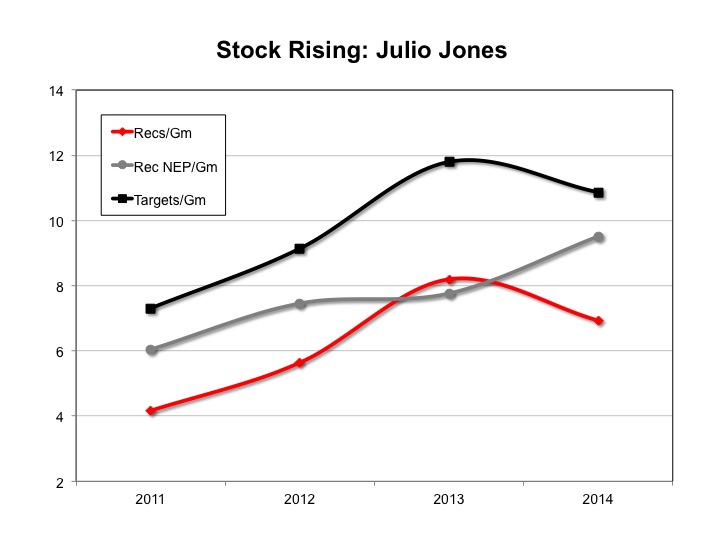 Using his ideal build and dominating athleticism, Julio has increased his targets, receptions, receiving yards, and Reception Net Expected Points (read more about Net Expected Points, or NEP, in our glossary) every season, culminating in a 1,593 yard, 6-touchdown performance over a 15-game span last season.

Taken together, its clear that these factors -- his build, athleticism, age, and experience -- have prepared Julio to not only stay on track of the trajectory his career has followed thus far, but puts him in an optimal position to vastly exceed these expectations next season.

Julio Jones spent much of the early part of his career with Atlanta playing receiver 1b to Roddy White's receiver 1a role. This shared workload and struggle for supremacy in the Falcon's offense was most apparent in the 2012 season, where Julio and Roddy seemed to alternate big games with one another on a weekly basis. 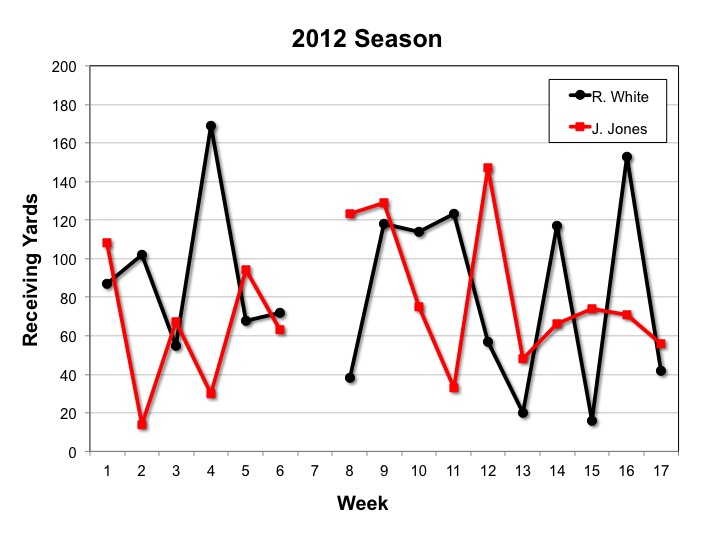 We can see that, during these early years, despite all his physical gifts and talents, having another big mouth to feed in this offense made it nearly impossible for Julio to truly breakout as an elite receiver.

However, as Roddy has started to show signs of aging as of late, Julio has seized this opportunity to fully overtake Roddy for the lead receiver role on the Falcons.

As we follow both these receivers careers since Julio's rookie season with Atlanta in 2011, similar to the trends seen during the 2012 season, we can see that the two wideouts paths continue to diverge from one another. 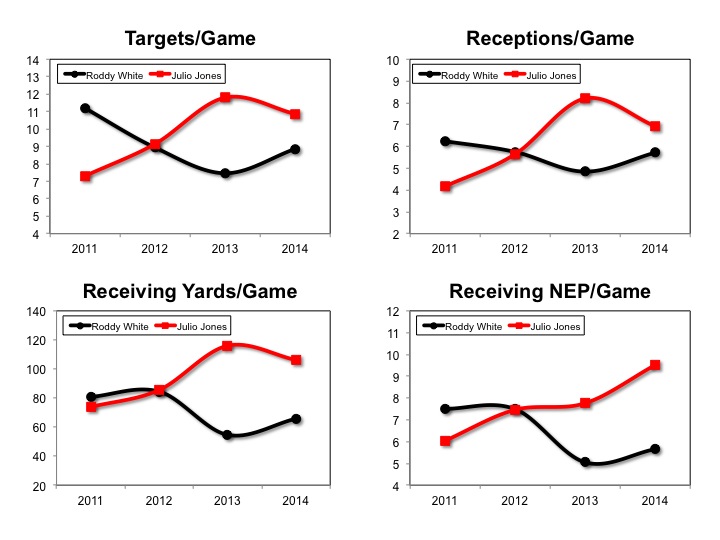 While Julio has seen his stats rise in every category -- including targets, receptions, receiving yards, and Reception NEP -- on a per-game basis each subsequent season, Roddy has seen a complementary decline in his numbers. It's clear that after playing second-fiddle to White his first few years with Atlanta, Jones is now the undisputed primary receiver for this team.

And the significance of this changing of the guard becomes even more apparent when we consider that the new offensive coordinator for Atlanta next season will be Kyle Shanahan.

Why is that you might ask? Because Kyle Shanahan has never met a primary wide receiver he didn't like.

In his stints as the play-caller for Houston and then Washington, the primary receivers for these teams have all received a significant boost in targets, receptions, and Reception NEP under his watch compared to the seasons flanking his tenure with each team. 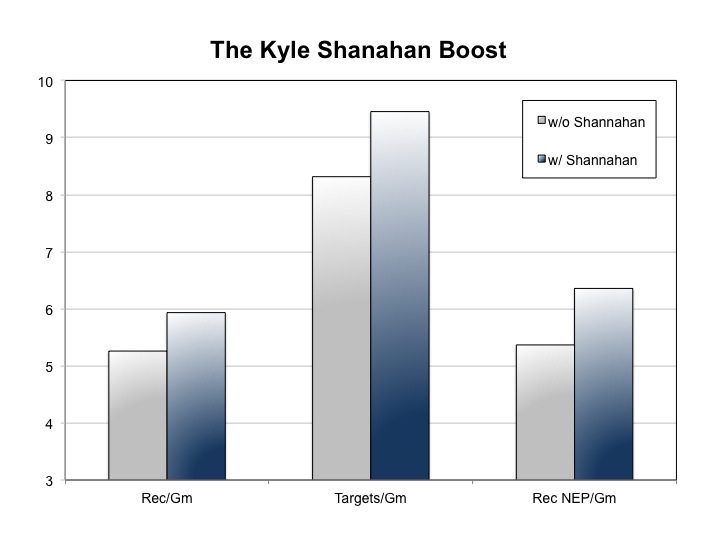 As mentioned previously by our own Joe Redemann, by utilizing a quick-hitting, horizontal game plan, the lead wide receivers for Shanahan's offenses have, on average, enjoyed a nearly 15% bump in receptions and targets per game and an almost 20% increase in Reception NEP compared to the seasons directly prior to and following his arrival.

Shanahan's heavy reliance on his primary option in the passing game is evident in the overwhelming number of targets his players have averaged in his six seasons in Houston and Washington. Coaching the likes of Andre Johnson, Santana Moss, Jabar Gaffney, and Pierre Garcon, these wideouts have averaged 9.5 targets per game (or 152 targets per season). And twice -- Andre Johnson in 2009 with 171 targets, and Pierre Garcon in 2013 with 183 targets -- a Shanahan receiver has led the league in this category.

With Julio Jones' strong chemistry with quarterback Matt Ryan and with physical talents rivaled only by that of Andre Johnson's from the aforementioned group, Julio Jones could do some major damage to opposing defenses with the type of workload Shanahan likely has in store for him next season.

Putting It All Together for 2015

Despite playing just 15 games last season, Jones still managed to finish third in the NFL in receiving yards, putting up a career high 1,593 yards to go along with 104 receptions and 6 touchdowns. In terms of advanced metrics measuring his actual contributions to his team's success, his 142.69 Reception NEP places him second in the league, behind only Antonio Brown's 151.91.

To say that Julio Jones had a good 2014 season is an understatement.

But if the historical trends mentioned above hold true for next season, Julio Jones has much more in store for us in 2015.

If we project Julio's 2014 numbers over a 16-game stretch, and apply the average 'Kyle Shanahan bump' that receivers in Houston and Washington have enjoyed from his play-calling, we can see from the table above that Julio has the potential to put up a MVP-worthy performance next season.

His projected 124 receptions on 196 targets would just edge Antonio Brown's league-leading 129 receptions on 181 targets in 2014, and his 179.6 reception NEP would be the highest total for any receiver from the past 15 years.

As Jones enters the prime of his career as the top receiver on an offense that will look to their lead wideout early and often, he may just very well find himself breaking a few records by the end of next season as he leads the Falcons in their quest for the NFC South division title.

When Do Elite Wide Receivers Hit Their Primes?