When Do Elite Wide Receivers Hit Their Primes?

Joseph Juan  —  @FF_Scientist Mar 9th, 2015
Share on Facebook Share on Twitter
Using historical analytics from top wide receivers over the past 15 seasons, which wide receivers are ready to break out, and which ones are past their primes?

The start of the 2015 NFL offseason has been a whirlwind of activity, and right in the heart of this flurry have been young, elite wide receivers.

Dez Bryant and Demaryius Thomas have been franchise tagged by the Cowboys and Broncos, respectively. Randall Cobb is set to re-sign with the Packers. Other young studs such as Torrey Smith and Jeremy Maclin are set for reunions, as they travel to new teams cross-country -- Smith finds himself reuniting with former teammate Anquan Boldin in San Francisco, while Maclin finds himself once again under the command of Andy Reid in Kansas City.

So with all this movement and front office maneuvering, what can we expect from these elite wide receivers, and will they be worth all the money being thrown at them as NFL general managers bid for their services?

I began work on this question by tracking the careers of the top-tier wide receivers in the NFL to identify when these athletes typically hit their primes and the length of time they remain elite. To do so, I began by compiling a list of wide receivers since 2000 who have been selected to at least one Pro Bowl and whose careers span six or more seasons within the past 15 years. This gave me a list of 28 players to incorporate into my analysis.

From this list of athletes, I then measured their productivity on a season-to-season basis as measured by total Reception Net Expected Points (NEP), normalizing each player's production to their "peak season" in which they produced their highest total Reception NEP.

Taking the average relative Reception NEP of all 28 wide receiver Pro Bowlers on a per-season basis produced the following trend below. 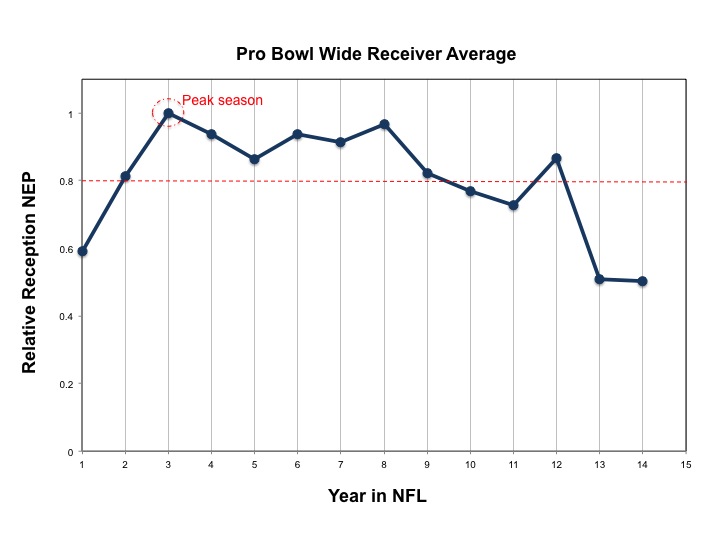 On average, these elite wide receivers tended to increase their productivity from their rookie season up until their third season, when athletes seemed to hit their peaks. Upon hitting that peak, players hit their "prime seasons," maintaining this elite level of production (defined as total Reception NEP within 80% of their peak production) for an additional six seasons, until they eventually begin a steady decline below these levels.

Taking a closer look at the distribution of when these athletes hit their peaks, we come upon an interesting finding. 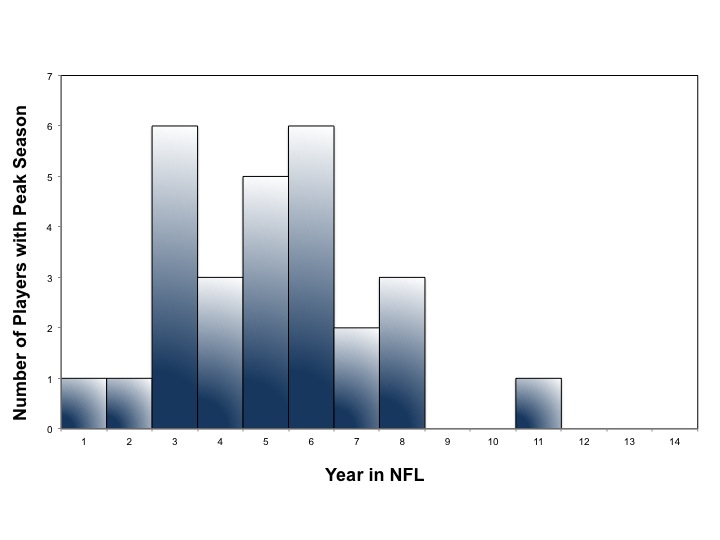 "Age Ain't Nothing But a Number"

So far we see that there is a strong relationship between the productivity of our Pro Bowl wide receivers and the number of seasons they've played in the league, but can the same be said for their age? To answer this question, I again did the analysis described above, but instead aligned players according to their age: 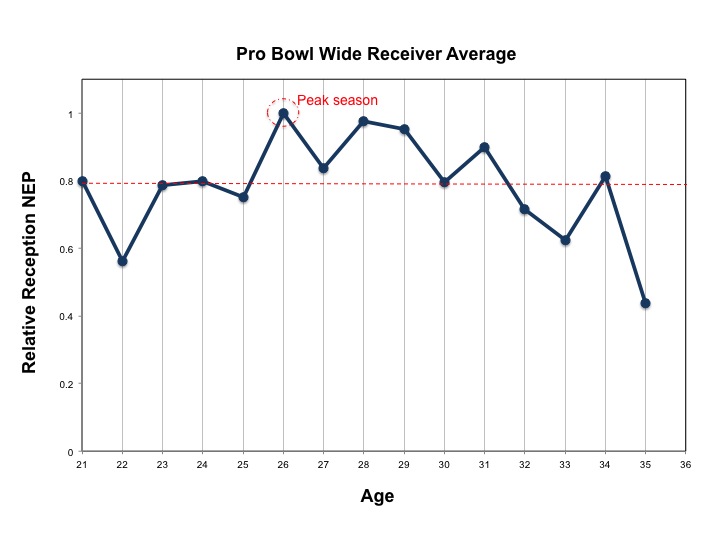 Here we see that, on average, our elite wideouts hit their peak around their 26th birthdays and maintain this level of production up until their 32nd birthday (again, approximately six seasons after hitting their prime), when they begin their steady decline from the top.

The distribution of when these athletes hit their peak seasons displayed an even more concentrated clustering of athletes than what was seen for experience. 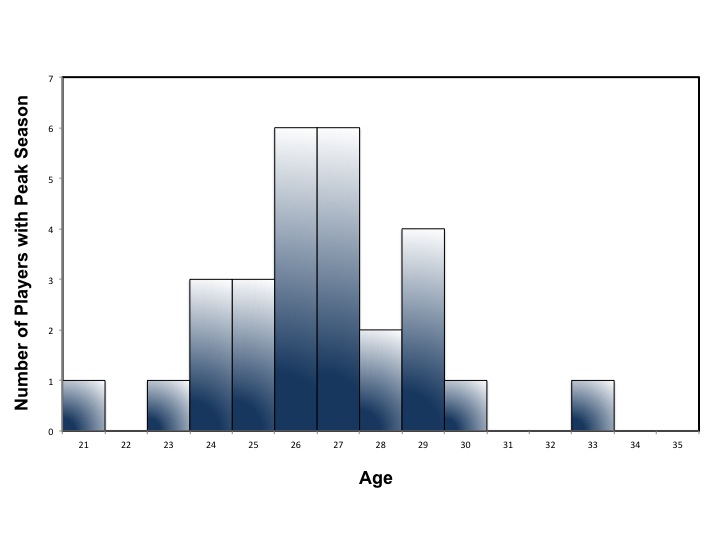 We find that there is an even stronger connection between the age in which a player hits their peak than what we observed between years in the NFL and a player's peak. Nearly half of the wide receivers in our study (12 out of 28) hit their peaks between the ages of 26 and 27. Not surprisingly, the list of players falling in this group include some potential future Hall-of-Fame wideouts Steve Smith, Sr. (peak season at age 26), Andre Johnson (27), Roddy White (27), and Calvin Johnson (27).

Therefore, based on this work, it seems that elite wide receivers of the modern NFL era tend peak when they hit a particular combination of age and experience. Logically, this makes sense: these athletes are hitting their physical primes as they enter their mid-20s and have just enough experience under their belts that they can truly begin to exploit the complex NFL schemes employed by their coaching staffs to beat opposing coverages consistently.

"Don't Call It a Comeback"

But what happens to players after hitting these prime seasons? As mentioned previously, these players typically hover within 80% (or more) of their peak year performance for an average of six seasons. But after these prime years, when these athletes begin their slow but predictable fall from grace, oftentimes fans, coaches, and general managers alike are found waiting for the bounce-back season that rarely ever comes. Rather, these players begin a steady decline in production season after season.

These patterns are evident when we examine some of the more "seasoned" veterans in the NFL. Below are the career arcs for three NFL veterans whose careers seem to be following this downward trend. 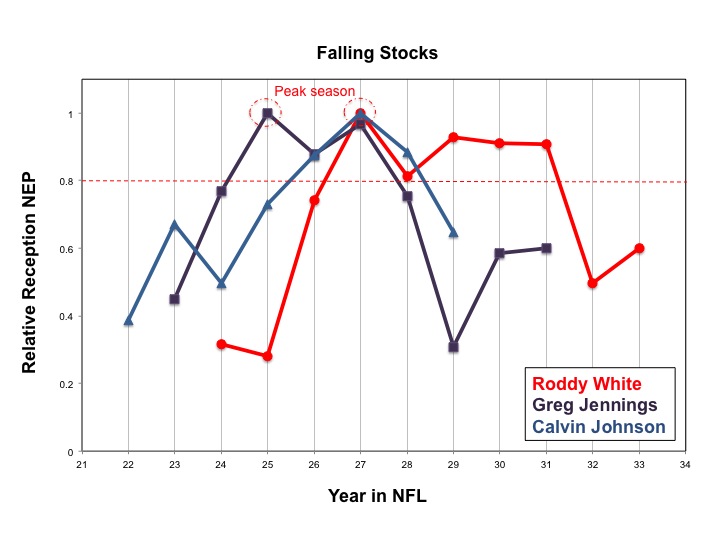 While the career arcs for the two players listed here north of the 30-year-old line (Roddy White and Greg Jennings) may not surprise most readers, our conclusions regarding Calvin Johnson may not be as easy to swallow. Many will argue that, although Calvin is indeed crossing the 30-year-old mark this upcoming season, he is far from over the hill and still has a number of elite seasons ahead of him. Others will point to the number of injuries befalling him last year as excuses for his off production in 2014. But for those taking an objective stance on the matter using the above analysis to forecast the remainder of Johnson's career, the smart money is that Megatron never sees a season matching the glory of his 2012 season, when he led the league in receptions (122) and receiving yards (1,964). Instead, it is more than likely that Calvin Johnson continues a steady decline out of the league's top-tier to make way for some of the younger stars eagerly waiting to take his spot.

Our analysis reveals that receivers in the top tier of the NFL tend to put up elite production between their third and sixth seasons in the league, between the ages of 26 and 27. Consistent with this, entering his fifth season in 2014 at the age of 27, new Broncos wide receiver Emmanuel Sanders set career highs in receptions (101), receiving yards (1,404), touchdowns (9), and Reception NEP (125.70), nearly doubling his previous marks for each of these categories. 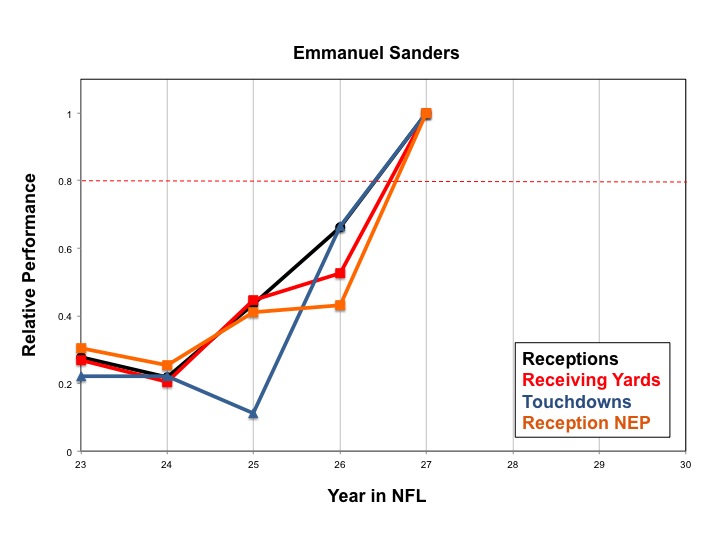 Sanders is at the perfect level of experience and age to continue his elite production for the near future: he is entering his sixth season in the league at the ripe age of 27. Of course, playing with Peyton Manning certainly helped, but based on this same criteria, a few notable players could be expected to enter the primes of their careers soon.

*Maclin missed the entire 2013 season due to injury (torn ACL).

A few names jump out at us right away, including Randall Cobb, Dez Bryant, and Demaryius Thomas. When we track the career paths of these aforementioned players, it's obvious that they are trending toward the primes of their careers and are on trajectories to take dominant positions in the league for the foreseeable future. 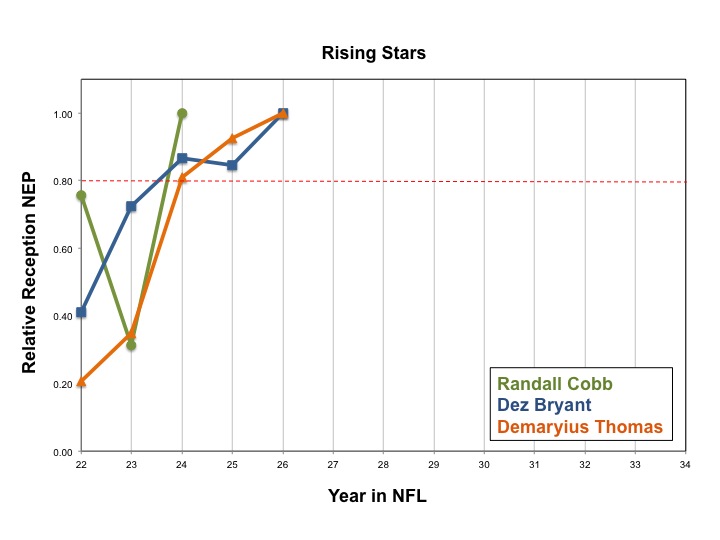 Dallas, Denver, and Green Bay have made prudent decisions to pony up the money required to retain the services of these young superstars. The Packers re-upped Cobb to the tune of $40M over the next four years, while the Cowboys and Broncos have slapped franchise tags on Dez and Demaryius. The importance of both Dez and Demaryius to their respective franchises is evident in the lengths these teams have made to free up cap space to offer these players large contracts -- the Cowboys are practically allowing DeMarco Murray to walk away from the team despite his MVP-worthy performance last season, while the Broncos have forced Peyton Manning to restructure his contract to remain with the team.

But the same can't be said for all the other teams in the NFL with young, promising wide receivers with expiring contracts. While the Cowboys, Broncos, and Packers have made moves to keep their rising stars, the Eagles and Ravens have allowed their studs to find new homes for 2015.

From our analysis and projections, the Eagles and Ravens may have made huge blunders by letting these two young wideouts walk this offseason. These athletes are just entering their primes, and heads may roll if Maclin and Smith can produce career-best numbers as members of new teams this upcoming season, as our data predicts. And the decision to part ways with these players will only be exacerbated if their former teams decide to replace them with some of the aging wideouts on the market such as Andre Johnson, who hit his peak six seasons ago back in 2008 and is set to enter his 13th in the league at the age of 34.

In the NFL, timing is everything. And in today's passing league, if a team wants to compete on offense, it's clear that those throwing money at the wide receiver position must weigh heavily a player's age, experience, and current position and trajectory on their career arc to be sure who to make these investments on.

Who Is the Most Dangerous Receiving Threat in the NFL?