That's what made him so valuable.

It's not common for running backs to exceed expectation the way Robinson did last year, but we do see a handful of backs outperform their projected output by a wide margin each season.

The question is, can we accurately predict who those running backs will be? Is there a way to increase our probability of finding a mid- or late-round breakout running back?

The only way we can really answer this question is if we define what a breakout running back even is. So let's do that. 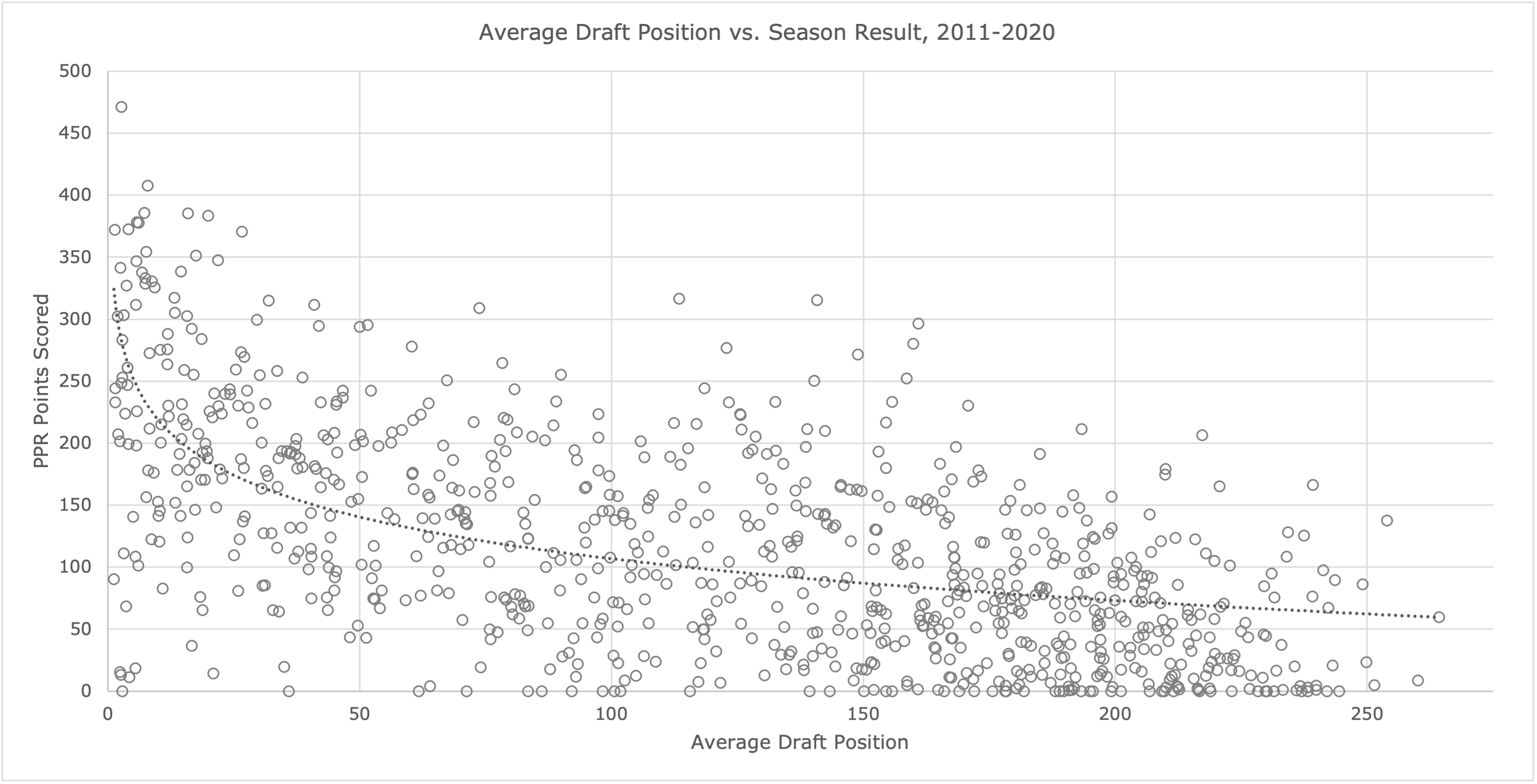 The scatterplot above is showing every running back who's been drafted over on MyFantasyLeague.com since 2011. The x-axis represents overall average draft position (ADP), and the y-axis is showing the number of PPR points scored by that running back.

The result is a trendline that tells us the number of points we'd expect a running back to score at a particular ADP.

For example, a running back selected at Pick 100 would be expected to score a little over 100 fantasy points. A running back picked at Pick 50 has an expectation that's slightly below 150 points.

We'd expect a breakout player to be one who exceeded expectation by a whole lot of points -- one who's sitting far above the trendline.

If our goal is to find middle- and late-round breakouts, the focus should be on the middle and late rounds. Duh.

Is this arbitrary? Sort of. After Round 5 in fantasy drafts, opportunity cost tends to flatten a bit. And 100 is a nice, round number.

Using that criteria, we've had 44 breakout running backs since 2011.

If this all sounds familiar, it's because you're probably a numberFire truther. Yours truly has done multiple studies on spotting breakout running backs over the last few years using this same methodology.

And not a whole lot has changed from those studies. Breakout running backs tend to not be handcuffs, they come from ambiguous backfields, they're typically pass-catchers, and they're surprisingly of all ages. Rather than rehash all of that, if you're interested in seeing the numbers and data that back these trends, you can take a look at the study from a season ago.

The ambiguous backfield trend was the one that readers seemed to latch onto most. When we're drafting, it makes a lot more sense to avoid a traditional handcuff and opt for a running back on a team whose top running back isn't being selected very high.

And this intuitively makes sense. If the top running back on a team is being selected in, say, Round 5, then that means we collectively don't have a lot of confidence in that player. If there's not a lot of confidence, then there's a better chance that backfield is just naturally taken over at some point by a player without an injury.

Meanwhile, a handcuff needs an injury. The only reason Mike Davis -- one of the four running back handcuffs who've hit over the last decade -- was a thing last season was because Christian McCaffrey got hurt. It wasn't because he just overtook the backfield, stealing it from a stud running back.

But what if we could more accurately find which ambiguous backfields to target? What if there was a way to be more accurate when spotting these breakout running backs?

Targeting a Team's Top Running Back

For example, in 2020, David Montgomery became a breakout running back. He was selected at Pick 78 according to My Fantasy League's data, and he exceeded ADP expectation by over 146 fantasy points. He was also the first running back from his backfield -- the Chicago Bears backfield -- selected. Tarik Cohen, his teammate, was taken about 10 picks after him on average.

It's not all that rare for a team's RB1 to be selected after Pick 60. We've seen it happen 106 times over the last 10 years. Considering we've had 10 running backs break out who've been drafted as their team's RB1, that gives us a breakout rate of 9.4% for this type of back. Or, to phrase that another way, since 2011, 9.4% of team RB1s drafted after Pick 60 have exceeded their ADP expectation by 100 or more points.

That rate is higher than what we've seen from running backs who were drafted after a running back teammate.

This really shouldn't be a surprise. Most team RB1s are going to be gone by the double-digit rounds, so they're at an advantage when compared to team RB2s, RB3s and RB4s. Of course they'd have an edge when the "RB2 or worse" bucket is capturing far more no-name players who won't even sniff a professional football field.

To help with this problem, instead of looking at Pick 60 and beyond, let's narrow our approach and look at single-digit round picks, or running backs selected between Picks 61 and 108. That represents the start of Round 6 and the end of Round 9 in a 12-team league.

That may not be all that big of a deal, to be fair. After all, a player is going to have an easier time exceeding ADP expectation late than he will in the middle rounds, since a middle-round running back has higher starting expectations.

What's interesting here, though, is the difference between the hit rates of team RB1s versus team not RB1s in Rounds 6 through 9. Over the last 10 seasons, team RB1s who've been drafted in the middle rounds have been twice as likely to exceed expectation by 100-plus points versus their counterparts.

To some, this may seem pretty obvious. If a running back is being selected as an RB2 or worse in the middle rounds, that means he's being drafted behind a backfield mate who was likely selected fairly early. And if that player was selected early, then that player is probably good at the game. That makes it harder for the RB2 to really thrive.

It's clear that you want to target team RB1s in the middle rounds of your draft, but not all team RB1s are alike.

Some team RB1s are being selected fairly close to their backfield teammates. Other team RB1s are sitting all alone in those middle rounds, watching their teammates get selected in Rounds 14, 15, and 16.

There's a pretty big difference between those two scenarios. In the first case, drafters are essentially saying that they think the backfield is an attractive one, but they don't know which running back to draft. We're seeing that this year with the 49ers.

In the second case, managers are saying that the situation probably isn't all that attractive. If it was attractive, the RB1 wouldn't be selected so late without any teammates being taken near him. Like the Jets backfield here in 2021.

Is there a type of RB1 we should prefer?

Yes. And this is where I'd like to introduce The Ambiguous RB1 Theory.

The Ambiguous RB1 Theory states that when you're looking for ambiguous backfields to target, you should be attacking middle-round team RB1s who have teammates who are also being selected in the middle rounds.

To the math we go.

As you saw above, we've had eight running backs selected in Rounds 6 through 9 since 2011 who were also their team's top running back taken by ADP. Of those eight, four breakouts happened to running backs who didn't have a teammate drafted in that range with them. The other four, obviously, came from team RB1s who had a teammate selected near them.

The difference between those two subsets is that one has a denominator of 64, while the other has one of 17.

In other words, team RB1s who have teammates selected close to them in the middle rounds have historically been pretty dominant.

So...why? Why is this happening? Why are team RB1s in the middle rounds who are being drafted just barely ahead of their running back teammates hitting at such a substantially higher rate?

Well, first off, there could be some variance involved here. The sample size isn't massive, so we can't assume this is everything.

It does seem logical, though.

Expectations aren't super high for middle-round picks. There's some reason players are being drafted there in the first place.

For these team RB1s who have teammates selected near them, that reason likely isn't team situation-based. If two running backs from the same team are being selected in the middle rounds, that at least tells us that the backfield has potential. It tells us that fantasy managers are really trying to grab a piece of the backfield because there's opportunity there.

It's just that, in a lot of cases, the two running backs who are being selected likely have some sort of talent. Or they do something that we perceive the other back can't do, which drives their prices closer together.

But a running back from that backfield can still emerge. And when he does, he's probably in a positive situation that'll allow him to thrive in fantasy football.

Now, this approach is clearly dependent upon ADP source. The data collected for this study was from My Fantasy League redrafts that occurred in August over the last decade. As we know, average draft position isn't static -- we see movement all the time.

If nothing else, The Ambiguous RB1 Theory is telling us that we're not as bad as we might think at spotting a backfield's top running back. Instead of just assuming you'll grab the "cheaper of the two" running backs in a backfield, maybe you'll want to think twice in the future.