3 Horse Racing Bets to Target at Churchill Downs and Gulfstream Park on Saturday, 5/28/22

How to Find Breakout Running Backs in Fantasy Football

JJ Zachariason  —  @LateRoundQB Jun 2nd, 2020
Share on Facebook Share on Twitter
What should you be looking for when trying to find running back values in the middle and late rounds of your fantasy football draft?

We need super values. We need Austin Ekeler from 2019 or Alvin Kamara from 2017.

Finding and drafting those players is no easy task. It's not like they grow on trees. But is there a way to increase our probability of hitting on one of them during our draft? Are there shared traits among players who end up dramatically exceeding their average draft position?

In order to find the traits that these breakout running backs share, we need to define who the breakout players are in the first place.

So let's get nerdy. 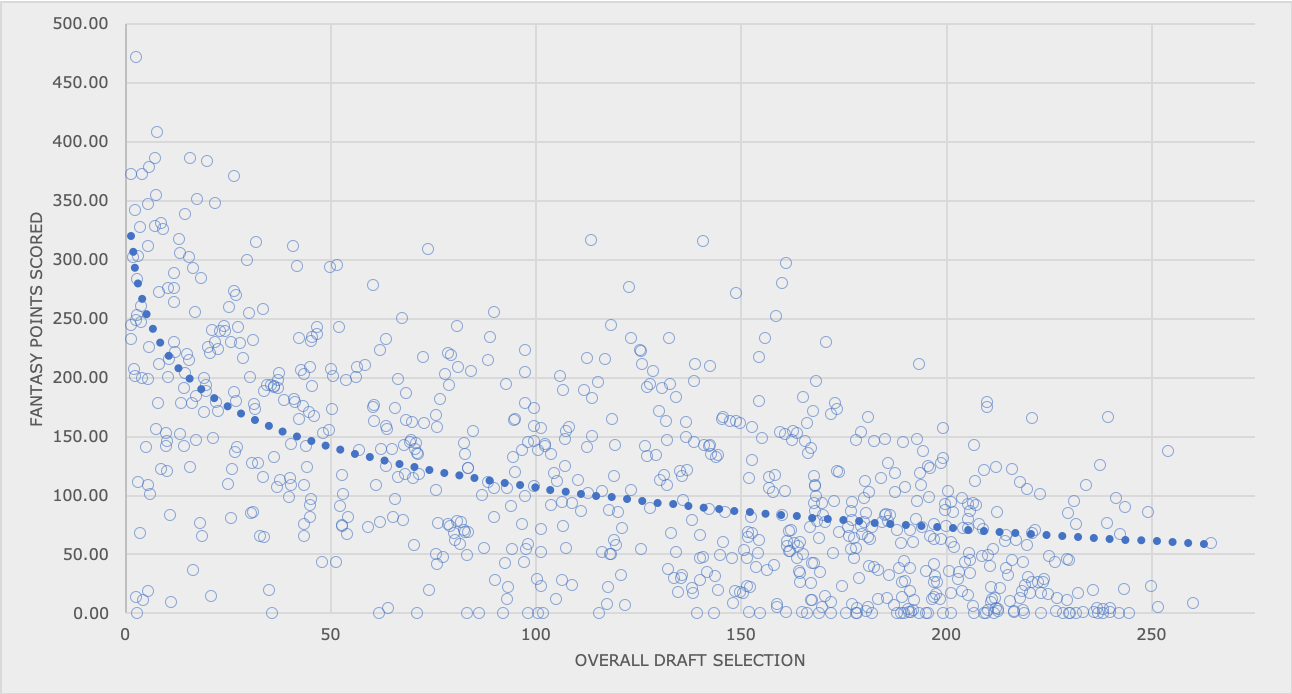 The trendline shown in the chart represents expectation. A running back picked 50th overall, for example, would be expected to score close to 150 points given how running backs have scored at that ADP over the last nine years. In turn, any data point above the trendline is a running back who outperformed that expectation. Below it is the opposite.

Using that information, we can find which running backs outperformed expectation most across the last nine seasons.

The 10 running back seasons listed above have been the 10-most valuable running back campaigns in fantasy football since 2011. (Or, at least, they're close to it -- other methods may show slightly different results.)

The thing is, when we're talking "breakout players," we're typically not referring to early-round picks. Was Christian McCaffrey a breakout player last year? Of course not -- his average draft position was at the beginning of drafts. He just had a unicorn season where he exceeded expectation in an insane way.

With breakout players, we're more concerned with the middle and late rounds of drafts. Since the opportunity cost in fantasy drafts becomes far less significant after Round 5 -- and you can read about that here -- then that's where we should be focused on setting our parameters.

When we limit things to looking at post-Round 5 (top-60) picks, we get slightly different results.

These are the later-round running backs who've given you the best value in fantasy drafts over the last nine seasons. Each of these players exceeded expectation by nearly 150 points.

A sample size of 10 isn't very large, so let's expand things a bit. Instead of looking at the top-10 running backs who have outperformed their average draft position most, let's examine all running backs drafted after Round 5 who outperformed ADP by 100 or more points.

That breakout running back sample can tell us a lot.

Looking at the 39 running backs in our sample, one thing is clear: the running backs who are breaking out haven't typically been handcuffs.

Now, the term "handcuff" is a subjective one. At a high level, handcuffing running backs is the practice of taking a high-end running back's backup in order to ensure production if that running back goes down with an injury. So if you're drafting, say, Ezekiel Elliott, then you may want to consider drafting Tony Pollard, too.

If these breakout players were true handcuffs, they'd have a teammate selected high in a typical fantasy draft. But that's not the case. Instead, of these 39 running backs, the average pick for the top running back in their backfield has been Pick 59. That's at the end of the fifth round.

Intuitively, Trend 1 tells us that breakout running backs are coming from hard-to-read backfields. If the average top running back from these breakout backfields is being drafted at Pick 59, that means we don't have a lot of confidence in how the backfield is going to shake out. Historically, Pick 59 has been the range where we see low-end RB2s fall off draft boards.

This all pushes forward the idea that breakout running backs are coming from ambiguous backfields. The teammates in front of them aren't very good -- they have fairly low average draft positions -- but they're still in front of them. It gives love to the notion that taking the cheaper player in a committee isn't a bad call.

In order for a running back to produce in fantasy football -- especially in PPR formats -- he's likely going to have to catch passes. So, yeah, maybe this trend is obvious.

What's not so obvious is just how heavily breakout running backs rely on the passing game.

Those numbers may not mean a whole lot to you at face value. Giving them context provides that meaning, though.

The RB1-10 group consists of all top-10 running backs in a given season since 2011, minus the players from the breakout group. The same method was used for the RB11-20 and RB1-20 groups as well.

Notice anything interesting? To me, it's glaring: running backs who break out in the late rounds have a disproportionate rush share to target share ratio. A higher percentage of their touches are coming through the air versus on the ground.

You can see this when looking at their raw numbers as well:

Over the last nine seasons, top-10 running backs -- ones that don't include players from our breakout group -- have averaged about 3.6 times as many rush attempts versus targets. That number's even higher among the next set of running backs.

Meanwhile, our breakout sample is substantially lower. They're seeing a larger proportion of their touches come through the air.

This could mean a whole lot of different things. One is that we, as a fantasy football community, don't put enough emphasis on the impact a target has for running backs in fantasy football. We know targets are way more important than rushes, but perhaps average draft position doesn't capture that difference enough.

It could also be the result of the unpredictability of targets. There's a chance that fantasy managers are just bad at projecting target distribution, which leads to usable pass-catching backs later in drafts.

Whatever the case, it's very clear that a higher percentage of breakout running back touches are coming through the air versus the ground.

Trend 4: Breakout Running Backs Are of All Ages

This isn't the first time this study has been done. A little over two years ago, I wrote about this same topic. Back then, Trends 1 through 3 were the same. There's stronger evidence these days, but the overall ideas are the same.

Trend 4 -- the final one -- is different. A couple of years back, Trend 4 was that breakout running backs tend to come from good offenses. While that's generally true, the correlation isn't strong enough at this point to call it out specifically.

Instead, let's talk about age.

Hearing the word "breakout" may force us to think about younger players. They're breaking out. They're becoming something bigger than they were before.

And the truth is, breakout running backs -- how we're defining them -- aren't strictly young.

Of our sample of 39 running backs, 7 of them broke out during their rookie season. We had another six during their second season, and seven during their third.

The data likely skews young, but so does the running back position in general. We can probably use age as a tiebreaker, but it shouldn't be put on the same level as the other trends. Plenty of older running backs like Dion Lewis, DeAngelo Williams, Danny Woodhead, and Fred Jackson have had valuable seasons over the last decade. Don't ignore them.

This isn't about giving you the answers to the draft-day test. I could sit back, recline in my incredibly comfortable office chair, and write about five later-round running backs to target in your fantasy football drafts.

But that wouldn't be very fun, would it?

This is about a process. A process that you can take to your draft to find running backs who you think could break out. Who you see fitting the criteria above.

But, uh, if you're curious who I like in the middle and late rounds of drafts this year, subscribe to The Late-Round Podcast. I'll be talking about it on Monday's show.