NBA Betting Guide for Wednesday 1/26/22: The Jazz Can Still Play Despite Their Injuries

Fantasy Football: Which Teams Are Bound to Regress in 2020?

The fantasy football community has gotten a lot better at spotting player-level regression.

Ryan Tannehill's a perfect example. After becoming starter last season, Tannehill was the third-best quarterback option in fantasy football from a points-per-game standpoint. He was lighting it up.

Today -- just months removed from his comeback season -- Tannehill's getting scooped up in best ball drafts as the QB19.

Regardless of my feelings on Tannehill (he's undervalued!), the obvious reason that we're not seeing him valued as a top-10 quarterback option is because the market doesn't believe in him. This isn't just due to the fact that his breakout season happened late in his career, either. It's because of things like touchdown rate, where Tannehill far outperformed expectation. It's because it'll be really hard for Tannehill to maintain a 9.6 yards per attempt rate year over year.

Like I said, the fantasy football community has gotten a lot better at spotting player-level regression.

But what about the team level?

We know situation matters, and we know how a team performs can often skew the results of an individual player. We also know is that the NFL is fickle. What happens one year doesn't automatically happen the next.

So why not put more of an emphasis on looking at what was or wasn't sustainable at the team level, too?

There are two main areas to analyze when spotting team-level regression: touchdowns and play-calling tendencies.

By touchdowns, I'm referring to...well, I'm talking about touchdowns. We know what a touchdown is. What you may not know, though, is how difficult it is for a team to maintain a high (or low) touchdown total year over year.

The scatterplot above shows the amount of offensive touchdowns scored by every team since 2011 (x-axis) versus the number of touchdowns that team gained or loss the follow season (y-axis). There's a decent correlation here (0.37 r-squared) -- at least in football terms -- that tells us that when a team scores a lot of touchdowns one year, they're likely to score fewer the next. And then the opposite is true, too.

This isn't the most surprising thing in the world. A team that runs hot and scores a boatload of touchdowns in a season isn't likely to keep up that pace the following year. They can still be good, they just likely won't be as good.

You can look at touchdown regression another way, too, and that's by analyzing how a team scores touchdowns. 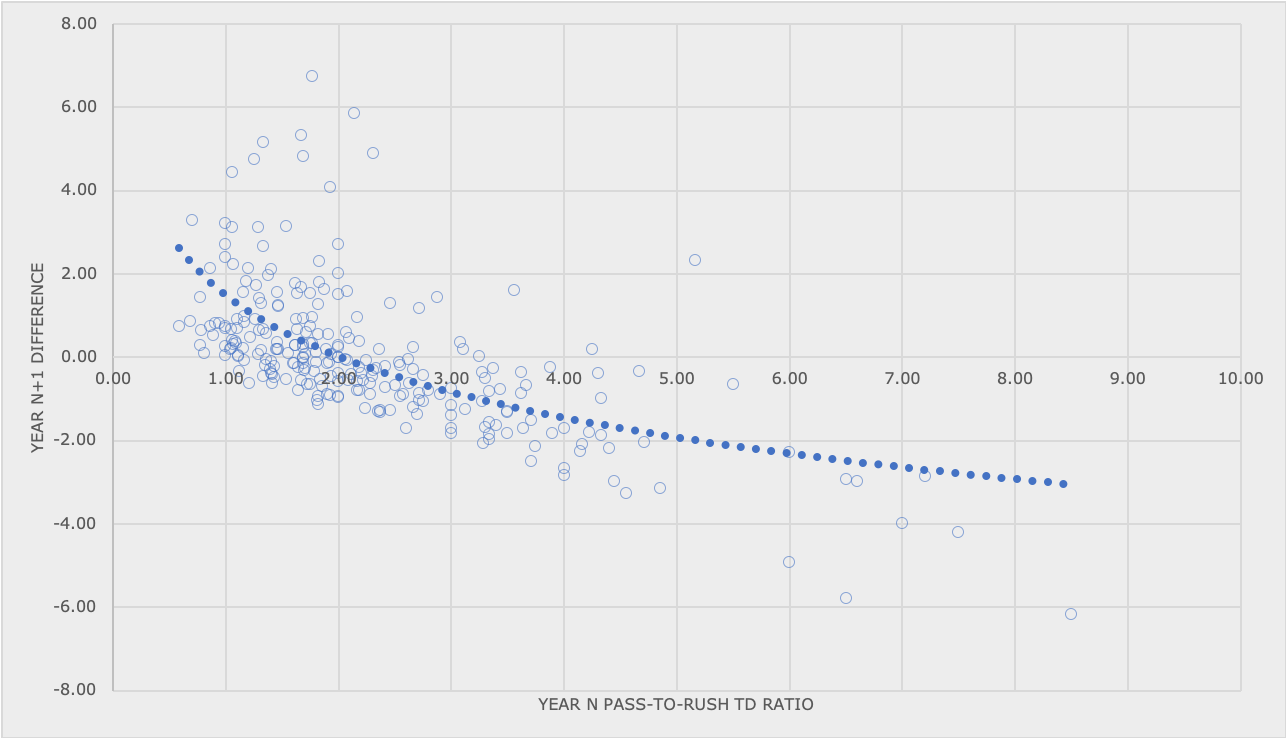 Over the last nine NFL seasons, the league has seen a pass-to-rush touchdown ratio of 1.94. In other words, we've seen almost two times as many passing touchdowns compared to rushing touchdowns.

The graph above shows you what happens when a team goes over or under that mark in a given season. The x-axis represents the pass-to-rush touchdown ratio in one year, while the y-axis shows us how that ratio changed the following year. Teams that are well above the 1.94 mark tend to see a decline the next season, while teams below 1.94 usually see an increase.

As for play-calling tendencies, all it takes is a little pass-to-rush attempt ratio analysis. 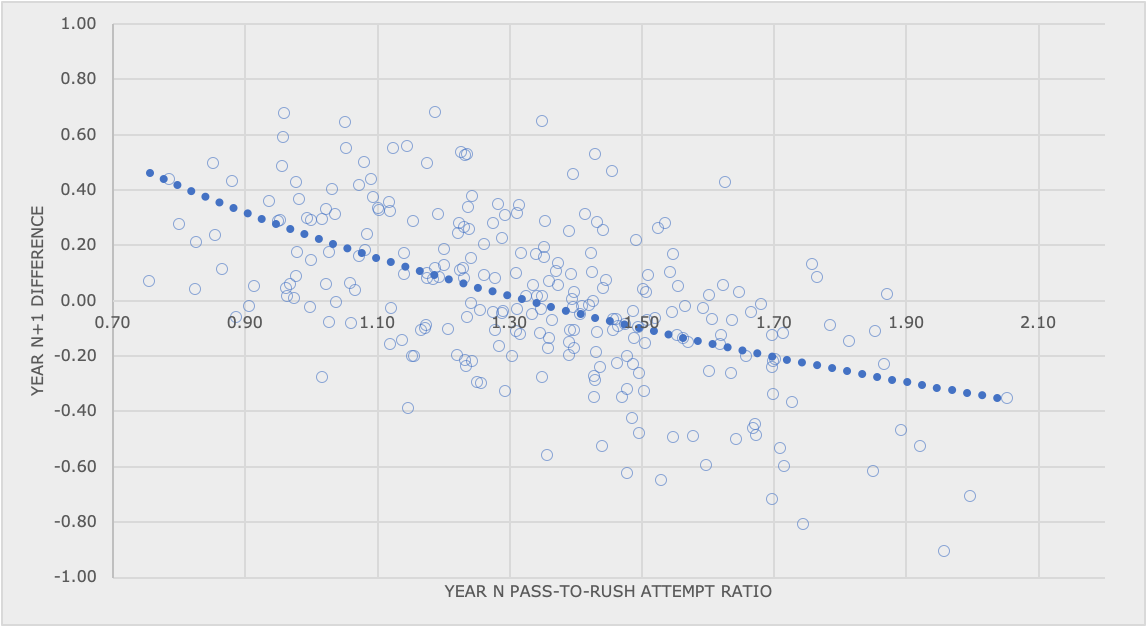 When a team is pass-heavy in the current year (x-axis), we typically see them drop in pass-to-rush ratio the following season (y-axis). A big reason for this is game script-related. Good teams are typically more run-heavy than bad teams are. It's not because rushing is superior to passing. It's due to the fact that good teams are leading more often in games, and when teams are ahead, they run the ball more to kill clock.

Thanks to the unpredictable nature of the NFL, teams don't have super consistent pass-to-rush ratios year over year. It's not very sticky. In fact, how a team calls plays in a neutral game script -- when games are close -- is much more predictive for next-season overall pass-to-rush ratio than a team's overall ratio is.

Like the touchdown data above, this is a key way to spot extreme, obvious regression.

Which teams should we be watching in 2020, then?

Jacksonville Jaguars
Remember when Leonard Fournette couldn't find the end zone last year? Well, the Jacksonville passing attack benefitted from that unfortunate variance, throwing eight times as many passing touchdowns as they had rushing touchdowns (24 to 3). Since 2011, only one team -- Seattle in 2017 -- has had that high of a ratio in a single season. The following year, the Seahawks watched their passing-to-rushing touchdown ratio fall from 8.50 to 2.33. When you extend that sample to looking at the 10 teams who had a ratio north of 5.50, each one saw their ratio fall the following season with an average dip of 3.68.

Baltimore Ravens
The Ravens led the NFL in touchdowns last year with 58, putting them in "unrepeatable" territory. Of the seven teams to hit that mark in a single season since 2011, none of them were able to increase that total the following year, with the average touchdowns scored among those teams at about 47. Extending that further, we've seen 25 different teams with 50 or more offensive touchdowns over this same time period, and 23 of the 25 watched their touchdown total dip year over year.


New York Jets
On the opposite end of the spectrum, you've got the Jets. They scored just 25 offensive touchdowns last year, which is something done by just 19 other teams between 2011 and 2018. Of those teams, only two saw a decrease in offensive touchdowns the following year. And given historical trends, we should expect the Jets -- as long as they're healthy -- to score more than 30 touchdowns in 2020.

Carolina Panthers
No team had a lower pass-to-rush touchdown ratio last year than the Carolina Panthers. That probably benefited Christian McCaffrey a bit, but the expectation should be that the Panthers throw for more touchdowns than they run for this season -- of the 12 teams with a passing-to-touchdown ratio below 1.00 since 2011, each saw an increase in ratio the following season. And only one kept that ratio below 1.00.

Atlanta Falcons
The Falcons should be a pass-heavy team once again in 2020. Dirk Koetter's been the team's offensive coordinator for four seasons, and in those seasons, the Falcons have ranked fourth, second, first, and first in neutral script pass-to-rush ratio. So even when game script isn't an issue, they're still throwing the ball a lot. But -- but! -- do keep in mind that their 1.89 pass-to-rush attempt ratio last year was tops in the league, and teams hitting even close to that mark almost always see that value fall the following season.

Baltimore Ravens
Last year's Ravens ran just 21.6% of their offensive plays while trailing, by far the lowest rate in the league. That combined with their run-first mentality gave them the lowest pass-to-rush attempt ratio that we've seen across this nine-year sample. And it's going to be hard to repeat it. Of the 10 teams with a pass-to-rush ratio at or below 0.90 since 2011, all ended up being more pass-heavy the following year, with an average increase of 0.22. The Ravens are still going to be a run-friendly team, but it's not likely we see them rush the rock like they did in 2019.

San Francisco 49ers
Similar to Baltimore, San Francisco benefited from positive game scripts last season, lowering their passing totals. They weren't as run-heavy as the Ravens were, but the 49ers did finish the season with more rush attempts than pass attempts, which had only happened 27 times between 2011 and 2018. Only one of those 27 teams ended up seeing their pass-to-rush ratio decrease the following season.

Minnesota Vikings
Kevin Stefanski ran a run-friendly offense last year in Minnesota, but what's different about the Vikings compared to the Ravens and 49ers is that, when games were close, Minnesota was throwing passes at a much higher rate. Overall, Minnesota's ratio was close to San Francisco's (0.98 versus 0.96). But the Vikings ranked 23rd in neutral script pass-to-rush ratio, while San Francisco was 29th. It wouldn't be shocking at all to see them lean toward the pass more in 2020.