Running backs are viewed as prized possessions in the landscape of fantasy football, and they should be considering the power the position holds.

The backfield of the Detroit Lions is a unit that poses some questions as well as remarkable talent, containing both veteran running back Kerryon Johnson and rookie D'Andre Swift, the electric second-round rookie draft pick (35th overall) out of Georgia.

Evaluating the Lions' backfield properly could give you the upper hand in your fantasy league. Here's why.

The Return of Stafford

The 2019 NFL season did not go as planned for the Detroit Lions. An upper thoracic spine injury limited starting quarterback Matthew Stafford to only eight games. In those eight games, the Lions registered a 3-4-1 record and averaged 25.5 points per game. The remaining games -- which were quarterbacked by undrafted free agents David Blough and Jeff Driskel -- resulted in an 0-8 record and 17.2 points per game.

Injuries seemed to be somewhat of a theme for the Lions, and Kerryon Johnson only registered eight games of playing time after being placed on injured reserve due to a knee surgery. Johnson totaled 113 rushing attempts for 403 rushing yards and 3 rushing touchdowns, in addition to 10 receptions on 15 targets for 127 receiving yards and a receiving touchdown.

Overall, 2019 proved to be a struggle for Johnson as his statistics were subpar across the board:

Johnson only averaged 4.3 yards per touch (down from 5.7 in 2018) and registered a 62.1% opportunity share (the percentage of total team running back carries plus targets) in the Lions’ backfield, ranking 19th in the league. All of this amounted to 10.6 fantasy points per game in full-point PPR leagues, a figure which ranked just 33rd among NFL running backs.


He faced an average of 6.8 defenders in the box, which ranked 16th in the league, per Player Profiler. Not surprisingly, he was far less effective when the box was stacked against him:

The good news is that Stafford was quietly putting together one of the best seasons of his career before getting injured, and a full season with Stafford could lift this whole offense. He averaged 8.6 yards per pass attempt, a number which took an absolute nosedive with Blough (5.7) and Driskel (6.5) under center.

If Stafford can play at a high level again in 2020, that will force opposing defenses to skew towards defending the pass, potentially opening the door for Johnson and Swift in the running game.

The line situation was bad last year, but it should be improved in 2020.

Detroit's line struggled mightily in 2019, ranking 20th in adjusted line yards per Football Outsiders. Even if we take a look at raw statistics, the rushing attack struggled as a whole, averaging only 103.1 rushing yards per game (21st) and 4.1 yards per carry (22nd).

Detroit ranked 24th in Adjusted Rushing NEP per play, as well, numberFire's metric for evaluating a rushing offense when adjusted for schedule.

Detroit was among the worst teams in the league at rushing success behind their right tackle, as evidenced by these charts from Warren Sharp’s Sharp Football Stats: 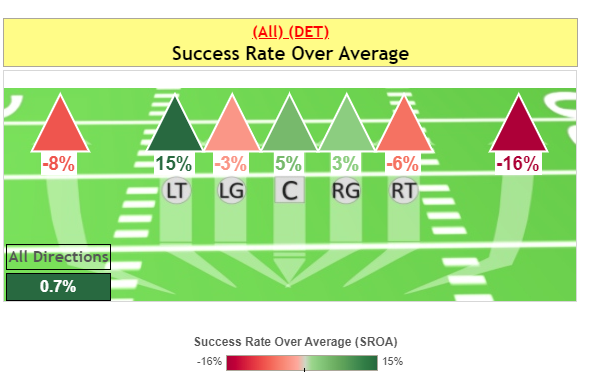 The Lions were least productive when running behind right tackle Ricky Wagner, as well as his counterparts, when compared to runs designed in other directions. The lack of production on runs following Wagner (12 games played) likely had a lot to do with his release in the offseason and led to the Lions handing Vaitai a five-year, $50 million contract.

The additions ultimately may not result in a majorly upgraded unit, but it at least suggests the Lions were aware of their offensive line issue and were willing to put forth some resources to attempt to fix it.

With the return of Stafford and an improved offensive line, the needle is pointing up for this Detroit running game. But which back will be the primary beneficiary?

The main issue with Johnson stems from his lack of health. In his two NFL seasons, Johnson has registered only 10 and 8 games played, totaling a possible 18 out of 32 games.

The actions by general manager Bob Quinn suggest the Lions have a lack of trust in Johnson’s ability to either stay healthy or produce consistently, as they’ve made it a point to address the running back position in back-to-back offseasons.

They signed C.J. Anderson to a one-year $1.5 million contract, offered Malcolm Brown a two-year $3.25 million offer sheet (only to have the Los Angeles Rams match it), and then just recently selected Swift with the 35th overall pick in the 2020 NFL Draft.


How the Lions plan to use the electric Swift is not yet known, though teams do not typically spend premium draft picks on running backs that aren’t prepared to contribute right out of the gate.

Swift was viewed as one of the best running backs in college football, compiling 1,218 rushing yards, 216 receiving yards, and 8 combined touchdowns in 2019. Swift also averaged 6.6 yards per carry over the course of his three-year career and registered 73 receptions and 3,551 yards from scrimmage.

Swift is clearly a more accomplished running back than Johnson was coming out of college and has proven to be a durable option -- something Johnson has yet to do.

If head coach Matt Patricia is true to his word that he'll use whichever back is right in a particular situation, then the two are very likely to handle some sort of a timeshare at the running back position. But the one thing you can count on is the pass-game upside from Swift, as he is no stranger to seeing targets (over 30 in his last two collegiate seasons).

It's worth noting that Johnson ranks well on a per-target basis in Reception NEP (he ranks 7th among 35 backs with 35 to 75 targets the past two years), but Swift's receiving ability is on another level and should widen the gap between the two.

Swift has the potential to separate himself immediately as the pass-game option for a healthy Stafford, ultimately grabbing a stranglehold on the totality of running back snaps available. Early projections show a pretty even split, but if Swift reaches his year one potential and/or Johnson struggles to stay healthy, then a 65-35% work share among the two – with Swift leading the way – could be a fair projection.

Some may expect an even timeshare between Swift and Johnson, as their current average draft positions (ADP) suggest.

It should come as no surprise that Swift is regularly selected earlier than Johnson in most leagues, likely due to his durability, high draft selection, and the excitement over an explosive rookie transitioning into the big leagues.

Our projections have Swift scoring 116.5 fantasy points in 2020 and Johnson scoring 137.1 points. In terms of workloads, numberFire projects Johnson for 178 carries and 40 targets with Swift slated for 162 and 35, respectively. It certainly would not be a surprise to see those projections flip based on the draft equity spent on Swift and durability gap between the two runners. If Johnson were to miss time, Swift would become a primary back.

When looking at the backfield situation of the Lions, Swift separates himself for multiple reasons. Johnson has yet to prove he can stay healthy at any point in his career, and that should worry you as a fantasy player. Next is the passing game upside between the two players -- another facet in which Swift has the clear advantage. Then, when you compare the two as runners, both are quality options, though Swift stands out as a potentially elite NFL running back due to his explosiveness, open-field ability, and dangerous one-cut style.

Comparing the potential workload between the two runners is a tough thing to predict, though the needle sways towards Swift’s upside, even at a greater cost.