Cole Kmet Fills a Need for the Chicago Bears

It was a wild pre-draft season -- wilder than normal, it felt -- and it was one with very few certainties outside of Joe Burrow being a lock to go first overall.

One of the other rare exceptions was Cole Kmet, who went wire-to-wire in the draft buildup as the top player at the tight end position, with his stock seemingly rising throughout. He ended up going to the Chicago Bears early in Round 2.

What kind of prospect is Kmet, and what should we expect from him in fantasy football?

Kmet showed out at the combine, testing extremely well and cementing his status as an early pick. 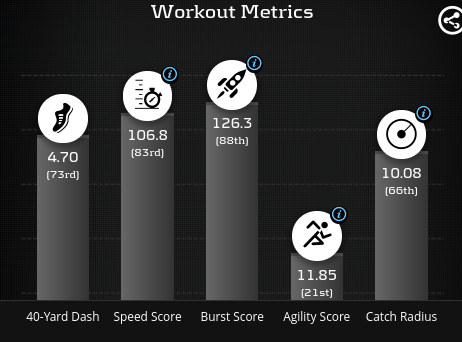 Give his size (6-foot-4, 262 pounds), Kmet's 4.70 40-yard dash is impressive, which is reflected in his 83rd percentile speed score, per PlayerProfiler. And his burst score is drool-worthy.

Where things get dicey for Kmet is when we dig into his college production. With the caveat that college numbers for tight ends can be wonky due to how they're used at the college level, Kmet's final-season yards-per-grab mark of 12.0 ranks in just the 35th percentile, and his college dominator rating of 20.8% sits is in just the 66th percentile.

Again, this doesn't matter as much as it does for receivers and running backs because of how little tight ends are used in the passing game in college. I mean, to use one example, George Kittle had 290 and 314 yards, respectively, over his final two college seasons. Ideally, we'd see better college production from Kmet, though, and it likely means that landing spot matters a lot for him.

A Fantasy Asset for the Future

Rookie tight ends don't do much -- we all know that. So we shouldn't expect Kmet to make much of a redraft impact in 2020, and that's especially true with Kmet going to a Chicago Bears passing attack that's one of the worst in the league.

The whole rookie-tight-end thing coupled with the tight end position maybe not being the flaming dumpster fire in 2020 that it has been for much of the last few years will likely make it difficult for Kmet to be anything other than a desperation streamer in redraft formats in 2020 unless he really hits the ground running.

In dynasty, though, Kmet is easily the TE1 in this class as things stand. Given the insane depth this rookie class has at running back and receiver, however, I don't see Kmet breaking into the first or second round of standard-league rookie drafts. But he's a solid third-round option and has the chance to be an impact fantasy player as soon as 2021. Just don't expect much in 2020.