With free agency going and the NFL Draft not too far away, the level of activity in your dynasty leagues should be ramping back up.

I find this window -- between free agency and the draft -- a great time to trade. Unless you're lucky enough to be in a league that's active year-round, your leaguemates are likely to be more interested in the NFL right now than they were a month ago, something that's particularly true at the moment with the sports world on pause. And with free agency shaking up situations around the league, the market can be pretty fluid and unpredictable.

We've already covered wideouts and running backs in this position-by-position series that hits on players I'm buying at each of the fantasy-relevant positions. Let's take a look at three tight ends who make for good buys right now.

Ian Thomas' stock has gotten a boost this offseason in two big ways.

The first of which is Greg Olsen signing with the Seattle Seahawks, opening the door for Thomas to be the Carolina Panthers' number-one tight end.

Heading into Year 3, Thomas has been mostly a backup thus far in his career, but he's gotten some spot starts over the past two seasons when Olsen has been on the shelf, most of them coming in 2018. That season, Olsen missed seven total games, including the final four, and over those last four outings, Thomas -- then a rookie -- totaled 200 yards and two scores (50 yards and 0.5 touchdowns per game). Last year, Olsen missed two games, and Thomas combined for 80 yards and a score over the two weeks.

The other boost for Thomas is that the Panthers will no longer have Kyle Allen at the controls. The signing of Teddy Bridgewater is an upgrade over Allen and should steady this offense.

In addition to a likely boost in volume barring Carolina drafting a tight end, Thomas is also a pretty darn good athlete, testing out well, according to PlayerProfiler. 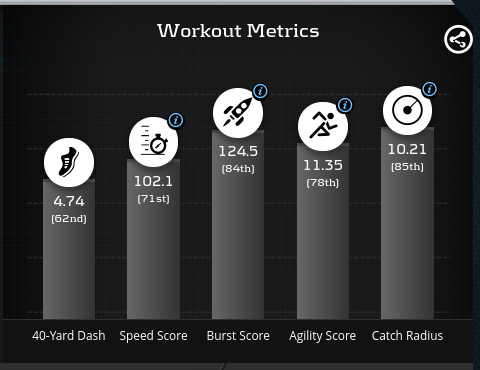 Tight end has more intriguing late-round options than usual heading into 2020, and Thomas is one of them. While Thomas' ADP will probably rise a bit after the market adjusts for Olsen's departure, he's one of my favorite buys across all positions this offseason.

Chris Herndon has been on buy-low lists before as he was a trendy target 12 months ago. But after playing in just one game in 2019, he's slipped through the cracks a bit, even though much of what made him appealing a year ago -- what had him nearly 50 spots more expensive in ADP last March -- still applies today.

Most notably -- he's a capable pass catcher on a New York Jets team that doesn't have many of them.

A fourth-round pick in 2018, Herndon had a respectable rookie season, going for 502 yards and four touchdowns on 39 catches. And while 2019 was a lost campaign, it did show us what even a halfway decent tight end could do in this offense as Ryan Griffin produced high-end TE2/back-end TE1 numbers for a chunk of time in the middle of the season.

Going by reports this offseason, Herndon is going to be the Jets' top tight end, with beat writer Connor Hughes writing, "To say the Jets can’t wait to get Chris Herndon back in their lineup is a vast understatement."

Herndon has a chance to put up TE1 (top-12) numbers in 2020 on a Jets team that desperately needs playmakers, even more so after losing Robby Anderson in free agency. This is the window to buy him.

Similar to Thomas' situation, Blake Jarwin should be stepping into a starting gig with the departure of a veteran as Jason Witten has left for the Las Vegas Raiders, with Jarwin signing a new contract this offseason, ostensibly cementing him as the Dallas Cowboys' top tight end.

Going into his age-26 campaign, Jarwin has totaled 77 targets and 58 receptions over the last two years, going for 672 yards and six scores. He's flashed big-play chops with an average of 11.6 yards per catch in that time, something he did in college, too, with 16.3 yards per grab his final season at Oklahoma State, which ranks in the 88th percentile, per PlayerProfiler.

Likely to be on the field a lot more after playing just 38.7% of the snaps a season ago, Jarwin could push for high-end TE2/low-end TE1 production in 2020 in a Dallas offense that needs pass-game weapons alongside Amari Cooper and Michael Gallup, and he should be pretty cheap to acquire as he's barely inside the top 200 players right now, though the current ADP doesn't account for Witten being out of the picture.