Thursday Night Football: Can the Titans Stay Alive in the AFC Playoff Hunt?

Matt Kupferle  —  @MKupferle Dec 6th, 2018
Share on Facebook Share on Twitter
One game out of an AFC Wild Card berth, Tennessee needs a win to improve their postseason chances. Can Jacksonville play spoiler against their divisional rival?

This was not how the 2018 season was supposed to go for the Jacksonville Jaguars (4-8) or the Tennessee Titans (6-6). The Jaguars made the conference championship a year ago while the Titans were expected to take a step forward behind the progression of Marcus Mariota. But both teams have struggled to keep pace with the Houston Texans, who lead the division with a 9-3 record, and the clock is ticking with only four games left.

Per our power rankings, both of these teams rank towards the bottom of the barrel, with the Jags ranking 20th and the Titans sliding in one spot behind them at 21st.

So, who will come out on top? Let's dig in and find out.

With two quarterbacks struggling at the helm of their respective offenses, this could be a bit of an offensive eyesore tonight.

Mariota hasn't been at his best this season. In peeping Passing Net Expected Points (NEP) per drop back, among the 34 quarterbacks with 150 or more drop backs, Mariota clocks in only 23rd (0.07). In terms of Passing Success Rate, or the percentage of drop backs resulting in positive NEP, Mariota ranks slightly better (20th) with a mark of 46.79%.

With quarterback Blake Bortles recently benched, Cody Kessler took over the reigns in hopes of sparking the offense, but last week was a bit rough to watch, with only six points for Jacksonville, albeit in a win. In 54 total drop backs this year, spanning work in Weeks 7 and 13, Kessler has posted a Passing NEP per drop back mark of -0.02. While limited to a bit of a game manager role last week, Kessler was slightly better with a mark of 0.08 NEP per drop back.

Both signal-callers seem have been pretty average in pushing the ball downfield. In terms of Average Intended Air Yards (IAY), which measures the average air yards a passer throws on all attempts, Mariota has posted a mark of only 7.8 IAY, and last week, Kessler attempted only three passes beyond eight yards. 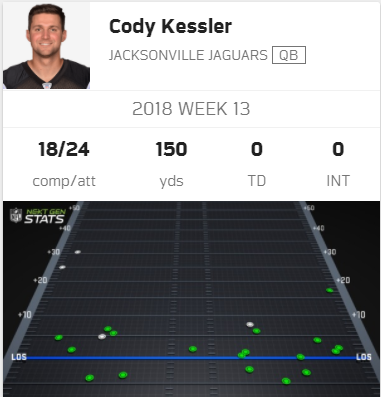 In terms of situation-neutral pace, these are two of the slowest-moving teams in the NFL. The Jags check in slightly higher at 22nd (31.73 seconds per play), while Tennessee ranks 25th (32.19). Don't expect a high-flying shootout in this contest.

With neither team having a pronounced quarterbacking advantage, does anyone have a decided edge at the running back spot?

Last Thursday featured two dynamic rushing attacks that have done some major work on the ground this year. This week? Not so much.

Among the 49 running backs with 75 or more carries in 2018, the most effective runner in this game, at least in terms of Rushing NEP per rush, is Leonard Fournette, who returns to the field after a one game suspension. However, posting a mark of 0.00 and ranking 25th isn't exactly setting the world on fire. For the Titans attack, the split backfield of Dion Lewis (-0.20) and Derrick Henry (-0.02) isn't a powerful duo, either. For the first time in several weeks, Henry out-touched Lewis by a mark of 12 to 8, so the inefficient Lewis may be starting to see a decline in workload.

With two rushing attacks struggling to get going, how do these defenses stack up?

In looking at numberFire's schedule-adjusted metrics, Jacksonville holds a decided edge between the two defenses, ranking 8th, while Tennessee clocks in only 20th.

Similar to last season, passing against Jacksonville has been pretty tough -- they rank 4th in passing defense, while still landing a solid 10th against the run. Tennessee, meanwhile, hasn't been as adept -- they check in 24th against the pass and 22nd against the run.

Both teams have been pretty mediocre in bringing heat to the quarterback. In terms of Football Outsiders' adjusted sack rate, which measures sacks plus intentional grounding penalties, Tennessee ranks 17th with a mark of 7.0%, while Jacksonville has been a bit worse at only 23rd (6.5%). That's a far cry from Sacksonville's second-best mark a year ago (9.1%), although they did pound Andrew Luck and a very solid Indianapolis Colts offensive line for three sacks last week.

Both teams have been solid in limiting yards allowed per drive, as Jacksonville ranks 5th (29.12), while Tennessee ranks 14th (31.59).

Neither team is great in forcing a pile of turnovers, which could help these struggling offensive units. Jacksonville has forced 13 turnovers (9 interceptions), while Tennessee has forced 10 (7 interceptions) -- which ranks those two teams 21st and 29th, respectively.