There are many ways to describe former Louisville Cardinals quarterback Lamar Jackson's game: thrilling, mind-boggling, awe-inspiring. The highlight reel that this dual-threat superstar put together in college is longer than the directorâ€™s cuts of the entire Lord of the Rings and The Hobbit franchises combined.

I thought it was impossible to declare the prospect value of the one-time Heisman Trophy winner â€œpolarizing.â€ And, yet, here we are.

Jackson is a phenomenal college football player who seemingly has many people in the NFL concerned that he wonâ€™t make the transition to the pros. Others are convinced his tools and production are the foundation for a star in the making.

Awards aside, Jackson has already proven quite a bit on the gridiron in college.

Despite Louisville not being one of the traditional powerhouses of college football, Jacksonâ€™s pass-and-run combo made him dangerous for opposing defenses. Over the course of his career, Jackson totaled 9,043 passing yards on 1,086 attempts (8.3 yards per attempt), with 69 touchdowns to 27 interceptions. On the ground, though, he racked up 4,132 yards and 50 touchdowns on 655 rushes.

In fact, Jackson ranks fifth among all players since 2000 in career NCAA touchdowns (passing, rushing, receiving combined), and third among quarterbacks, per Sports Reference.

The charts below show Jacksonâ€™s career trajectories in passing categories: completion rate and both touchdown and interception rate. Has he improved through the years? 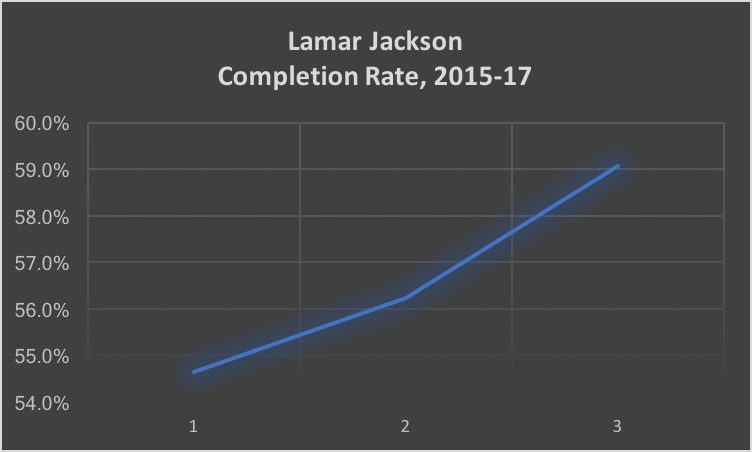 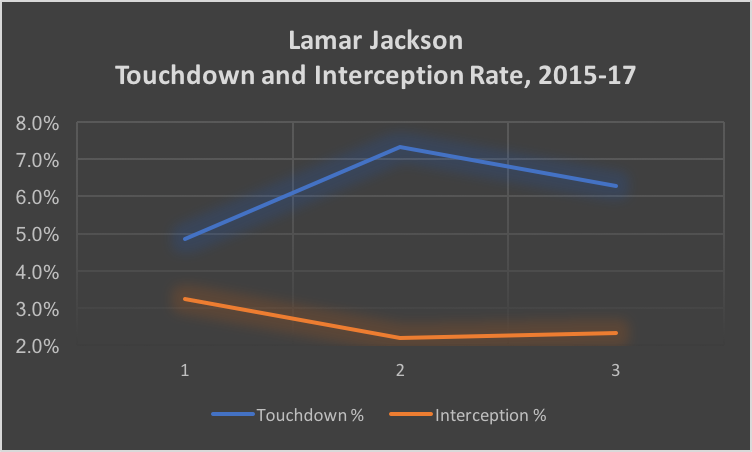 One of the biggest knocks on Jackson is his lack of completion rate, and this is one of the narratives that Josh Allen truthers have been using to compare the two; theyâ€™re not even close. Jackson -- despite the low completion rate relative to the NCAA average (60.2 percent in 2017) -- has improved his accuracy annually and also sustained a strong 8.6 yards per attempt over his most recent two seasons (7.5 average in 2017), while raising his touchdown production and lowering his interception rate. In fact, this past year, Jackson only had four below-average routes in his passing tree.

Another complaint? His lack of pocket presence. Some analysts seem to believe Jackson is a one-read-then-run quarterback who canâ€™t manage a pocket under pressure. Unfortunately for that narrative, the helpful folks at Pro Football Focus provided this tidbit: Jackson had the lowest interception rate when under pressure among Power 5 conference opponents in 2017.

Whatâ€™s more, Jackson adds to this upside passing profile an absolutely devastating ground presence. His 50 rushing scores are tied for the 21st-most among any player in the NCAA since 2000, and among quarterbacks, his 7.63 percent career touchdown rate is topped by just Colin Kaepernick, Keenan Reynolds, Tim Tebow, and Dak Prescott.

While only two of those names ever became above-average NFL starting quarterbacks (and Dak is still early in his career), again Jackson brings a balanced profile of passing and rushing to bear. Per our nERD metric (essentially an indicator of a teamâ€™s value against the average team), Jackson led the 14th-best passing offense and second-best rushing attack in the FBS in 2017 -- a testament to his dual ability.

An offense built to use Jacksonâ€™s unique and special talents to their fullest could be one of the most impressive and impactful in the NFL. The comparison is obvious, but Michael Vick in his prime is the closest thing that weâ€™ve seen to what Lamar Jackson could be in the NFL. The only way to describe that: game-breaking.

One bird becomes another, as Jackson was selected with the 32nd pick of the NFL Draft by the Baltimore Ravens.

The Ravens traded two second-round picks (one in 2019) and swapped fourth-round picks to get the 32nd spot from the Philadelphia Eagles. By selecting Jackson in the first round, the Ravens signaled that they believe he is a worthwhile successor to current starter Joe Flacco, whose guaranteed money on his contract runs out after the 2018 season. For a player considered raw by NFL standards, it is perfectly understandable that Baltimore would sit Jackson behind Flacco for a year and let him get caught up to the speed of the pro game before throwing him into the fire.

These offenses accounted for 0.04 schedule-adjusted Net Expected Points (NEP) per play on average -- the 49ers' years were particularly impressive -- solidly above the NFL average from 2006 onward (0.02). There will be plenty of room for Jackson to grow in the NFL, but he has a solid coaching staff to learn from, and it's not like there's a ton standing in his way.

Baltimore, in 2017, ranked seventh-lowest in schedule-adjusted Passing NEP per play on the arm of Flacco. In fact, of the 45 quarterbacks to drop back at least 100 times, Flacco's own Passing NEP per drop back was 14th-lowest. Bad plays left and right have caused the Ravens to begin doubting their one-time Super Bowl quarterback, and it's hard to blame them. If a team isn't getting better in the NFL, it's getting worse.

The Ravens made a decision on Thursday to add more explosiveness to their future offense. While Jackson should get the entire 2018 season to learn and not start, his future upside (possibly as soon as 2019) is sky-high with Baltimore.