The Jacksonville Jaguars Pass Defense Is On an Historic Pace

The plan for the Jacksonville Jaguars was to have a fun and potentially great defense lead the way in 2017. The Jaguars might only be 3-3 in the standings -- though thatâ€™s enough to be tied for the AFC South lead -- but part of this defense has been even better than expected.

Jacksonville has the best pass defense in the league this season and itâ€™s not particularly close. By Adjusted Defensive Passing Net Expected Points (NEP) per play, the Jaguars are more than twice -- nearly three times -- as good as the next-best pass defenses, the Seattle Seahawks and Buffalo Bills.

The chart below illustrates each teamâ€™s Adjusted Defensive Passing NEP per play through the first six weeks of the season (For defense, negative NEP is better.) 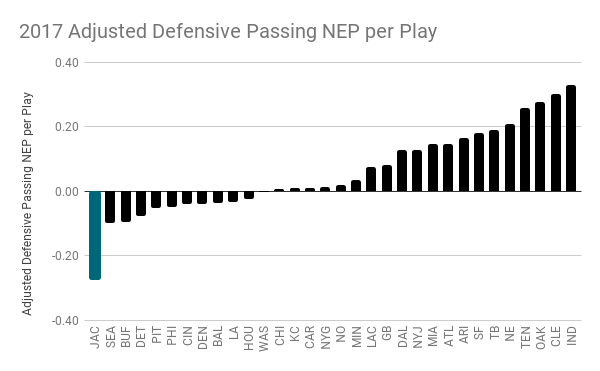 Currently the Jaguars sit at minus-0.27 while the Seahawks and Bills are at minus-0.10. That mark isnâ€™t just great for this season, it would be historically great for a pass defense.

We have NEP data going back to the 2000 season and Jacksonvilleâ€™s minus-0.27 in Adjusted Defensive Passing NEP per play would be the best in a single season since that point. The Jaguars also wouldnâ€™t have to stay exactly on this pace to still finish at the top.

The current leaders are the 2002 Tampa Bay Buccaneers and 2006 Baltimore Ravens who finished their seasons at minus-0.23. Here are the 2017 Jaguars and the other top-10 pass defenses by Adjusted Defensive Passing NEP per play since 2000:


Yes, the Jaguars have only played six games so â€œon paceâ€ doesnâ€™t have quite the same weight as it will later in the year. But for the rest of the season the Jaguars could play at around 80 percent of their current level and still end up with one of the best pass defenses weâ€™ve seen in nearly 20 years.

How Theyâ€™re Doing It

Clearly itâ€™s been hard for any offense to do much against the Jaguars through the air this season and thereâ€™s a lot involved in that. Itâ€™s not just that Jacksonville has a great secondary. They do. And itâ€™s not just that they have a great pass rush. They have that too. Itâ€™s how well those two aspects have worked together in order to force offenses into making mistakes in situations where they have to pass.

Letâ€™s take third-and-long. The Jaguars havenâ€™t been among the leagueâ€™s best in setting those up -- their 35 third downs with seven or more yards to go is tied for the 12th-fewest in the league -- but theyâ€™ve been among the best at taking advantage of those situations. Jacksonville has combined for more sacks and interceptions on those plays (7) than first downs allowed (six). The defense has allowed a first down on 17.1 percent of those plays (3rd-best in the league), and it has allowed an average of 3.71 yards per play, which is 6th.

Jacksonville is also forcing offenses to treat most plays like third downs since the Jaguars have started their average defensive drive with a 4.76-point lead this season, which is the 7th-best in the league. Those drives have been a massive success for the defense. Jacksonville opponents score on just 27.6 percent of their drives, the 2nd-best behind the Pittsburgh Steelers at 25 percent. When those points come, theyâ€™re more often field goals than touchdowns -- the Jaguars allow the 2nd-fewest touchdowns per drive and allow the fewest points per drive of any defense.

On drives that donâ€™t end in a score, itâ€™s not uncommon for the Jaguars to take control of the ball. An impressive 21.1 percent the of drives against the Jags end in a turnover, the best rate in the league. That comes from a league-high 10 interceptions. The cornerback duo of Jalen Ramsey and A.J. Bouye each have 2 interceptions, but so does linebacker Telvin Smith. Safety Tashaun Gipson leads the team with 3.

Then thereâ€™s the defensive line, which has done a better job at getting to the quarterback than any other team this season. The Jaguars are first in pressure rate, per Sports Info Solutions charting from Football Outsiders, and they have the best sack rate in the league at 10.7 percent. Calais Campbell leads the way with 8 sacks, while Dante Fowler Jr. and Yannick Ngakoue have 4 each. Jacksonville is the only team to have three players with at least 4 sacks through Week 6.

With all that together, the Jaguars have allowed 2.8 Adjusted Net Yards per attempt, which takes yards per attempt and adjusts for sacks and interceptions. As one would imagine, thatâ€™s the best mark this season, and the Jaguars would be the first team to be below 3.0 in ANY/A since the 2002 Buccaneers finished at 2.3.

Football is full of small sample sizes, and itâ€™s easy to get carried away with things like this before the halfway point of the season. However, the Jaguars have been completely dominant to this point.

It helps that Jacksonville really hasnâ€™t played a slate of great offenses -- though the Los Angeles Rams are the 3rd-best passing offense by Adjusted Passing NEP per play and they had their worst game of season against Jacksonville last week -- and they really wonâ€™t for the remainder of the season. Of Jacksonvilleâ€™s 10 remaining opponents, only one currently ranks in the top-half of teams by Adjusted Passing NEP per play, the 12th-ranked Los Angeles Chargers.

Whether this exact formula will allow the Jaguars to win games or not remains to be seen, but we can safely say that this pass defense is even better than advertised and might be the best unit put on the field in quite some time.