UFC Daily Fantasy: The 15 Best Pound-For-Pound Fighters on FanDuel in 2022

Doyle was second on the team in targets, receptions, and receiving yards, and his presence is a big reason why new general manager Chris Ballard was content to send Dwayne Allen to the New England Patriots. With Allen now gone, Doyle is set to be the Coltsâ€™ starter for 2017.

But this isn't about Jack Doyle -- itâ€™s about the tight end who could become this yearâ€™s version of him, and it happens to be the guy behind Doyle on the depth chart: Erik Swoope.

Just as the Colts showed confidence in Doyle by giving him a three-year, $18.9 million deal this offseason, they also showed some in Swoope by not selecting any tight end in what was an incredibly athletic tight end draft class.

This will be Swoopeâ€™s fourth year as a football player, ever. He switched sports after college, following four years on the University of Miami basketball team. He continues the tradition of basketball players becoming tight ends along with Antonio Gates and Jimmy Graham, who also did so at Miami. But even Graham crept onto the Hurricanesâ€™ roster his senior year, while Swoope didnâ€™t. His football career started in the NFL.

Swoope went undrafted as spent most of 2014 on the practice squad until making the Coltsâ€™ roster at the end of the season. He played in just one game during 2015 before he saw time in all 16 last year. Thereâ€™s not a huge sample to go on to evaluate Swoope -- he played on just 22.3 percent of the teamâ€™s offensive snaps -- but thatâ€™s kind of the point here. There was a limited sample for Doyle before his 2016 breakout, too.

Swoope saw just 22 targets in 2016, but those 22 targets were really, really good. Among 76 tight ends with 10 or more targets last season, he was the third most efficient by Net Expected Points (NEP), our metric that uses historical down and distance data to determine what is expected of a player on each individual play. Positive NEP is earned when they perform above expectation, and vice versa. He was just one of three players, along with Rob Gronkowski and Levine Toilolo to be worth over a full expected point per target.

On a per-target basis, he was more impactful than Doyle, though admittedly their roles were much different. Still, Swoopeâ€™s 1.11 Reception NEP per target almost doubled Doyleâ€™s 0.57, which was below the league average of 0.60.

Itâ€™s not completely fair to compare their 2016 numbers. But what about the year before when each saw a bigger role? For Swoope, that would conceivably be 2016, and 2015 for Doyle.

Doyle was even less involved in the 2015 offense than Swoope was last season, but Doyle was also the third option with Coby Fleener still on the Indianapolis roster. However, it was clear Doyle was going to see more time in 2016 with the departure of Fleener to New Orleans, and the same stands true for Swoope with Allen now in Foxborough.

Only the Tennessee Titans ran a higher percentage of plays last season with at least two tight ends on the field than the Colts, and that was just by a tenth of a percent -- 40.3 percent to 40.2. There were only eight other teams in the league to do it at least 30 percent of the time. That might go down some with the Colts having their best third receiving option in a while with the signing of free agent Kamar Aiken, but Indianapolis has long been a team reliant on two tight end sets.

Everything we take from Swoopeâ€™s 2016 is a small sample, but there was a lot of good stuff to report. When Swoope was targeted he did two things really well -- run deep and gain yards after the catch. Just doing one could be enough to be a useful tight end, but excelling at both is something that stands out.

Hereâ€™s the top-10 tight ends in average depth of target (aDOT) among those with at least 10 targets last season. 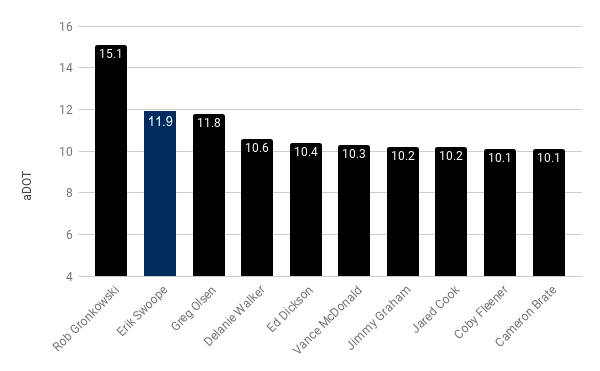 Gronkowski is in a class on his own, then thereâ€™s the second tier with Swoope and Greg Olsen before thereâ€™s another drop of over a yard to the rest of the top-10. Just about every player on the list is someone youâ€™d think of when picturing a receiving tight end. Itâ€™s also worth noting aDOT for tight ends is one of the fastest stabilizing statistics in a given year.

Now letâ€™s look at average yards after the catch. Most of them, as youâ€™ll see, are different types of players. 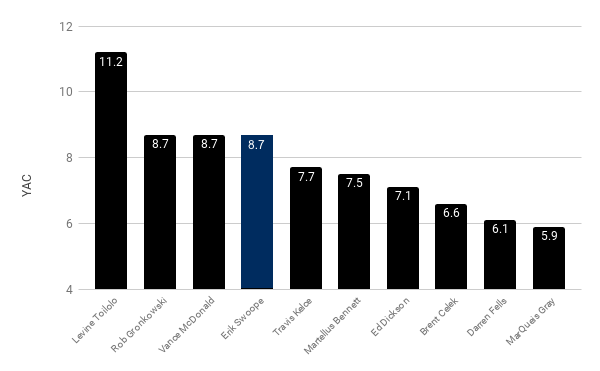 Toilolo had a huge lead on the field, a benefit from being the third tight end option in a Kyle Shanahan offense that's set up for tight end success. Swoope again finds himself in the second tier, along with Gronkowski and Vance McDonald. Swoope, Gronk, McDonald, and Ed Dickson are the only four to be in the top-10 of each.

For this being just Swoopeâ€™s fourth year playing football, he has some of the minute details down, especially in route running. Heâ€™s already great at selling fakes and getting defenders out of position.

Hereâ€™s a play from a Week 16 game against the Oakland Raiders. Swoope lined up on the outside across from Nate Allen. At the snap, he broke in as if he was going to run a slant and Allen also broke in for an attempt to jump the route and get his hands on the receiver. But Swoope initiated the contact, got to the outside, turned Allen around, and broke free for a 45-yard gain.

His ball tracking is also commendable on this play with the pass just slightly underthrown.

He went one step further against the Jacksonville Jaguars in Week 17. Swoope started in the backfield then motioned wide to the left, followed by safety Johnathan Cyprien. On Swoopeâ€™s route, he gets Cyprien to turn his hips three different times -- first with a head fake inside, then a false step to the outside, then finally his actual break back inside.

On back-to-back plays against the Minnesota Vikings in Week 15, Swoope burned two linebackers. On the first play, he faked a short curl from the slot, which froze Eric Kendricks, then broke across the field for a nice yards after catch opportunity.

On the next play, Swoope was in a three-point stance at the left end of the line, fought off contact from Chad Greenway, and beat him downfield for a 27-yard touchdown.

Thereâ€™s a lot to like about Swoope, and itâ€™s not difficult to see a way where he works himself into increased playing time during the season. In an ideal scenario, he could play the Coby Fleener role in the Coltsâ€™ two tight end sets. Fleener saw great volume there without really ever being a great tight end.

Swoope looks like could already be more naturally talented and as that gets refined, 2017 could be his first chance at an extended look to show it.