3 Week 2 Storylines to Watch: The Chargers Without Keenan Allen

Week 1 of the 2016 NFL season answered some questions but wound up generating plenty more.

Dallas Cowboys rookie rusher Ezekiel Elliott had a rather pedestrian debut against the New York Giants, rushing for 51 yards on 20 carries with one score, but a veteran back -- DeAngelo Williams -- played up to his standards from last year.


Despite not having Le'Veon Bell, Martavis Bryant, and Markus Wheaton against Washington, the Pittsburgh Steelers showed that they are still a dynamic offensive football team, putting up 38 points. Until we see otherwise, the combination of Antonio Brown, Williams, and Ben Roethlisberger look to be just fine from a fantasy football perspective.


And finally, Shaun Hill got the start for the Minnesota Vikings, getting a win against the Tennessee Titans. Two defensive touchdowns were the key, and with Sam Bradford waiting in the wings, it's still unclear who will get the nod in Week 2.

When San Diego Chargers wide receiver Keenan Allen went down last Sunday with what turned out to be a season-ending ACL tear, everything changed for the Chargers.

The unfortunate injury for Allen, who had a chance to lead the NFL in receptions, will certainly impact the offense as a whole.

According to Rotoviz' Game Splits App, the Chargers just haven't been the same offense without Allen in the lineup. 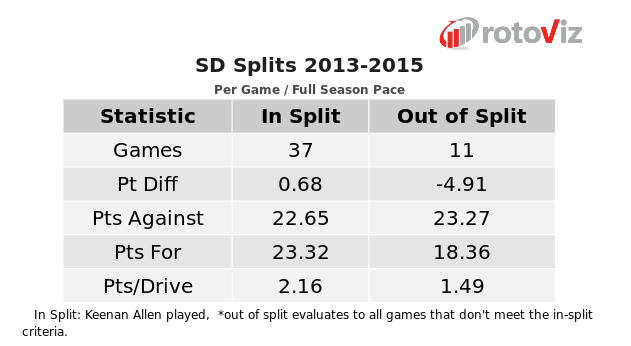 Scoring almost five fewer points per game without Allen since 2013, itâ€™s fair to question the efficacy of the Chargersâ€™ offense moving forward this season.

Tyrell Williams and Dontrelle Inman, both white-hot waiver wire adds this week, are in line to replace the market share formerly occupied by Allen. Danny Woodhead and Antonio Gates will also very likely see a bump in targets. Philip Rivers, however, likely sees a dip in fantasy production, landing closer to the back end of the QB1 heap as opposed to the front.

Williams and Inman may be just fine, but replacing one of the best wide receivers in the league for the next 15 games is certainly a tall task.

In Week 1, Freeman played 36 offensive snaps, and Coleman played 32 and out-targeted Freeman 6 to 4.

JJ Zachariason advises you to sell Freeman if you can, and assuming Coleman stays relatively healthy for the remainder of the regular season, some degree of timeshare is a very likely outcome.

When the Philadelphia Eagles traded Sam Bradford prior to Week 1, it was pretty clear they were choosing to roll with their first-round draft pick Carson Wentz right away. And even though this meant an exponential jump in level of competition, Wentz acclimated himself well, leading Philadelphia to a 29-10 win over the Cleveland Browns.

And sure, it was against Cleveland, a team sporting one of the worst defenses in the league. And granted, Wentz completed just 59.5 percent of his throws. But in the midst of tossing two touchdowns and no interceptions, Wentz showed both positives and negatives, according to Dan Pizzuta.

This weekâ€™s matchup against Chicago looks prime on paper with the Chicago Bears currently starting one of the weakest secondaries in the NFL. Chicagoâ€™s pass defense did rank 14th last week in Defensive Passing Net Expected Points (NEP) on a per-play basis, but if Will Fuller doesn't drop a long touchdown, those results likely look much different.