Jim Sannes  —  @JimSannes May 7th, 2019
Share on Facebook Share on Twitter
Kansas has always been a track where passing was very possible. What does that mean for NASCAR DFS, and how will the new rules package impact that on Saturday night?

This week, the Monster Energy NASCAR Cup Series goes under the lights at Kansas Speedway for the Digital Ally 400. What do we need to know about the track before filling out our NASCAR DFS lineups? Let's check it out.

The deeper we get into the 2019 season, the larger our sample size with the Monster Energy NASCAR Cup Series' new rules package gets. We'll get a chance to utilize that sample size on Saturday night at Kansas.

Kansas is a 1.5-mile track, and the full tapered-spacer package will be in place for the fourth time this season. The first three races have given us a pretty good idea of what to expect, and that's an exciting race with plenty of passing. That's something Kansas provided even before the new package was in place.

At every track, drivers who qualify at the front are going to have better odds of finishing there, as well. That's still true at Kansas, but by no means is qualifying well a prerequisite for a top-10 run. Here's a look at the past six races and where the top-10 and top-5 finishers have started the race.

Back in 2017, Ryan Blaney started dead last but managed to work his way forward for a third-place finish. Kyle Larson finished in the top five in both of 2018's races after starting in the second half of the field. You could make passes at this track before, and that ability should only be amplified under the new rules package.

That plays into place-differential points, and we'll get back to them in a second. But it's worth noting there are still some laps to be led.

Kansas is scheduled to have 267 laps, giving us 26.7 points available for laps led on FanDuel. That's certainly less than the recent short tracks, but it's far from being a non-factor.

In the past six races at Kansas, one driver has led at least 100 laps each time. There have been 11 total drivers who have led 70 or more laps, and you'll happily take that seven-point bump on FanDuel.

The one difference between Kansas and some other places -- at least in this specific sample -- is that you don't often see a single driver dominate the entire race. The maximum number of laps led at Kansas the past three years is 172 by Martin Truex Jr., and no other driver has led more than 116. In general, it's a pretty competitive race, which can lead to a flatter distribution of the laps led.

When drivers do lead laps, they tend to do so from near the front of the pack. Of the 11 drivers to lead at least 70 laps, seven started on the front row (including all six pole-sitters), and another started third. Larson led 101 laps from 22nd, but that seems to be a bit of an outlier.

This leaves us with the question of how we balance finding place-differential candidates with hunting for laps led. To get a better grasp on that, let's look at past Kansas races -- and other races with this package this year -- to see what we can learn.

Let's start things off here by looking specifically at Kansas before looping in what we've seen thus far in 2019 to see how that should alter our process.

We've had two races at Kansas since FanDuel started offering contests last year. Here's the best lineup you could have constructed during last year's spring race while staying under the $50,000 salary cap.

And here's the same from the fall.

In both races, there was one driver who did top the 100-laps-led barrier and another who led 40 or more laps. So laps led are still very much a part of the equation.

But both also had multiple drivers starting 20th or lower. One of them actually fit into the above bucket, as well, because Larson was a freak at Kansas in 2018. but it also does fit with what we discussed before: both laps led and place-differential points are important in Kansas.

In the past six Kansas races, 10 drivers have topped 75 FanDuel points. Four of them started in the top six, two of them started between 7th and 20th, and four others started outside the top 20. In other words, you could score points from anywhere as long as your car was good enough.

To further flesh this out, here's a look at the FanDuel points scored by each driver in this six-race span based on where they started. Drivers -- on average -- tend to score more points when they start at the front, but big days were possible no matter where you started. 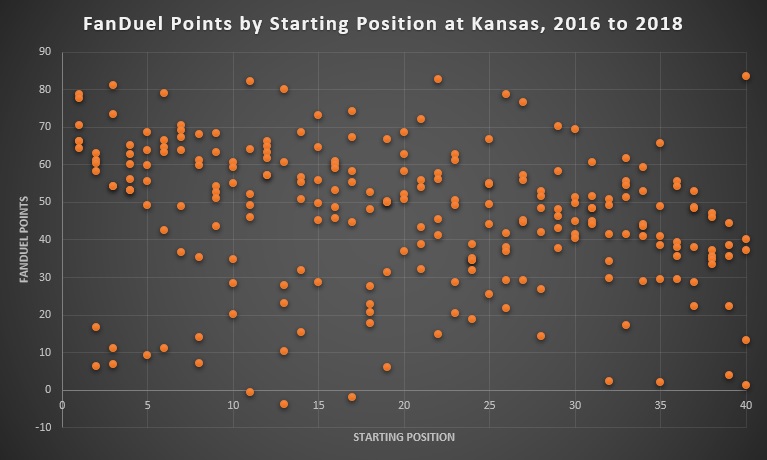 As a reminder, this is even before NASCAR introduced its new aero package, which was created with the purpose of making passing easier. They didn't need that at Kansas.

When we take a peek at what has happened with the new aero package this year, it's going to look like the other tracks have just turned into what Kansas has always been.

Let's combine the races at Texas, Fontana, and Las Vegas all into one graph like the one above to see the scoring breakdown in those races. Because not all of the races had the same number of laps, the points for laps completed will be omitted, though laps led will still factor in. Once you make that adjustment, here's the scoring distribution in those three races. 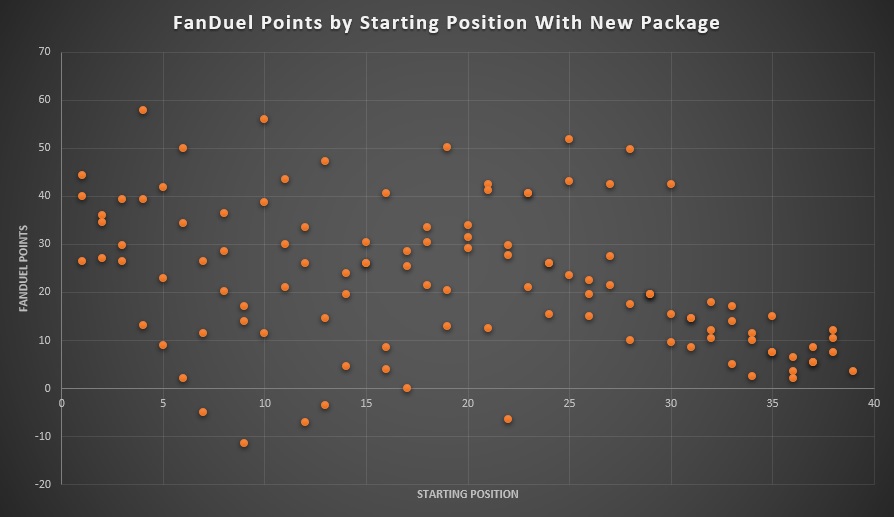 There are two big caveats here. First, it doesn't mean we should ignore laps led. We've still had drivers dominate races, and that's in play this weekend at Kansas, as well.

Second, that was under the old qualifying rules, which may play a big role this weekend.

Last week, NASCAR announced it was changing the qualifying format back to single-car runs rather than the group qualifying it had used at each of these three races. Group qualifying allowed cars to draft during qualifying, meaning that a fast car could qualify poorly if they didn't have the right plan of attack.

Basically, it made qualifying more random, and that's not going to happen anymore. In theory, there should be fewer quality cars starting all the way in the back, which would put a lid on that place-differential upside.

Saturday's race will be an impound event, meaning that there could be cars that fail post-qualifying inspection and have to start in the back. If that happens -- as long as they show speed in practice -- history has shown us that those drivers will be really solid DFS plays. But outside of that, we likely shouldn't expect to have high-quality cars starting further back.

So, what should be our baseline plan of attack when entering the race? The answer may feel a bit lacking, but it's simultaneously liberating: you don't need one.

Because drivers can score points from pretty much anywhere in the pack in Kansas, we don't need to target a specific starting range when filling out our lineups. Instead, we can look at practice times, see which drivers figure to be fast and finish well, and plug them into our lineups.

The one restriction that we should have -- based both on past Kansas races and on what we've seen out of the new rules package -- is that we shouldn't go overboard in targeting drivers starting closer to the front. There aren't a ton of laps to be led, giving drivers closer to the front a bit less upside than they'd have elsewhere. You should feel free to get one driver up there in your lineup (and likely should have at least one in each), but it's important not to go too overboard there.

Kansas definitely will not have pack racing for a full run, but it still lends itself to a similar line of thinking to what we deploy at Talladega and Daytona. You make an assumption around who wins the race, and then you build the rest of the lineup around that assumption.

If your pick to win starts second, it'll be harder for others starting at the front to score well. But if your win pick starts 12th, then you could take another driver starting higher in the order under the assumption they could lead laps early in the race.

When you're trying to make those selections, you can definitely look at practice data. We should get 10-lap averages for Kansas, which will have value in selecting drivers.

Practice sessions at tracks where the draft is a factor, though, carry a bit less predictive value. While it's okay to factor them in, you'll likely want to put more weight on current form.

Specifically, it'll be helpful to see how drivers have performed at other tracks using this same rules package where the requisite equipment and driving styles have been in play. This means you'll want to dig back into what happened at Texas, Fontana, and Las Vegas to see what you can find. If a driver had impressive runs there, we shouldn't be surprised if they duplicate that on Saturday night.

The overall thought process for Kansas should be that you want to target the fastest drivers, regardless of where they are starting. This track and this rules package give you that freedom, and you should take advantage while you can. You still have to consider roster construction and how one driver doing well would affect another, but it's a pretty free-flowing strategy that should make filling out lineups a delight.