Weâ€™ve all suffered heartbreak at one time or another.

If youâ€™ve ever been in love, you know that itâ€™s not an easy road to travel. There are always potholes and pitfalls, twists and turns, and sometimes the journey ends. Occasionally the car of love will just run out of gas, sometimes you get into a wreck. Either way, it stings afterward, and we find it hard to trust the next person who wants to take that trip with us. Weâ€™ve all been there in one way or another.

Cleveland Browns rookie wide receiver Corey Coleman looks like everything we could want in a fantasy option: heâ€™s got great NFL Draft pedigree, he performed extremely well in college, and he is walking into a situation where he should easily be afforded the most targets on the team. On average, he is going at pick 9.10 in standard redraft leagues (per Fantasy Football Calculator), as the 44th wide receiver off the board.

Why is no one trusting him?

I canâ€™t promise you a Cleveland Brown wonâ€™t hurt you in fantasy football again, but Iâ€™m willing to try if you are.

Never Gonna Give You Up

Letâ€™s take this fantasy football love story back to before we met Coleman, when he was a wide receiver at Baylor University. Coleman dazzled the Big 12 in the Bearsâ€™ spread offense -- which Baylor is infamous for -- where he rode this scheme to statistical supremacy. His speed was simply too much for college cornerbacks. They couldnâ€™t stop him.

But he didn't just rack up stats on big plays; he earned a ton of work for his team. The table below shows Colemanâ€™s market shares -- his percentage of team production -- in targets, receiving yards, and touchdowns in his three years in college.

Itâ€™s tough to look at the statistics of a system like Baylorâ€™s and be able to compare them to other teamsâ€™ -- Baylorâ€™s spread attack often uses quick-tempo attacks downfield, no-huddles, and simplified route trees to keep the defense on their heels. Therefore, the stats are often inflated for players coming out of up-tempo spread attacks.

When we use market shares to examine Colemanâ€™s production within his own team, however, we can see that he progressed steadily into the top role for the Bearsâ€™ receivers, and dominated attention from his quarterbacks by his final year in school. Almost one-third of the teamâ€™s pass attempts went his way, and he accounted for nearly half of their receiving scores that season.

In fact, when we compare Colemanâ€™s target market share to the rest of the NCAA last year, his was the 10th-highest among the 62 receivers with at least 100 targets, and he was fifth-highest in receiving yards per target to boot.

Itâ€™s worth noting that, as I mentioned before, Baylor uses a highly-simplified route tree for their wide receivers. In the NFL, top-tier wideouts need to know the full route tree in order to properly execute the playbook. Matt Harmon of NFL.com digs into this sort of thing with his Reception Perception project, and he laid out the percentages of route Coleman ran in college; the table below shows each route he ran more than 10 percent of the time.

With over 50 percent of his routes coming from downfield, straight-line speed routes (the curl and fly), there is some concern that Coleman will find a transition to the NFL difficult. The NFL receiving game demands a lot more precision in route-running, technique in battling defensive backs, and timing in making the catch and turning upfield. Harmon doesnâ€™t worry about Colemanâ€™s qualities in this, though -- he notes that Colemanâ€™s above-average Success Rate vs. Coverage (SRVC) against man, zone, and press coverages is downplayed by public and media perception. Coleman can get separation against man coverage and read zones, as shown below.

He even earned above-average marks in contested catch situations, according to Harmon's work; Coleman is the whole package.

We have a player who dominated his opponents in college, and commanded a whopping share of his own offenseâ€™s attention. Why are people still down on him?

Colemanâ€™s slighter physique -- he stands 5â€™11â€ and 190 pounds -- may seem like a deterrent to NFL success, but that shouldn't be the only metric that defines him. The chart below from MockDraftable shows us what percentiles of wide receiver prospects Colemanâ€™s workout metrics from the NFL Combine land him in. 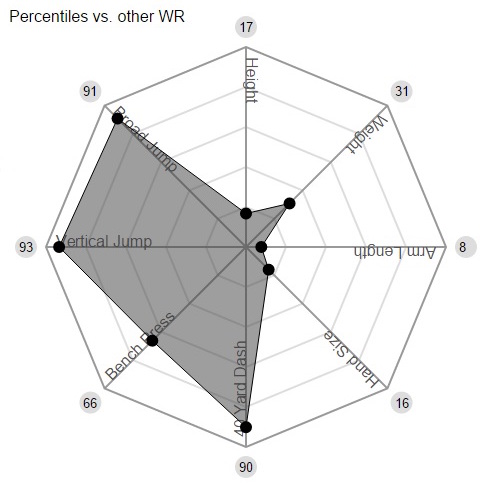 Coleman is well below average in size percentiles, but his Speed Score -- a weight-adjusted forty-yard dash metric (originally developed by Football Outsiders) -- ranked eighth in the 2016 wide receiver class, ahead of physical marvels like Braxton Miller and Sterling Shepard. In addition, due to an impressive 40.5â€ vertical jump and 129â€ broad jump, Coleman has a theoretical Catch Radius (developed by FakePigskinâ€™s Jay Holmes) better than the much larger Miller and Laquon Treadwell.

By Holmesâ€™ metrics, he also compares well to anyone from A.J. Jenkins and Chris Owusu to Mark Clayton, Greg Jennings, and Odell Beckham. PlayerProfiler.com confirms that final comparison.

There is a broad range of outcomes possible for Coleman. Perhaps that uncertainty worries fantasy football drafters too.

Really, though, that uncertainty should be hope.

Our algorithms here on numberFire project Coleman as our 42nd-best fantasy option at wide receiver heading into training camp, with 68 catches for 881 yards receiving and 3 touchdowns in 2016, which means that he still is slightly undervalued at his current ADP. In addition, his projection puts him in the same range as Michael Crabtree and John Brown, each of whom are going a round or two earlier than Coleman. His ceiling could put him around the same level as Michael Floyd or Donte Moncrief, who are going in the early fifth and sixth rounds of drafts.

As I noted in a piece recently, if Robert Griffin III wins the starting quarterback job, the deep-route demon Coleman could flourish. From 2012 to 2014, Griffin had a 45.6 percent completion rate on deep passes -- the sixth-best mark among quarterbacks who attempted at least 100 deep passes in that time. Josh McCown completed just 39.1 percent of these passes last year, but offered significantly more deep passing volume than other Brownsâ€™ quarterbacks.

In Coleman, we have a prospect whose immense physical tools offer a nearly immeasurable upside; he joins a situation where there are plenty of open targets to claim, leading to an actually secure fantasy floor. At best, Griffinâ€™s bread-and-butter is the deep ball and Coleman could thrive as a deep-target maven; at worst, McCown will offer more volume of passes.

How do you know Corey Coleman wonâ€™t break your fantasy heart like all the other Browns before him? You donâ€™t. You could spend that middle-rounds draft pick on someone else, someone safer; but then what are you doing reading all the way to the end of this article with us?

Donâ€™t sleep on this fantasy heartthrob. Let him onto your roster and give him a chance.

Which Browns Quarterback Will Help the Offense More in Fantasy Football?