You Need to Avoid Jarvis Landry in Fantasy Football in 2016

Miami Dolphins wide receiver Jarvis Landry was awesome in 2015 for fantasy owners. He caught 111 passes and finished as a top-12 receiver.

While this may just seem like a good bit of trolling, I can assure you that there is plenty of evidence to support this claim.

My biggest beef with Landry is his extreme dependence on volume, which is evident if we look at his Reception Net Expected Points (NEP).

On every play, there's an expected point value an NFL team has for the drive based on yard line, down, and distance. What happens on that play can change the expected point value on said drive. What NEP does is aggregate the values gained or lost on every play into a single, net number. You can read more about NEP in our glossary.

Here are some facts regarding Landry's 2015 season:


Take a look at Landry's 2016 next to a couple of wide receivers with similar Reception NEP totals.

Donte Moncrief was the closest player to Landry in Reception NEP in 2015 but finished 26 spots lower in final PPR finish at wide receiver. Michael Crabtree was also fairly close but finished six spots lower. His presence in this table will become more useful in a minute, but before I move on, you'll notice that both of these players received fewer targets than Landry did.

This is the primary reason Landry outscored them. His additional targets led to more receptions, which are obviously a point each. But his actual play on the NFL field wasn't any better than theirs. That begs the question: what if that volume goes down? And perhaps more importantly, will it?

I promised you more conversation about Crabtree, so here it is.

On the left, you'll see the 2015 finish for both Landry and Crabtree. As noted above, they are fairly close. However, the right column is the average ADP from MyFantasyLeague and Fantasy Football Calculator.

But Landry's teammate, DeVante Parker, was taken 14th in the same draft class and averaged 74 yards receiving during the final six games of 2016 when he was healthy and in a sizable role. That's more than Cooper's 67 yards per game, and 56 yards per game over the same time frame.

So why is Landry's ADP still so high?

Landry Is No Manny

One of the biggest reasons I've heard people talk about Landry evading the presence of Parker is new head coach Adam Gase. After all, Gase's offense supported both Demaryius Thomas and Emmanuel Sanders as top-five wide receivers in 2014.

But even ignoring the obvious fact that Ryan Tannehill is no Peyton Manning, there is the equally obvious -- but less talked about -- fact that Landry is no Manny Sanders. 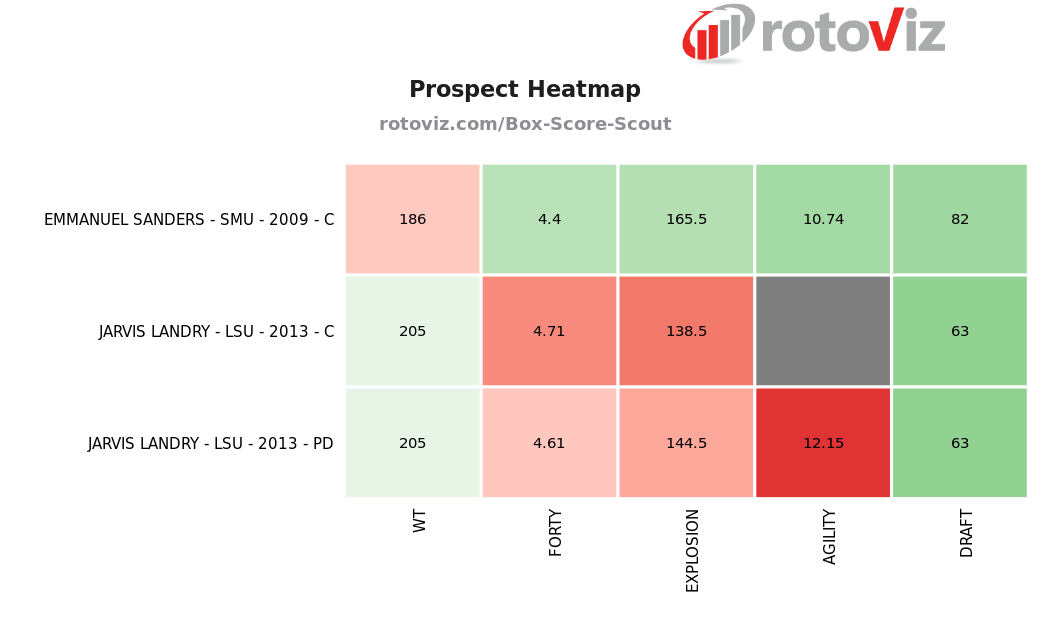 Taking a look at their measurables in the RotoViz Box Score Scout App, we can see that Landry is nowhere near the player that Sanders is in terms of athleticism.

That is probably why Landry's average depth of target (aDOT) sits at just just 7.4, according to Pro Football Focus (115th among qualifying receivers), while Sanders' was literally twice that at 14.8 (23rd). That was without Gase as the offensive coordinator in Denver.

The idea that they could be used the same in a Gase offense is somewhat ridiculous given the data and the fact that Miami, in addition to Parker, just drafted Leonte Carroo, who is talented and already making waves at OTAs.

Landry was someone I had already pegged to regress due to his high fantasy points per game over expectation, and after breaking it down deeper, it seems even more likely that he won't repeat his 2015 success.

He survived on extremely high volume last season and is not receiving the same kind of discount as his contemporaries when we consider the other young wideouts in the fold. It also doesn't make much sense to compare Landry to a player like Sanders, who is much more athletic and is used differently.

Fantasy players need to stay away from Landry. It is looking less and less likely that he can pay off his ADP by the day.