Establishing the Run Is a Recipe for Losing in the NFL

If you've ever watched a even a quarter of NFL football on television, there's a good chance that you've heard a football-player-turned-analyst intimate that a certain team needs to establish the run and control the game.

It's a thought that is ingrained in football.

In theory, running the ball lets you control the game, and controlling the game leads to wins.

The only problem with that line of thinking is pretty much everything.

It's Simply Not True

Back in the day -- whatever that means to you -- the recipe to success in football has been defense and the ground game. That's starting to change, sure, but even in 2016, we have NFL head coaches clamoring about something called an "exotic smashmouth" offense, which is a fancy way of saying, "We'll lose, but we'll make sure our guys get hit a lot."

Because, for some reason to certain NFL head coaches, making sure your opponents feel like they've been in a fight is more important than winning the game.

The worst part of all is that running the ball doesn't even yield the ostensible results coaches and coordinators are seeking.

There's no evidence that an elite running game helps a defense, so the causal relationship between the two is pretty much a myth -- unless you get anecdotal, and you know we don't do that.

And according to our Net Expected Points (NEP) metric, which quantifies a team's performance relative to league-wide expectation level, rushing doesn't lead to wins -- passing does. That's part of why investing primo draft capital into running backs isn't smart.

In fact, if we look at NEP in a broader sense -- as in not just rushing versus passing efficiency -- we can see that the ground game's relationship with wins is weak relative to other facets of the game.

To make sure we're on the same page with NEP before going further down the rabbit hole, think of it this way: a 10-yard pass isn't very helpful if it comes on 3rd-and-20. If it comes on 3rd-and-8? That's money. NEP accounts for the expected points swings in those circumstances, and play-after-play over a full season, NEP really adds up to show how a team or player performs. You can scope out our glossary for a more detailed explanation.

So, here is how NEP, after adjusting for opponent strength and controlling for volume by examining things on a per-play basis, has correlated to wins over the past 16 NFL seasons.

(To be clear, Defensive NEP scores indicate how many points a team denies their opponents, so a desired score is negative; because correlations range from -1 to 1, the absolute value of these correlations is presented to avoid comparing negative values to positive ones.)

The only aspect of the game that has mattered less than offensive rushing efficiency over the past NFL 16 seasons has been stopping the run.

The middle tier, then, comprises overall defensive efficiency and pass defense. There's a pretty noticeable dip between each of the three tiers, and rushing and stopping the run haven't led to wins.

What About Traditional Stats?

So we've seen that rushing efficiency doesn't stack up to passing efficiency, but what about more normal measures of stats?

Well, here's where things get interesting. 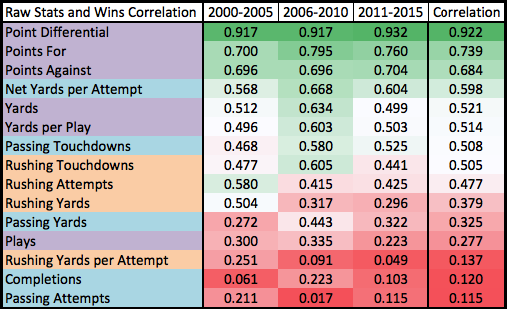 Ha! It's all there, black-and-white, clear-as-crystal! You stole fizzy lifting drink...wait.

Rushing (stats highlighted in orange) may not be as strongly linked to winning as things such as point differential, but they grade out well above passing completions and attempts.


This may, at first glance, seem as though it contradicts the previous section, but it all makes perfect sense.

Teams that are trailing have to throw the ball, so passing attempts can rack up quickly for bad teams. Teams that are winning can run the ball more often, and rushing attempts and yards are naturally going to go up if you're ahead in your games.

Let's try to account for that by focusing on first-half stats. If establishing the run is so important, after all, surely first-half rushing stats will look juicy.

I'm not trying to make it sound like rushing attempts don't matter, but they really don't matter in the grand scheme of things.

It's not like teams should never run the football. That's not the point. Some semblance of balance is necessary.

And, consistent with what we found in the previous section, it's not as if passing attempts are the key -- it's all about passing efficiency.

Just look at the drastic increase in the relationship between first-half passing yards and wins over this period.

This also, then, supports what we found in the first section, which dealt with NEP.

At the end of the day, rushing attempts are related to wins, but it's pretty clear that they haven't come in the first half of games when teams would be "establishing the run."

You can run the ball early if you want, and you can even come up with a terrible name for your offensive game plan, but unless you've got an efficient passing game to bolster the offense (and a defense that can stifle the pass, too), you're going to have a tough time winning games.

And that's only becoming clearer in the current era of the NFL.