I work in a specialized style of education called â€œcritical literacyâ€, which is essentially just a fancy phrase that means â€œthe ability to challenge nonsense when one is confronted with itâ€.

This skill comes in handy during the National Football Leagueâ€™s Draft, where the ads, the vignettes during pre-draft coverage, and even the commentary during the draft itself slip in little messages and assumptions that you, the fan, are just expected to believe. I was livid to see Tim Hasselbeck make a â€œwomen canâ€™t driveâ€ joke at Lindsey Czarniakâ€™s expense during the pre-draft run-up. I was confused when they called Robert Nkemdiche -- he of the major character concerns -- merely â€œeccentricâ€.

But I was genuinely disappointed that the commentators around the industry on draft night pounded the tables for this narrative that â€œgreat running backs help their defensesâ€, in justification of the Dallas Cowboys selecting running back Ezekiel Elliott at fourth overall.

Read Between the Lines

Why canâ€™t we simply be happy with the fact that Ezekiel Elliott could be a great running back behind the Dallas offensive line? Do we need to justify him by saying he could also be so incredible that he somehow affects the defensive side of the ball for the Cowboys too? Iâ€™m not sure that even the best players in NFL history could have done that.

Last summer, I looked at a few of these myths about a relationship between time-of-possession and defensive production when discussing the effect of Chip Kellyâ€™s â€œBlurâ€ offensive strategy on the NFL. The findings of this study indicated that there is little reason to believe that the speed of an offense -- or its ability to run out the clock -- really affects the quality of a defense. Our Editor-in-Chief JJ Zachariason also looked at whether or not defense helps quarterbacks.

But we havenâ€™t looked at how the run game affects a defense yet.

JJ posted an article this morning as well, where he outlined why Elliott was a bad value at fourth overall for the Cowboys. I feel differently, somewhat, but thatâ€™s not what I mention it for. In that piece, he uses r-value correlation -- measured on a scale of -1 to 1. The closer the value is to 1 or -1, the more direct of a relationship there is between two variables; the closer it is to 0, the more random the association is -- to prove that there is little-to-no statistical relationship between rushing value and defensive value. According to JJ:

â€œThe truth is, there's no correlation -- the r-value is 0.10 -- between rushing and defensive performance according to our schedule-adjusted Net Expected Points (NEP) metric. It may seem intuitive that holding the ball would help a defense -- and it might to a small degree -- but there are plenty of instances where that's not the case.â€

And this is clear with a snapshot, when you look at the top-five finishes in Adjusted Defensive NEP per play in 2015 compared to their ranks in Adjusted Rushing NEP per rush. The table below shows these teams.

There is no discernible pattern to these results, whatsoever. It might seem compelling that there are three teams in the top-10 of rushing value shown here, but we need definitive patterns of relationship to suggest that there is real causation between these two things, as the announcers on Thursday night so readily did.

For you visual-minded folks, this is the scatterplot of this comparison from 2000 to 2015. You can see, there is absolutely no pattern or indication of cause-and-effect due to this. 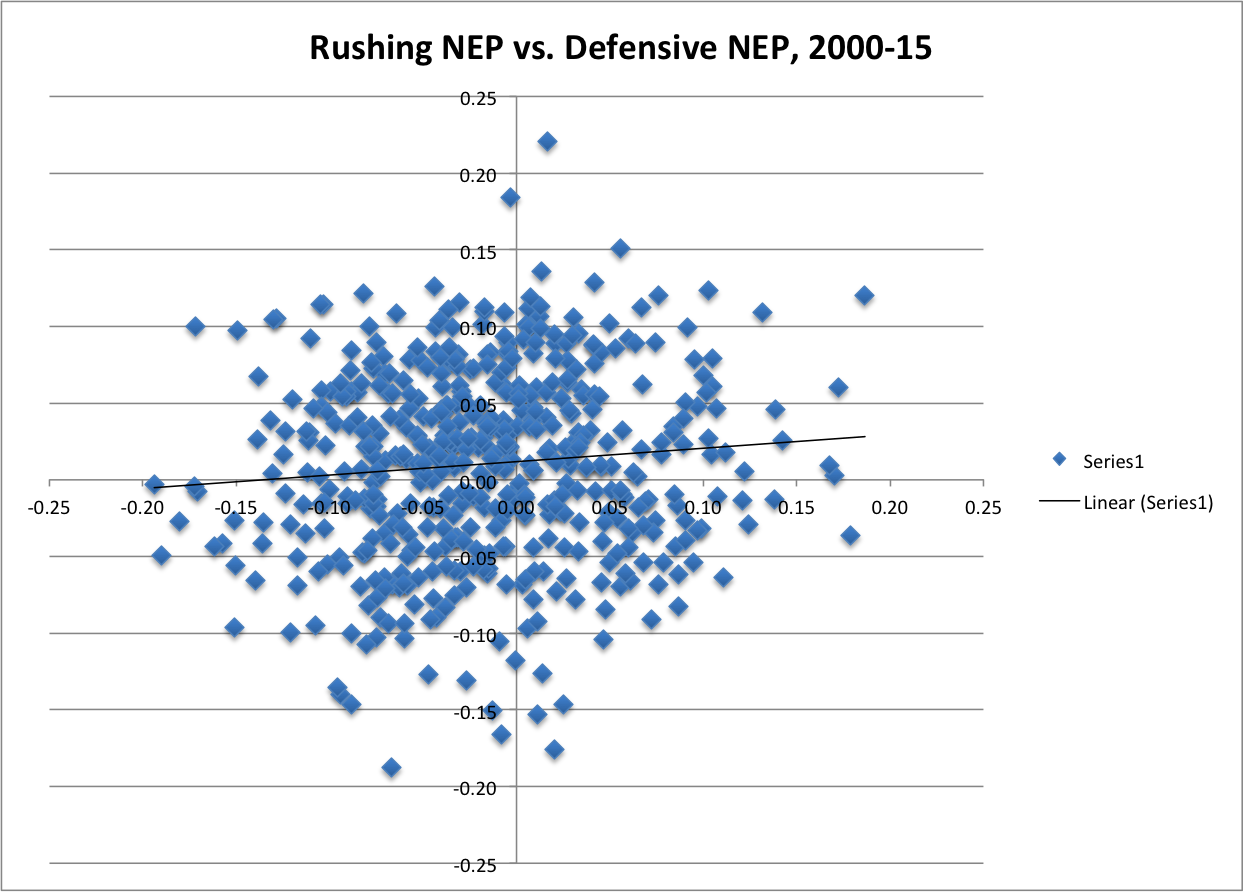 So if, as Cowboys head coach Jason Garrett states, the purpose of selecting Ezekiel Elliott was because, â€œHopefully you possess the ball more. You get more plays on offense, fewer plays on defense, and that allows your defense to play at a higher levelâ€, how do we test that? Itâ€™s simple, and Garrett lays out the steps perfectly for us. The logic is: a) if Elliott is good, then the Cowboys will have the ball more. Then, b) if the Cowboys have the ball more, their defense will be better.

I compared team Adjusted Offensive Rushing NEP per play marks over the past three years to their average time of possession stats to see if there was a correlation there. This seems like a logical conclusion, but the correlation is actually a startlingly low 0.17. Even if we look at just the "elite" running games and compare the most prolific rushing attacks against time of possession, the correlations actually drop to a hair above 0.00. There is almost nothing that shows, statistically, that better value rushing the ball leads to greater time of possession.

I still wanted to follow this through, though, and see whether or not time of possession on offense correlates to defense. If Dallas can find a way to keep the ball, would they still help their defense keep from getting gassed? The answer, in short, is no. There is a negative correlation between time of possession and Adjusted Defensive NEP per play, meaning that the longer a team holds the ball, the less value they give to their opponents, but a -0.15 correlation is so weak that there is no discernible pattern to hang our collective hats on here.

This is why we have to carefully critique the â€œold schoolâ€ talking points we hear around the NFL. We canâ€™t escape them, even on draft day, but they typically prove to be beliefs that have no grounding in the real play of the game.

I think Ezekiel Elliott will be a great enough running back for the Dallas Cowboys; he doesnâ€™t need to help them on defense, too.

How Does Offensive Tempo Affect Defensive Production in the NFL?

Even if Ezekiel Elliott Is Great, He Was an Awful Selection for the Cowboys

Ezekiel Elliott Will Be a Good NFL Running Back, But Did He Get Drafted Too Soon?