Paxton Lynch Is a Project, But He's Still a Good Fit for Denver

There's an old adage that says "nothing wagered, nothing won", and this sentiment seems to reverberate throughout the world of technological innovation. Whether you mean NASA's mission to put a person on the moon -- that tragically cost the lives of three astronauts in the Apollo 1 test -- or Bill Gates' belief that people wanted these crazy hunks of digital communication called "personal computers" in their homes and at a size that would fit on a desk, there are some marvelous design feats that the human race has pulled off in its lifetime.

One of those is the 6'7'', 244-pound mountain of tightly wound cables -- with a cannon strapped to his side and four-wheel drive underneath -- known as Memphis quarterback Paxton Lynch.

Yes, Paxton Lynch is the perfect specimen of a quarterback that every NFL head coach imagines when asked what their dream franchise signal-caller would look like: he has size, he has mobility, he has durability in his frame, and boy does he have strength.

Yeah. He does things like that. The pluses for Lynch are myriad, but almost all are under the scouting heading of "athleticism". The only We can see his MockDraftable.com spider chart below, which compares Lynch's athletic measurables from the NFL Combine to other players at his position. 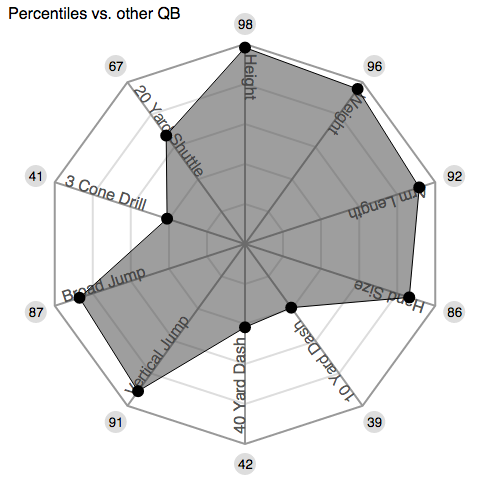 We can see that Lynch's physique is off-the-charts massive when compared to other historical quarterbacks. His agility drills don't light up one's eyes (3-cone and 20-yard shuttle), but he does have some explosiveness, as evidenced by incredibly high vertical jump and broad jump ranks (87th and 91st percentiles). This could assist in Lynch's cannon arm, downfield throwing, as it's clear that he can generate power in his lower half.

What is worrisome about Lynch are the details: he has little feel so far for anticipation on timing routes, he doesn't always place the ball well or have consistent accuracy, and there is a very notable hitch in his usually-quick throwing mechanics that prevents him from generating as much power as he should be able to when on the run. His decision-making is suspect, and he wasn't allowed to change plays at the line of scrimmage in college, which are troubling details when put in context of his very low score on the Wonderlic.

Normally I wouldn't even mention something like that, but when all of the factors align like this, it seems worth noting. He will be best used in a system that allows him quick reads and read-option chances, much like Washington's system in 2012 when it selected Robert Griffin III.

It's also important to note that Lynch progressed each year statistically in his time at Memphis as a starter. The table below shows his passing statistics for his three years in college.

This shows an incredible development track for this high-potential passer. He doubled his touchdown rate in between his freshman and sophomore years, and halved his interception rate from his sophomore to junior seasons. He also added more yards as he added volume over those three years, which is actually fairly rare, while also completing more passes every season. Lynch is a rare athlete who has one of the highest ceilings we've seen in a while.

If he can continue to debug his programming and download better software, Lynch's incredible processor power could make him a threat to NFL defenses.

For the second time in two years, the Denver Broncos decided that a trade up in the first round of the NFL Draft was the best strategy to acquire the guy they wanted on their team. This year that turned out to be Paxton Lynch. The Broncos ranked 25th in the NFL in schedule-adjusted Passing Net Expected Points (NEP) per drop back in 2015 under the guidance of veteran Peyton Manning and Brock Osweiler, but this offseason left the Broncos lacking a quality talent at quarterback.

With trades for Colin Kaepernick and Sam Bradford dead before takeoff, the Broncos have had to go through the offseason thus far with just Mark Sanchez and Trevor Siemian on their depth chart. The table below shows their 2015 Passing NEP production.

Siemian, a seventh-round selection in 2015, didn't get a chance to throw a pass in his rookie year, so he registered absolutely no NEP data. Sanchez had a year to forget in 100 passing attempts with the Philadelphia Eagles. Both will be better backups than starters, and Lynch should be the long-term franchise option for Denver. Sanchez might start at the beginning of the 2016 season to stabilize this team in-flux, but we should see Lynch step into the lineup sooner rather than later.

Even better for him, he gets to throw to Demaryius Thomas and Emmanuel Sanders, and will have C.J. Anderson toting the rock for him to keep defenses honest. This is a star-studded offense, and Lynch will benefit for that in the long-term.

I love the fit, but I hope the Broncos have the patience to let this project with potential develop into the next great Broncos' passer.

Who Will Be the 2016 Denver Broncos' Starting Quarterback?