Which Wide Receivers Will Score Fewer Touchdowns in 2016?

My golf philosophy is pretty straightforward: players should strive for competency.

No one wants to play with a golfer who slows the game down, but the average Joe probably doesn't want to be paired up with your 3 handicap, either.

Me? I generally shoot in the 90s, drink some beer, and take a nap when I get home from the course.

Every once in a while, I'll have a sub-90 round on the links. And that's because, usually, fortunate things happen -- a tee shot will hit a tree in the woods and flop onto the fairway, I'll sink a long putt, or a chip will end up dropping into the hole.

When I break 90, I'm elated, no doubt. But I also know what's going to happen next -- the next time I'm on the course, I'll probably end with a score closer to 100.

Why? Because math. The law of averages supposes most future events are likely to balance any past deviation from a presumed average. In other words, breaking 90 is great and all, but a future round of golf will see that score corrected, unless I get lessons and truly start to improve my game.

This is usually how sports work, too.

NFL players can improve through a new approach, a different mentality, or even a change in coaching. But when you look at the bigger picture -- large sample sizes -- player statistics generally revert back to their mean, or average, each season.

Take touchdowns, for example. A touchdown, compared to something like a yard, is a rare event in football. Yes, they happen each game, but the same player isn't scoring every touchdown. It's why a wide receiver catching 10 of them in a season is such a big deal.

But we know, intuitively, that this isn't the case.

This is one of the reasons why our Net Expected Points (NEP) metric is really helpful. Rather than taking touchdowns or yards and pretending they all have the same meaning, NEP looks at down-and-distance situations, associates an expected point value on that drive given that situation, and can attribute the actual number of points a player is contributing for his team. So, for instance, a gain of 10 on 3rd-and-12 isn't as impactful as a gain of 10 on 3rd-and-9. Why should it be?

For more on Net Expected Points -- and you should have a decent grasp of the idea for this particular analysis -- you can check out our  glossary.

With NEP, though, we have the true impact a player makes -- it's not a counting statistic that provides little context.

Which wideouts are most likely to regress in 2016?

To find this answer, I charted every wide receiver Reception NEP (points added on catches only) total over the last five years, comparing it to the number of touchdowns that wideout scored. That generated the following chart and trendline. 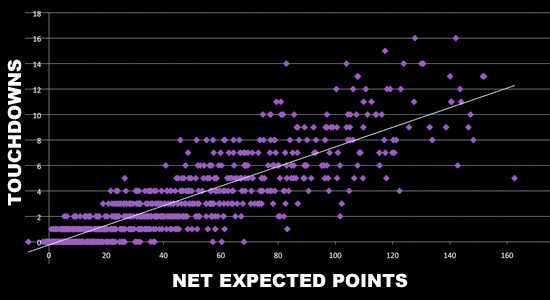 This trendline represents the number of expected touchdowns given a wide receiver's Net Expected Points score. So, if a player had a Reception NEP total of 100, we'd expect him to score nearly eight touchdowns. This makes sense -- it's tough for a wide receiver to reach that 100 Reception NEP mark, and it's difficult for a wideout to also score eight times in a season.

Does this logic work? Can we accurately project whether or not a wide receiver is going to take a dip in the touchdown column the following year given the way he performed in the current season?

At the highest level, yes -- yes we can. But there will always be the Dez Bryant's of the world who are great red zone wide receivers, so they'll almost always see their name above the line.

But take a look at the top-10 wide receivers from the 2014 that this model projected to take the biggest dip in touchdown scores in 2015:


The annoying part about this list is that almost every wide receiver saw different circumstances in 2015 versus 2014, so the cause of the touchdown data could be interpreted the wrong way. The fact is, though, many of these players, if they were in identical situations from 2014 to 2015, would have seen their touchdown numbers decrease.

The touchdowns per receptions columns are there to show more of a rate statistic, too, as players like Bryant and Kendall Wright missed some time. If you compare the ratios from one season to the next, you see a clear regression, though.

That is, of course, aside from Brandon Marshall and Odell Beckham.

Marshall ended the season with six more touchdowns than he scored with Chicago in 2014, making this Reception NEP versus touchdowns idea look foolish. But there are plenty of reasons for Marshall's maintaining of his 0.13 touchdowns per reception rate -- namely the fact that Ryan Fitzpatrick may have been a little fortunate in 2015, as shown by RotoViz's Rich Hribar.

Both Beckham and Marshall, though, could simply be studly outliers. As I said earlier, Dez Bryant consistently makes the list of players who will see their touchdowns decrease from one year to the next, but understanding the kind of player Dez Bryant is allows us to know that, well, his touchdown numbers probably won't ever be horrific as long as he's healthy. The same goes for OBJ or Brandon Marshall, who are great red zone threats.

So, according to 2015's data, which wide receivers could see a drop in touchdowns during the 2016 season?

Doug Baldwin, then, should have scored 7.75 touchdowns rather than the 14 he actually tallied in 2015. Anyone seeing this list shouldn't be surprised by seeing Baldwin at the top, as he scored 15 touchdowns in the four seasons prior to this one. Regression is going to happen.

It's going to be tough for Allen Robinson to score 14 touchdowns again next year, just because it's a difficult feat to accomplish. But there's evidence that A-Rob could simply be in that Dez Bryant tier of breaking the mold -- while he may not hit 14, I wouldn't assume he's going to score fewer than 10 as long as he continues his pace.

Robinson's teammate, Allen Hurns, is on the list as well. A key reason for both of them appearing is because Jacksonville was a pass-happy team close to the end zone -- no NFL team threw more red zone passes than the Jags this season. This is a big reason to be a little down on Blake Bortles in fantasy entering 2016 (quarterbacks, historically, have rarely had back-to-back 35 touchdown seasons) and why a player like T.J. Yeldon could end up being a great bargain. If the Jags revert back to even just a top-10 passing team in the red zone, you're looking at a lot more looks for Yeldon.

Both Jets' wide receivers are listed, and while they may not be able to reach the 26 combined touchdowns they scored in 2015, both Marshall and Eric Decker have proven to be significant red zone threats in the past. It'll be interesting to see how they're valued in fantasy football drafts, but it may not be logical to assume a massive dip in scores given their skill sets.

As for the rest of the guys on the list -- buyer beware. Assuming another 10-touchdown campaign for Ted Ginn Jr. would be foolish for a number of reasons, but even if he entered 2016 as the Panthers' top wideout, it'd make much more sense to project him for 6 touchdowns rather than 10. Michael Crabtree was hit with five more red zone targets than teammate Amari Cooper, despite being the team's number-two receiving option -- that screams regression. And Julian Edelman ended up scoring more touchdowns in nine regular season games than he did in any other season of his career.

These numbers aren't the end-all. But they can certainly be used as a general guide to touchdown regression.

And if you're curious about guys who should score more touchdowns in 2016, don't worry. We'll have that one coming soon.