Thursday Night Football Betting: What Does Our Algorithm Say About the Undermanned Packers?

Why Handcuffing Running Backs in Fantasy Football Is a Losing Strategy

Burning two roster spots for the same position is a waste of your valuable bench space on your fantasy roster. Unless the player has some stand-alone value (i.e. Ryan Mathews in Philadelphia, who's projected to receive 30% of the snaps according to Philly.com reporters), burning valuable draft equity on a player who may be held to a significantly low number of opportunities is a poor choice.

Most handcuffs are drafted as insurance for when a fantasy football owner's top draft pick faces some kind of injury. The hope is that when that top-shelf player gets injured that the "handcuff" comes in and plays at the same or near-same level.

There are several problems with this line of thinking.

To begin, you're drafting with a losing mentality by thinking your top players won't help win you a championship. That's not playing to win. That's playing not to lose. And that, my friend, does not leave you with a championship and bragging rights at the end of the season.

Secondly, this thinking assumes the backups or handcuffs are able to jump in and perform at a replacement-level performance. This flawed logic -- the handcuffs are backups, after all, and not starting for another team -- will leave you discouraged after seeing your handcuff only make a fraction of the fantasy points your former starter was producing.

Finally, when rushing duties aren't given to the lead bell cow, they are often split among a tandem of backs as the coaches try to complement their talents with each other to replace the missing piece of their offense. While this works better in a real-life football, the subsequent fantasy results are less than ideal -- especially in today's passing NFL.

What Does Recent History Tell Us?

I took a look at the top-12 running backs drafted over the last three years and their respective backups. This was gathered looking through MyFantasyLeague's ADP gathered after August 1st of each year in 12-team, PPR redraft leagues. This format offered one of the deepest lists of running backs drafted.

A few things of note before diving deep into the data. The top 12 players (sorted by preseason ADP) of each year's drafts were chosen for the study. This top tier of running backs in August are exactly the types of players generally targeted for handcuffing. The number of missed games were used to see how effective each handcuff was when provided the opportunity.

"Missed Games" were those in which the lead back played less than 20% of the offense's snaps (according to data from FootballOutsiders.com) and ran only through Week 16 for fantasy purposes. The point for this column was to include only games during which the coaching staff was forced to find a way around not being able to use their top running back.

The backups chosen to be the RB2 in the table below were determined by the highest preseason ADP on the same team. Some team's RB3's, which we'll get to later, were not drafted in fantasy leagues, and in these cases, they were determined by most snap counts on the year.

Snap percentages are taken only from the games that the RB1 did not play. The top-12 and top-24 columns are the RB2s' respective fantasy outputs under these missed games in PPR scoring.

Here's how each team's primary backup -- or handcuff -- fared when his team's lead back missed time.


The running backs drafted in the top-12 last year missed a total of 40 games. Over the past three years there have been an average of nearly 30 games missed among the top-12 drafted running backs.

Basically, 18% of the time we weren't even drafting the right guy!

The drafted RB2 handcuffs -- which again, were determined by their preseason ADP -- only saw the field for 42.8% of the team's offensive snaps when the starter was out. The RB3's were seeing the field nearly the same amount, as they averaged seeing 39.0% of the offense's snaps, emphasizing the earlier notion that coaches often utilized multiple running backs when their top players were on the shelf.

The second thing that draws your attention is the lack of top-12 and top-24 performances when the handcuffs (RB2's) were given multiple games to produce. Taking a look at each of the handcuffs that got to see at least six games in the table above -- which totaled 60 games over the past three seasons -- they ended up being incredibly mediocre. There were only 18 of the 60 games in which the RB2 was able to produce top-24 numbers.

Another thing of note was the weeks in which these handcuffs saw playing time. 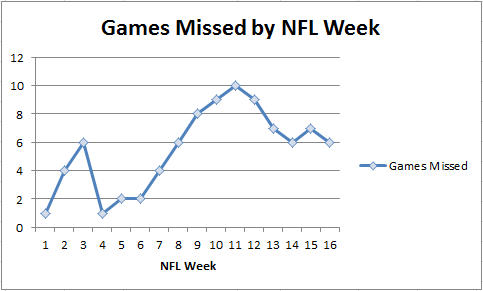 During our sample, 70% of these available weeks for handcuffs came after Week 9. Intuitively, this makes sense. As the number of touches increases throughout the season, the more likely a player is fighting the odds of exposure to injury. Injuries are not always easy to predict, but the data in this study tells us that the large majority of handcuffs won't see playing time until they've spent eight full weeks burning a hole on your bench.

If you're really rostering a handcuff for nine weeks until you're able to use him, are you going to be happy that you only have a 19.3% chance of getting a top-24 game? Are you really willing to hold a team's projected handcuff that long when other teams' RB3's are producing top-24 games at the exact same pace at a fraction of the draft day price?

I certainly am not, especially when there are plenty of alternative strategies to employ on draft day.

Getting running backs who are already schemed into the offense's game script gives you a significant advantage over rostering the backs that you're just crossing your fingers to get a chance to see the field. Know how many times a guy like Terrance West, Darren McFadden, and Chris Ivory were able to put up top-24 weeks last year? They each had five separate occasions crossing that threshold yet were drafted after the RB40 when handcuffs start to be taken. All three of these running backs were projected to enter committees entering the season, yet all were able to produce usable fantasy outings.

After the first 40 running backs being drafted according to 2015 ADP, there are plenty of options who offer higher upside than someone like a James Starks. San Diego's Danny Woodhead -- who should be able to bounce back to fantasy success -- is a prime candidate to offer weekly upside in a committee. The aforementioned Ryan Mathews should also provide plenty of value in Chip Kelly's fast-paced, run-heavy attack given that he doesn't need an injury to see snaps. There are plenty of options to find a committee and poach usable weeks based on matchups.

I use "volume" to be coy because there are plenty of receiving backs capable of finding value for your roster. Finding volume or touches is something paramount to fantasy success. From a receiving aspect Reggie Bush, Roy Helu, and Woodhead are all viable options to earn touches in the receiving game. Entering new environments has drafters apprehensive about the fantasy production from Bush and Helu, providing a discount on usable fantasy producers.

Andre Williams benefited from an injured Rashad Jennings last year, as he was able to amass 217 carries. Williams is currently being the 56th running back off the board but could turn into another bell cow if Jennings misses time in 2015. Duke Johnson has watched both Isaiah Crowell and Terrance West falter this preseason and could emerge as the lead back if he plays his cards right. Already the favorite for passing down situations, Johnson has the potential to steal early downs away from the two incumbents due to his athleticism and scheme fit.

Touchdowns can significantly sway a player's fantasy output for the week, and finding late-round prospects who can hit on this are fantasy gold. Bishop Sankey and David Cobb are both going after the 40th running back taken, but after seeing Sankey fall short of becoming any kind of red zone threat last year, Cobb could find himself in a valuable situation. Albeit on a limited sample size, Sankey was able to convert only two of 15 rushing attempts inside the red zone for scores. At his current price tag, Cobb could be the running back to own in Tennessee and see the majority of goal line looks in this new Marcus Mariota-led offense.

Darren Sproles is another running back to monitor. He was able to reach the end zone on six different occasions last year rushing the football. He was also able to hit paydirt on special teams with three returns for scores. Surprisingly, he was unable to accumulate any receiving touchdowns last year -- the first time since 2007 -- but would expect that anamoly to correct itself, as we have projected Sproles to score 1.64 receiving touchdowns in 2015.

Whether through committees or the potential to see volume or touchdowns, there are numerous other running backs who are worth taking before most handcuff options.

Recent running back handcuffs have failed to produce in the manner in which they used to. Burning draft equity on a running back who produces top-24 performances 19.3% of the time over the last three years is beyond inadvisable. Not only is this home run hit strikingly low, it's also inherently tied to the health of the starter. If that lead back makes it through the season unscathed, you've wasted a roster spot the entire year and handicapped your team's ceiling in the process.

Targeting running backs who could see more frequent playing time -- those in committees -- are a better use of your draft assets. They have a better chance to see starter's playing time if they are able to impress the coaching staff, and the only way to do that is through results on the field. Finding receiving backs who are able to get you both carries and receptions are also more advisable, but could be tied to game script. Touchdowns are the universal fantasy trump card, as more than 65% of all of last year's top-24 running backs had a touchdown to their name that particular week.

I implore you to stop drafting Christine Michael (RB65) who could easily be superseded by Robert Turbin (RB79) as one of those sneaky RB3 takeovers. Don't draft a guy like Jeremy Langford and watch him sit unused for weeks on end. Spend an upside pick on someone such as David Johnson who could split time with Andre Ellington and provide immediate fantasy value instead of spending weeks hoping a handcuff may crack your starting lineup by Week 9.

Is Chasing Running Back Performance an Efficient Fantasy Football Strategy?