Chip Kelly's Duck Hunt: Why Nelson Agholor Will Soar With the Eagles

Joseph Juan  —  @FF_Scientist Jun 4th, 2015
Share on Facebook Share on Twitter
The Philadelphia Eagles needed a replacement for Jeremy Maclin, and they went out and drafted Nelson Agholor. Will he produce during his rookie year?

Last season, Jeremy Maclin proved to the league that he was a perfect fit for Chip Kelly's fast-paced offense in Philadelphia. His Pro Bowl-worthy performance translated into 17.3 points per game in points per reception (PPR) fantasy leagues (12.0 in non-PPR), leading many owners far into the fantasy playoffs. And on the heels of a truly breakout season, Chip Kelly and fantasy football managers alike were salivating for an encore performance in 2015.

Then Maclin left for the Kansas City Chiefs.

So how does one find a replacement for the production Maclin likely won't be getting with Alex Smith and company in Kansas City? The same way Chip Kelly found Maclin's replacement on the Eagles -- with the "duck test" (and no, I'm not talking about Chip Kelly checking your resume to see if you're one of his former players from Oregon).

And as we will soon discuss, rookie wideout Nelson Agholor is not only a dead ringer for Jeremy Maclin in terms of physical build, he also has the athleticism and on-field abilities needed to fill in Maclin's highly productive role in this Eagles offense.

Getting Chip's Ducks in a Row

When Jeremy Maclin signed a five year, $55 million deal to return to his home state and reunite with his old coach Andy Reid in Kansas City, his departure left a huge dent at a critical role in the Eagles offense that Chip has spent the last two years molding into the image of his old Oregon Duck teams.

Not only did Maclin's 85 receptions and 1,318 receiving yards account for 28.8% of the Eagles' passing offense, his 111.2 Reception Net Expected Points (or NEP, a measure of a player's contributions to his team's chances of scoring above, or below, expectation) ranked him 10th in the league in this metric, and constituted an astounding 30.7% of the Eagles production through the air last year.

To say that this offense revolved around Maclin is quite an understatement.

So when the Eagles were on the clock in the first round of this year's draft -- contrary to the popular belief that Chip and the Eagles were going to send the 20th overall selection in a deal to acquire former-Oregon quarterback Marcus Mariota -- Chip instead used this coveted pick to address the void left by Maclin at receiver, selecting former-USC wideout Nelson Agholor.

And consistent with the expectations of such a highly-drafted player at a position of need on this team, recent reports out of Philadelphia's OTAs suggest that the lead wideout role has been all but handed over to the young receiver out of USC.

But does Agholor have what it takes to fill the large shoes left by Maclin in Philadelphia?

When trying to explain why Kelly has seemingly tabbed Nelson Agholor to replace Jeremy Maclin in his high-flying offense, the first place to look is at their physical attributes.

To say that Nelson Agholor resembles Jeremy Maclin is like saying Ronde Barber and Tiki Barber sort of look alike. A glance at their NFL Combine and pro day numbers reveals just how eerily similar the two wideouts are to one another.

With nearly identical size, build, and workout numbers, one could argue that Kelly used the number 20 overall pick of this year's draft a to replace Maclin with a carbon copy of himself.

What can I say? When it comes to wide receivers, clearly Chip Kelly has a type.

And as we'll soon see in the section below, these specific sets of attributes that Kelly seems to gravitate toward in his receivers is consistent with the style of play he's looking to employ in the NFL.

The uncanny resemblance between Maclin and Agholor goes well beyond just merely their measurables. As you might expect, when we compare Agholor's on-field ability to Maclin's, we see that Nelson is capable of doing everything that Maclin can and then some.

The Short-to-Intermediate Game
While not the biggest, strongest, or fastest receiver on the Eagles, Maclin became a household name in Philadelphia on the strength of his smooth route running and explosivess off the line of scrimmage that allowed him to win in the short-to-intermediate game. 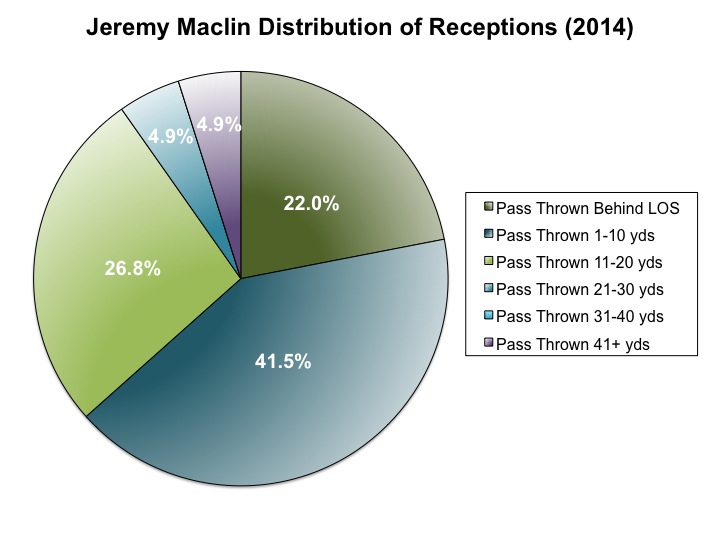 Indeed, an astounding 90.2% of Jeremy's 85 receptions came on throws flying 20 or less yards through the air, including 63.4% of these receptions coming from passes thrown within 10 yards of the line of scrimmage.

And it is this particular skill set that is key for the success of Chip Kelly's quick-hitting offense, which relies on the ability of receivers to excel in the short and intermediate passing game to maintain a breakneck pace and keep the pressure on opposing defenses.

As his 10-yard splits from the Combine would suggest, the first thing you notice when watching Agholor play is that, just like Maclin, he too has the short-area speed and suddenness off the line to succeed in this area of the field.

Similar to Jeremy, Nelson also uses his athleticism and change-of-direction ability to break defender's ankles with vicious double-moves. Indeed, we see on this play by Maclin and on this one by Agholor, that both receivers can use their agility to spin opposing corners around.

Beyond this, the elusiveness that Maclin has demonstrated in close quarters that makes him deadly in the screen game also seems to come as a natural part of Agholor's game. Agholor puts his explosiveness to use after the catch which, alongside his instincts, smooth running, and impeccable timing, allows him to dance his way around helpless defenders.

And just like Maclin, Agholor is more than just a quick pair of feet, he also has great hands to match. Both athletes play the ball aggressively when it's in the air, and Maclin and Agholor have demonstrated the ability to rise up and snatch the ball out of the air such as on this play by Jeremy, as well as this play and these ones by Nelson.

But beyond this, Agholor brings to the table a valuable set of skills that his predecessor lacked. His experience in the slot at USC already has Chip describing him as an "inside, outside" type of player, which should give this team the on-field flexibility needed to keep the Eagles offense clicking at the same high tempo Nelson grew accustomed to at USC under coach Steve Sarkisian.

The Long Ball
While neither Maclin nor Agholor have record-breaking speed, their mid-4.4 40-yard dash times are nothing to sneeze at. And when coupled with their excellent abilities to track the ball over their shoulders and fancy footwork near the line, this speed allows both Agholor and Maclin to exploit lapses in coverage to beat defenses deep.

And on this note, out of the eight receptions Maclin received which traveled greater than 21 yards through the air, five of these went for touchdowns. Not to be outdone in the deep ball department, when playing strictly as an outside receiver during his first two years at USC, Agholor managed to average 18.9 and 16.4 yards per catch during his freshman and sophomore seasons, respectively.

But what impresses me the most about Agholor's deep game is the urgency with which he runs when he has the ball in his hands. While Maclin himself is a pleasure to watch when he has the rock and nothing but daylight in front of him, Agholor runs with that determined style that says nothing is going to catch him on his way to the end zone.

From the analysis above, it becomes clear to you and me that Agholor not only has both the physical build and athletic ability necessary to assume the role that Maclin held in Chip's offense in Philadelphia, but also, given the immense opportunity in front of him, has a chance to excel as a rookie at the position.

...Then It's Probably an Eagle

Historically, rookie wideouts have been far from a sure thing in fantasy football. However, those that have succeeded in their inaugural year were those whose skill sets married perfectly with their team's needs and who also were given a clear route to playing time.

As we have just discussed, as a near identical copy of Jeremy Maclin and on a team in serious need at wide receiver, Agholor finds himself in the perfect situation to contend as this year's most productive rookie wideout. And with a current ADP of 119 according to FantasyPros.com, Nelson gives fantasy football owners the type of low-risk, high-reward option that can transform a team into a legitimate title contender.