NFL Draft Betting: Who Will Be the First Offensive Lineman Selected?

Jim Sannes  —  @JimSannes Mar 11th, 2021
Share on Facebook Share on Twitter
Rashawn Slater has gotten plenty of buzz recently, and he put down impressive numbers at his pro day. Should we bet slater to be the first lineman selected in the 2021 NFL draft, ahead of Penei Sewell?

The race to be the first offensive lineman selected in the 2021 NFL draft appears to be a two-horse show right now. Penei Sewell versus Rashawn Slater has been a bubbling issue throughout the early stages of the draft process, and it's one that figures to last all the way until the end of April.

But as of right now, this two-horse race is being treated like a blowout.

FanDuel Sportsbook has odds posted for who will be the first offensive lineman off the board. They've clearly zeroed in on Sewell and Slater, but they don't view this as being a competition.

The implied odds on Sewell are 91.3% compared to 22.7% for Sewell. Clearly, the juice here is rough if you view Sewell as being the slam-dunk favorite, and the number on him is prohibitive enough to cross him off the list.

But is there enough smoke for us to take the plunge on Slater?

He certainly helped his case at his pro day earlier this week.

As we saw when trying to bet on the big men last year, workout numbers do correlate to draft slot. For tackles, the key ones to focus on are the 40-yard dash, three-cone, and shuttle. Slater's shuttle time was never officially reported, but the 40 time and three-cone were both what you want.

After adjusting for weight, here's how Slater's marks in those departments compare to first-round tackles who have worked out at the combine since 2010. In this instance, a mark of 100 would be exactly the expectation for a player at that weight with a higher number being better than average and a lower number being worse. Because pro day times tend to be faster than those at the combine, we'll use Slater's slower 40 time in this spot.

Slater checks the athleticism box. His 33 bench reps would rank seventh among all tackles since 2010 had he done it at the combine instead of a pro day.

This keeps hope alive for Slater at +340. But we already know he's a likely first-round pick. The question is whether he can leap-frog Sewell.

Sewell holds the edge based on mock drafts. Over at Grinding The Mocks, you can search their database to get a consensus of what mock drafts are saying. In looking at expert mocks, Sewell's average draft slot is 4.7 compared to Slater at 13.2. Tied for third are Alijah Vera-Tucker and Christian Darrisaw at 18.5. Those numbers line up well with the odds.

That gap isn't what it once was, though. Also at Grinding the Mocks, you can view change in stock over time. Sewell has been near the top all along whereas Slater's surge came toward the end of 2020. 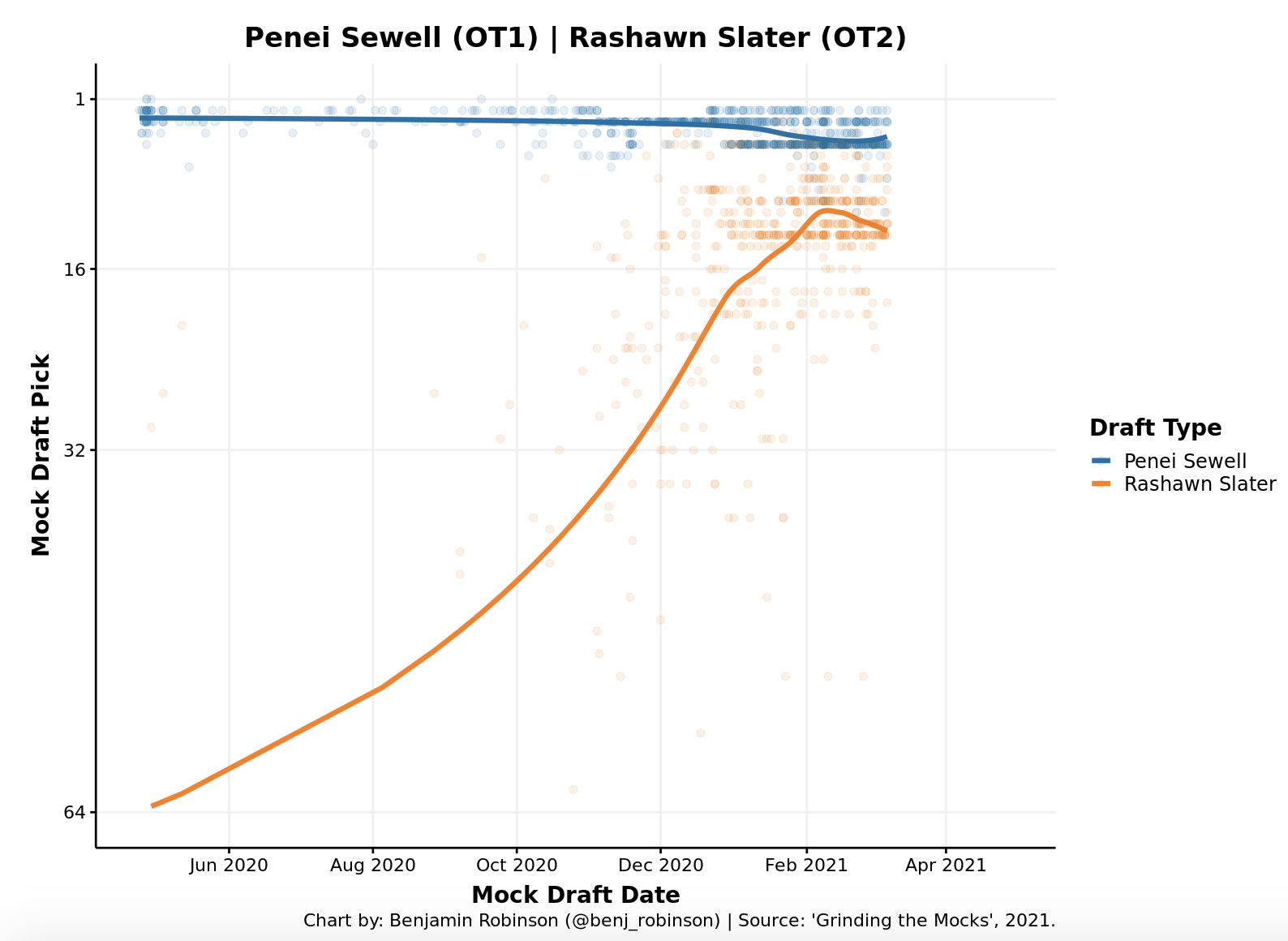 This keeps the window open for betting Slater, especially if you think his pro day can rejuvenate the conversation.

Because of this, it makes sense to dive into recent individual mock drafts by tapped-in analysts to see what they have been saying.

Here's a look at that for the most recent mocks by Todd McShay, Mel Kiper Jr., and Daniel Jeremiah. McShay's is the most recent, having come out last Friday.

All three mocks had Sewell going to the Cincinnati Bengals at fifth overall with Slater being the second lineman selected.

The lingering question there is whether Sewell is being mocked to the Bengals as a result of insider knowledge of their preference between the two or if he goes there because he's projected as the top lineman. The latter would give us leeway to bet Slater while the former would make that tough.

After digesting all the data, we've got two options: either bet Slater or stay away completely. There's enough uncertainty at this point to avoid laying -1050 on Sewell, taking that off the board, but the other two are both defensible.

For me, I want to exploit that uncertainty. We still have a month and a half until the draft, and Oregon's pro day isn't until April 2nd. We also haven't seen many mocks since we got confirmation of Slater's athleticism. So if I'm going to dive into this market, I'd want to do so now before we see any adjustment to how the consensus views Slater.

If you're not comfortable taking the plunge on Slater, this seems like an easy stayaway. A legitimate third option hasn't appeared yet, and once they do, we'll likely still be able to get them at a favorable number for a while. At least for the time being, this market is Slater or bust.

Which Quarterback in the 2021 NFL Draft Class Is Statistically Superior?

NFL Draft Betting: Who Will Be the First Wide Receiver Selected?