People don’t like to take risks whenever possible. Whether it’s simply choosing to walk across a street when the light says so or deciding to look for a rope bridge to the ancient cavern that’s not so rotten and rickety, we are creatures of comfort. It’s a survival instinct, and that survival instinct has allowed us to thrive as a species for hundreds of thousands of years.

It’s no wonder, then, that fantasy managers are looking at the Chicago Bears’ offense and backing away slowly while keeping eye contact with it. Easy does it, little guy, we mutter under our breaths, dancing the torch in between us as we shuffle calmly but confidently down a different passageway.

No part of the Bears’ passing offense is appealing on the surface for fantasy purposes, but there’s a lot in there once you knock the cobwebs off and take a look around. Perhaps the advent of Nick Foles is a new chapter for the value of this team’s pass-catchers. Perhaps the running back injuries will lead to more focus on the aerial assault. Perhaps the fact that Chicago drafted no receivers in 2020 is an excellent tell-tale for the fantasy fortunes of the current receivers.

Should we be bullish on the fantasy outlooks for Allen Robinson and Anthony Miller in 2020?

2017 second overall pick Mitchell Trubisky has been awful since entering the league. This offseason, the team traded for veteran journeyman and eternal symbol that your starting passer is in trouble somehow, Nick Foles – and the skill sets of the two could not be more different. Trubisky has a popgun for an arm, but can make up ground, extend plays, and find windows using his legs; Foles is a statue in the pocket but has a cannon for an arm.

To this point, just a few days away from NFL kickoff, the Bears haven’t decided who will start the season for them. But despite their vastly different strengths, Trubisky and Foles have surprisingly similar passing tendencies. The graphs below show the allocation of targets by position for each of the quarterbacks since 2016 (note: Trubisky was drafted in 2017, but we needed a more meaningful sample size for Foles). 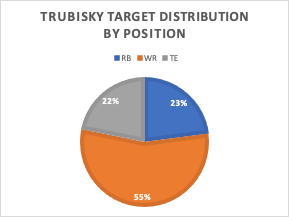 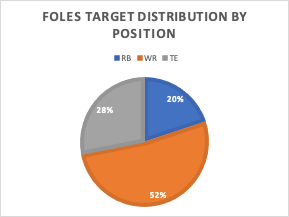 The only meaningful difference in the dispersal of targets between these two is the focus on the tight end position by Foles. Still, that can largely be explained due to the fact that he played the 2017 and 2018 seasons with star and target-hog Zach Ertz as his TE1.

When we break down per-game targets by position and depth chart position for each quarterback, you can actually see this effect in place. 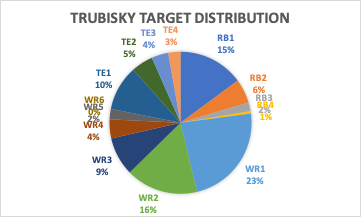 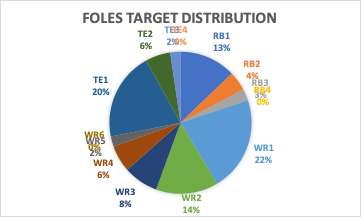 Most of the main spots have roughly similar rates of targeting, but Foles has pinched off a bit here and there from others to feed his TE1 at double the rate Trubisky has. When we halve Foles' TE1 targets, his WR1 receives a 24% target share, his WR2 a 16%, his WR3, 9%, and his RB1 14%. They’re basically the same guy in terms of where they dish the volume out.

The major difference is that Foles has tended to use his WR1 – his most frequently targeted receiver in a game – in more of a short, possession role (8.5-yard average depth of target, or aDOT), while his WR2 and WR3 are downfield stretchers (14.6- and 12.4-yard aDOTs, respectively). Trubisky, on the other hand, has had much higher aDOTs for all his receivers, even his more slot-esque WR2 role (10.1-yard aDOT).

If the offense changes at all with Foles under center, it will be from a slight increase in completion rate (meaning slightly more value for PPR targets) and a hair more touchdown efficiency. That value may also coalesce in one highly targeted receiver more than others, but the lack of other receiving options keeps the floor higher for the WR2 and WR3 in the offense.

If the quarterback is the engine that powers the fantasy machine on a team, the receivers are the wheels that actually make things move. More wheels on the vehicle means more power needed to turn them all, or else the power will be split between the wheels and each wheel will have diminished individual importance.

While this analogy is pretty accurate for football, I’m not sure it’s how cars work, so I’m going to abandon it here.

Put plainly, no meaningful added target competition is the big boon for Robinson and Miller. The table below shows the Bears’ additions this year, whether via the NFL Draft or free agency, and the market share of targets they commanded on their previous teams (note: the asterisk indicates a college team, and the caret indicates a non-Power Five conference team).

Perhaps the most impactful 2020 addition would be tight end Jimmy Graham, but he is entering his age-34 season and has seen diminished use and effectiveness in recent years. Graham couldn’t even muster more than an 11.5 percent target share on a team whose receiving corps was as threadbare as the last few iterations of the Green Bay Packers. Wideout Ted Ginn Jr. should end up in a starting role in three-wide sets, but he may end up as the third receiver and primarily a low volume, field-stretching role.

Rookie tight end Cole Kmet should be a useful fantasy player in the future, but rookie tight ends are notoriously poor fantasy options. Fellow rookie Darnell Mooney is making a much larger leap in level of competition than other first-year players, so he’s not likely to splash either.

Given that the Bears are favorites in just six games this season (and favored by no more than 5 points in any game), it’s entirely possible the passing volume will increase and raise everyone’s fantasy value even more. On the higher end, the projected target shares for Robinson and Miller could lend themselves to 10- and 7-target games on average when the Bears need to throw. In addition, should Chicago need to play catch-up, Tarik Cohen and Jimmy Graham’s target shares may end up lower than expected due to them pushing the ball downfield into receivers’ hands.

I may be slightly less bullish on their average outcomes, but Robinson is being drafted as only a late third-round pick by BestBall10s ADP, while Miller is going off the board as the WR51. I feel comfortable taking them at those values, given the volume upside both possess in this still-settling depth chart on a team that should need to pass a fair amount with a completely mediocre morass behind them.

Robinson and Miller may not be the most attractive fantasy options in 2020, but there is value to be had for them this year, and they are both worthwhile at their draft positions.