The term "league winner" has been loosely thrown around fantasy football circles for years.

But what the hell does it even mean?

Sure, sure -- we can intuitively understand the term. A league-winning player is one who...helps you win your league. Easy enough.

How do we define that, though? And, more importantly, how easy is it to acquire one? What are your odds of finding a league-winning player at a particular point in your draft?

Is a league-winning player one who outscores the rest of his position by a whole lot of fantasy points? Was Christian McCaffrey the only running back league winner last year? Are we looking at players who were really, really good, but maybe not elite? Like D.J. Chark in 2019?

How do we define this incredibly vague term?

We know player value in fantasy football is derived from a player far outperforming his positional peers in fantasy points scored. This is the basis of Value Based Drafting. If Dalvin Cook does way better than a baseline player at his position, then he's giving his fantasy teams a whole lot of value.

The issue when setting "league winner" parameters is the simple question of, "How much?" How much does Dalvin Cook have to outperform his position to be called a league-winning player?

One way to answer this is to look at historical results.

What this chart shows is the average running back and wide receiver (we'll ignore the lower-in-demand tight end and quarterback positions in order to make things less complicated) points per game averages (PPR) by rank over the last nine years. So, since 2011, the RB1 in points per game has averaged 24.6 fantasy points. The WR19 in points per game has averaged 14.7 points. And, for the record, this is among players with at least seven games played. Why seven? It's arbitrary, but it includes about half of the fantasy football season. If we looked only at cumulative numbers, we may not capture the league-winning players who were injured at some point in the season. In the end, injured players can still give you a ton of usable and elite performances.

To reiterate, we're looking for players who are outperforming the rest of their position by a wide margin. So, looking at the chart above, where does that happen?

What we're looking for when finding league winners is where the difference from one rank to the next starts to flatten. 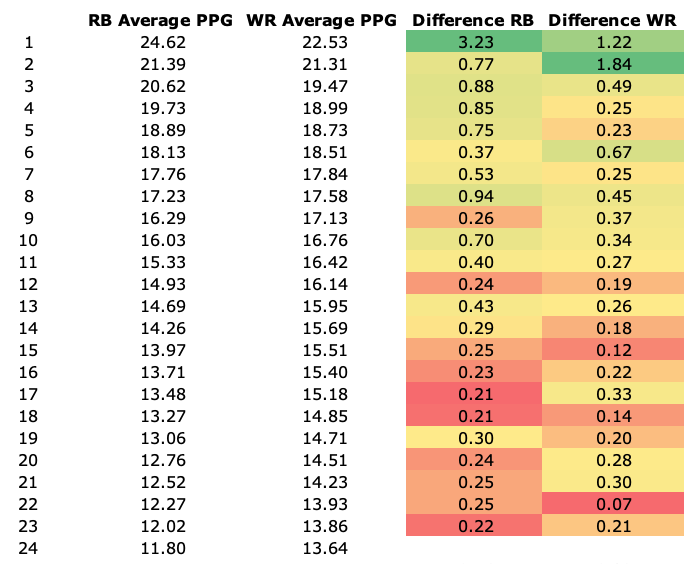 Color-coding, for the win.

Visually -- thanks to these beautiful colors -- you can see that things begin to flatten at running back around RB10 or 11. At wide receiver, it's a little less obvious (the top wide receivers aren't giving you as much of an edge in fantasy points scored as the top running backs), but there's a dip around the same mark.

This is effectively where the league winner divide is.

Let's be a little more scientific than that, though. Among the top-24 players above, the average difference from one player to the next at running back is 0.56 points per game, while at wide receiver, it's 0.39. After the RB10, we get a lot of consecutive "differences" that are lower than that 0.56 mean. In other words, things clearly flatten after RB10.

The same can be said at WR8.

These are our league-winning players: the guys who have finished as top-10 running backs and top-8 wide receivers in points per game through the years.

Where Do They Come From?

Now that we've defined what a league winner is -- and, trust me, that took longer than I wanted it to as well -- it's time to find where these players are coming from. No, I'm not talking about their hometown or how babies are made.

Where do these players typically get selected in fantasy football drafts?

According to My Fantasy League's average draft position data, as you'd guess, the majority of these players were picked early in fantasy drafts.

A solid 89% of league-winning wide receivers over the last nine years have been selected in the first five rounds of 12-team league drafts. That number is just a little over 73% at running back.

Digging deeper into this data, here's a breakdown of each position by round.

We've seen an identical number of wide receivers drafted in Round 2 become league winners when compared to Round 1. And it looks like things really drop off after Round 3 for running backs.

Quickly, let's take a look at the big group of league-winners after Round 5 to see where they're typically drafted.

Your chance of finding a league-winning running back is a lot higher in the double-digit rounds than it is at wide receiver. That's the big takeaway with the later-round players.

Looking at the Odds

We shouldn't confuse the exercise we just walked through with hit rates.

But what if I told you that 45 wide receivers over the last nine years have been selected in Round 2 (Picks 13 through 24), while 28 of them have gone in Round 1 (Picks 1 through 12)? Wouldn't that make you feel a little differently?

Since we're talking about wide receivers, here's a look at the league winner hit rate at the position by round.

Looks a little different, doesn't it?

Those chances are still decent in Round 2, and then we see a giant drop into Round 3. The odds of finding a league-winning wide receiver is actually pretty similar from Round 3 to Round 5, which tells us that drafting Round 3 wide receivers has traditionally been a not-so-great investment.

That's especially true when you compare this hit rate to the running back position.

Last week, yours truly published an article on Lamar Jackson and whether or not he'll end up breaking the late-round quarterback draft strategy. A huge portion of that piece was dedicated to opportunity cost, which is arguably the most important concept to fantasy football drafts.

Focusing on the third round with these two charts makes opportunity cost pretty clear. You're extracting value at the running back position when taking one in Round 3 versus going with a wide receiver. If your sole goal is to draft a league-winning player, you should draft a running back with your third pick as opposed to a wide receiver.

All the while, a huge drop-off in hit rate at running back occurs after that third round.

Now, this data is also showing us that our ability to find league-winning wide receivers is greater than it is at running back in each of the first two rounds. This doesn't mean that we should automatically draft a wide receiver in those two rounds, though. You can, but there's more to it than this binary way of looking at league-winning players.

Top running backs, as you can see in the colorful points per game table above, are still providing a more dramatic point edge versus the rest of their position than wide receivers are. In other words, having a league-winning running back is more powerful than having a league-winning wide receiver. And since your odds of getting that player are still substantially higher in the early rounds than the middle ones at the position, going running back early makes a ton of sense.

And, clearly, an individual player can skew these numbers a bit. As an example, over this time period, we've seen nine instances where a wide receiver was drafted in the top six, or the top half of the first round. Eight of those nine ended up being a league-winning wide receiver. But four of those eight -- half of the league winners -- were Antonio Brown.

Don't buy this while ignoring the player you're selecting.

The numbers above tell us -- yell at us -- that it's hard to find league-winning players outside the top few rounds of your draft. That's especially true at wide receiver, where only 11% of league-winning players at the position have been drafted past Round 5 since 2011. That definitely helps out those of you going with a Zero RB approach.

The data also sheds light to the concept of opportunity cost. And that, to me, is the biggest takeaway.

That changes the cost to acquire players. It's why the late-round quarterback strategy exists in the first place. If you can get usable players late, then there's less reason to draft one early.

And, clearly, given these numbers, "early" should be defined as, at least, the first two rounds of drafts. And because of the running back position's league-winning hit rate in Round 3, we should probably be treating the first three rounds of drafts as our time to ignore the less-in-demand positions. To pound running backs and wide receivers.

Once you hit Round 4, anything's game.