Denzel Mims Can Be an Immediate Contributor in Fantasy Football

The 2020 receiver class has long been hyped as an excellent group, and Denzel Mims is one of the many wideouts in this draft who could wind up being an impactful player in fantasy football.

Mims was chosen early in the second round by the New York Jets, landing in a great situation.

What are the Jets getting, and what can we expect from Mims in fantasy?

Every year there are a couple dudes who go to Indy and light the combine on fire. Mims was one such player this year.

I mean, fella balled out. 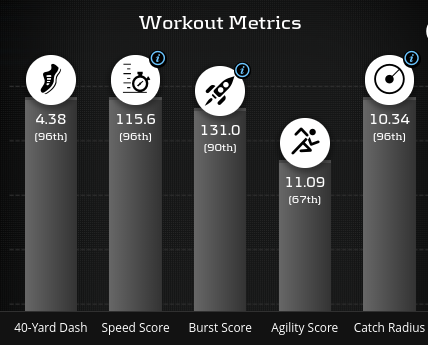 Per the numbers at PlayerProfiler, Mims' speed at his size (6-foot-3, 207 pounds) is rare, and his catch radius is also elite. He's not just a Spandex all-star, though, as his college dominator rating sits in the 86th percentile while his breakout age is respectable (67th percentile).

The solid production and silly-good combine results make him a very enticing prospect.

There are some flaws, however. We know receivers who declare early have a better hit rate than those who don't, and Mims was a four-year player at Baylor. Mims also doesn't jump off the page in terms of on-field stats, though they're not terrible by any means. His breakout age of 19.9 is fine, but it's not that great, either. Those things mean Mims isn't going to be beloved by those who prospect through analytics.

The combine matters, though, and so does draft stock.

Our JJ Zachariason compared Mims to D.J. Chark, a prospect with good-not-great college production who torched the combine and then went in Round 2. That's Mims.

Like most players outside of the elite tier, Mims has some things going for him, but he carries some risk, too.

In redraft formats, Mims is more of a fringe player, but he's one we need to have on our radar as the Jets don't have a fearsome depth chart at receiver.

Mims is a much bigger factor in dynasty leagues as he's part of a large second tier of receivers (after CeeDee Lamb and Jerry Jeudy) alongside Henry Ruggs, Jalen Reagor, Tee Higgins, Justin Jefferson, and Laviska Shenault. That group currently occupies spots eight through 13 in DLF's rookie ADP -- at least before the draft.

Landing spots will likely shake up that receiver group a bit. For me, Mims is near the top of said group and is one of the big winners from the draft. Zachariason projects Mims for 52 receptions, 750 yards and 4.1 touchdowns in 2020.