Jason Schandl  —  @JasonSchandl May 21st, 2019
Share on Facebook Share on Twitter
A safe bet to throw for a hefty yardage total, Roethlisberger's chances of leading the league in touchdowns are being grossly underrated by oddsmakers.

With quarterbacks being the most high-profile position in a league that depends on the passing game more than maybe anything else, it's no surprise that some of the first player props available on FanDuel Sportsbook this offseason are about quarterbacks.

Lines have been set for 35 different quarterbacks to be the regular season leader in passing touchdowns as well as in passing yards. Some of these are complete Hail Mary long-shots (like Daniel Jones at 500/1 to lead the league in passing yards), but considering no player is priced better than +360 in either category (Patrick Mahomes paces the group for both), you can look at a pretty broad group of players for each bet.

If we take the 16 passers with an implied probability (based on those betting lines) of at least 2.5% to lead the league in passing touchdowns, here's how they stack up for each bet.

Now, to find betting value here, I'm going to be operating under the premise that passing touchdowns are much less predictable than yards. This isn't a surprising revelation, since a single touchdown plus or minus changes a total by a lot more than a single yard (or even a single pass attempt worth of yards) can change a yardage total. The trend also readily reveals itself in the data, and TJ Hernandez of 4for4 has a great piece showing that whether you're looking at a per-game or per-season basis, yardage is much more stable than touchdowns.

There are a couple of other important trends to know here. First is that passing yards and passing touchdowns are strongly correlated in any given season (again, probably not a surprise), as shown here with a look at all the passing seasons with at least 200 attempts over the last five seasons. 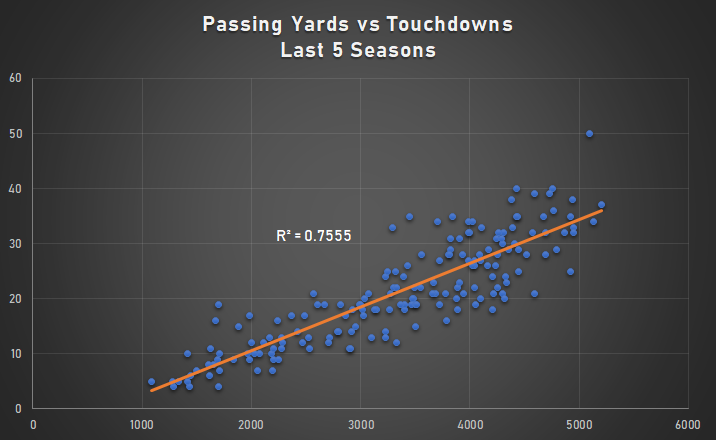 And with those strongly-correlated stats, we can use the yardage numbers to get a rough estimation of how many touchdowns a quarterback "should have" thrown in a given season. Their touchdowns above or below expectation then are just a measure how far above or below they are from that trendline.

The second thing to note is that there is absolutely no consistency in how far a quarterback finishes from that expected total. Using that same group of passers, here's how their variation from the expected touchdown total correlates from one year to the next. 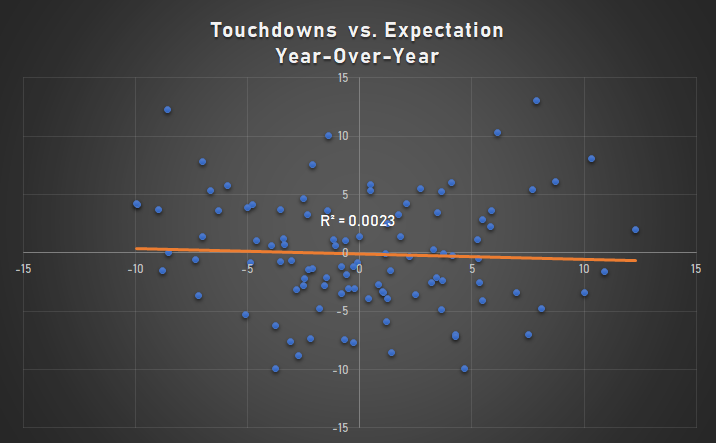 Those numbers are so un-correlated that the distribution looks almost made up. If there's a specific skill to throwing touchdowns, there's nothing in this data to show that it's at all a separate skill from throwing for yards.

With this knowledge, we can lean on yards to help us predict future touchdowns, and we don't need to be at all concerned with whether a quarterback has over- or under-performed their expected touchdown total in the past.

What this comparison means for our betting purposes here is that accurately priced lines should have little to no difference between a quarterback's odds to lead the league in yards or touchdowns. But as you can see in the chart at the top of the article, there are some serious discrepancies. Since yards are easier to predict, I'm more interested in the quarterbacks who are under-priced in the touchdown prop.

In that group, we have seven passers who have a higher implied probability to lead the league in passing yards than in touchdowns.

This is not a close race, with Ben Roethlisberger's differential sitting almost five-times higher than any other passer. The 2018 leader in passing yards, Roethlisberger looks to have a great chance to rack up another big yardage total as suggested by both the betting line and the year-over-year consistency of passing yards.

He is perhaps under-priced because he threw 1.19 touchdowns below what we'd expect relative to his 5,129 passing yards in 2018, but as I said, that measure is not remotely consistent year to year. In 2017, he threw 0.26 below expectation, and in 2016, he more than made up for those two years in the other direction with 4.16 above expectation.

The 18/1 odds leave Roethlisberger implied as only the ninth-highest passer to lead the league in touchdowns this year. With what we know about how volatile touchdown numbers are and how likely he is to rack up a hefty yardage total, those odds are an absolute steal.