We are reaching peak holiday season, which is both great and sad at the same time -- it's nearly the end of most fantasy leagues, which means it's the last installation of the regression candidates column. With only two weeks left in the regular season, there have been plenty of ups and downs. We've seen some truly great and not-so-great performances.

Clever fantasy football owners are looking for opportunities to buy low and sell high on potentially unsustainable performances. By detailing both negative and positive regression candidates, the hope is that we will uncover some of the truths behind what we've seen this year.

In one of the wackiest semi-final weeks in fantasy football history, Matt Ryan was this week's top quarterback after throwing for 231 yards and 2 touchdowns, while adding a rushing score to his resume. Not a bad week, right?

Well, let's peep what's really going on behind the scenes. Over his last three games, Ryan has only thrown for a combined 624 passing yards. While he has still thrown for over 4,300 yards this year, Ryan's problem runs deeper than just the last few weeks. Over his last six games played, Ryan has posted a Passing Net Expected Points (NEP) per drop back mark of only 0.10 -- far below his season-long mark of 0.23. That would place him 19th among quarterbacks over a full season.

While last week was a fantastic performance, Ryan could continue backsliding this week against the Carolina Panthers.

Another major shocker in Week 15 was the upset of the Philadelphia Eagles at the Los Angeles Rams, who were heavy underdogs in this game. In winning that contest, they owe a large part of it to Wendell Smallwood.

While the running back had only four carries in his previous two games, he burst onto the scene with two rushing touchdowns as the Eagles pulled away in the second half.

But a repeat performance seems unlikely -- Josh Adams led the way with 24 snaps, although he did leave with an injury, and Smallwood recorded 20 snaps along with Darren Sproles. Regardless, scoring twice on only 10 rushing attempts is hard to sustain.

The Eagles also face a Houston Texans team that's allowed only 88.3 rushing yards per game, fourth-best in the NFL. Monitor the Adams situation, but Smallwood's touchdowns may come back to earth a bit.

Mike Williams blasted his way to a huge performance last week, grabbing two touchdown passes and contributing a rushing touchdown after Keenan Allen left with a hip injury. So, is this going to keep up?

It looks like it could have been just a one week blip. Allen could be back in the picture for this contest, and even with him out, Williams didn't lead his team in targets -- Tyrell Williams did with 12. Melvin Gordon and Austin Ekeler could also be back in the lineup, which overhauls the offensive attack completely.

The Chargers face the Baltimore Ravens, who have a ferocious pass defense -- by our metrics, they have the league's best passing defense, and they've allowed the third-fewest passing yards in the league.

Yup, tight end has been a bit of a wasteland this year in fantasy football.

In Week 15, Garrett Celek did his part, catching 2 passes for 61 yards and a score, clocking in as the TE2. That makes you take heed at such a tough-to-roster position.

But it really was the result of one big passing play. Celek owns only five catches this year, and the San Francisco 49ers will take on the Chicago Bears this week, who rank third in passing defense and have allowed the 10th-fewest fantasy points to opposing tight ends.

It's definitely hard to find consistency at this position week in and week out, but Celek doesn't look like a solid play moving forward.

Over the last four weeks, in terms of fantasy points per game, Josh Allen ranks as QB2 (22.04 points per game). His rushing prowess has certainly propelled him up the ranks, as he racked up 99-plus yards in three straight contests before last week's 16-yard effort.

But Allen showed in Week 15 that while there isn't a pile of passing volume, it's still very valuable. Last week, Allen led the league in deep passes (throws traveling 16-plus yards) with 12, and he connected on 6 of those throws.

The rushing floor makes Allen interesting, and when facing a mediocre New England Patriots passing defense, which checks in at 16th per our metrics, the upside is certainly there.

While he ranks as only the RB18 this season, over the past few weeks, it has become clear that Chris Carson is the alpha dog in the Seattle Seahawks backfield, and he could creep into RB1 territory soon.

Over the last four weeks, Carson has the fourth-most rushing attempts in the league, and in Week 15 he showcased 28 total touches, including a career-high 6 catches, on his way to 148 all-purpose yards. All of that came against the league's 12th-ranked rushing defense. This week? The Kansas City Chiefs, who rank dead last in rushing defense in 2018.

Fold in a healthy 25.25 implied team total, and Carson seems in line for a big workload this week as the 'Hawks try to solidify their playoff spot.

The Denver Broncos certainly haven't been the most efficient passing offense this season -- with Emmanuel Sanders injured and Demaryius Thomas traded to Houston, the 18th-ranked passing attack certainly looks quite a bit different.

But we should take notice of what DaeSean Hamilton has been doing on the field. Last week, he was tied for second in all of football with 12 targets, posting a solid 25.0% target market share, and his 23.33% target market share over the last two weeks indicates he's definitely an integral part of the offense.

Next up is a juicy matchup with the Oakland Raiders, who have allowed a league-worst 32 passing touchdowns this season.

Despite getting drubbed at the hands of the Tennessee Titans last week, the New York Giants' offense had been clicking along at a pretty healthy clip before throwing up a goose egg.

One of the biggest contributors has been Evan Engram, especially with Odell Beckham injured the last few weeks. 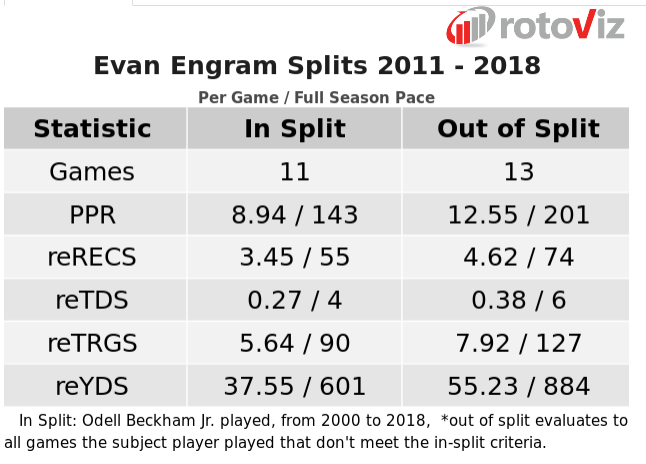 Engram led the Giants in targets (12) in Week 15, and he's essentially functioned as a wide receiver with Beckham out. If the star pass-catcher can't play this week, Engram could see a pile of passing volume.

The Giants are big underdogs yet again in Week 16 at the Indianapolis Colts, which could be good news for Engram, as the Colts rank 24th in passing defense per our metrics. Peep the Beckham situation this week, but if he's out, Engram could continue his ascent up the fantasy ranks.