3 Questions to Ask Before Selecting Your Fantasy Football Keeper

It's not, like, some complex thing that you need a PhD to do, but the solution as to who you should keep isn't always completely straightforward. Not only can keeper rules be a little funky, but properly valuing players can be tough, too.

Since we're approaching that time of year where your keepers have to be set, let's take a look at three questions you should be asking in order to optimize your selections.

1. Who would you be drafting instead of the keeper?

Opportunity cost is defined as, "the loss of potential gain from other alternatives when one alternative is chosen." Anytime you make a choice, the things you didn't choose are effectively your opportunity cost.

You can't lose sight of this concept when selecting a keeper.

Since keeper rules fluctuate so much from league to league -- some leagues use each keeper as a first-round pick for the following season, some allow players to be kept at their previous season's draft cost, and so on -- it's impossible to make a blanket statement about the type of opportunity cost you'll see in your specific league. If, for instance, you're debating if you should keep Devonta Freeman for an early second-round pick or not, that second round may feature the typical players being drafted there in redraft leagues, or there may be worse players depending on the number of guys being kept in your league.

The opportunity cost -- what you're choosing to forgo by keeping Devonta Freeman -- can be wildly different from league to league.

So, naturally, an easy way to decide if you want to keep Freeman or not is to look at who you'd potentially be drafting at that spot instead. Freeman's average draft cost, per Fantasy Football Calculator, is in the middle of the second round. In other words, if you were to decide to keep Freeman, at face value, you wouldn't be getting any sort of edge in cost. You'd be keeping him for an early second-round pick, when his average draft position (ADP) is in the middle of the second round.

That doesn't mean he automatically shouldn't be kept. If your alternatives in the second round aren't Devonta Freeman-esque, then why would you give up the chance of keeping Freeman? If your top choice in the second round, thanks to your keeper rules, would be someone like Rashaad Penny, then you'd want to use that pick on Freeman instead.

Yes, this is insanely intuitive. But, yes, it's still something that people don't think about when selecting their keepers.

2. What type of cost savings is your keeper generating?

When those two players have different prices associated with them, it can be tough to know which one is giving you the better advantage. Is Todd Gurley in the late-first round a better keeper than Chris Hogan in the 15th? How do you decide between the two? 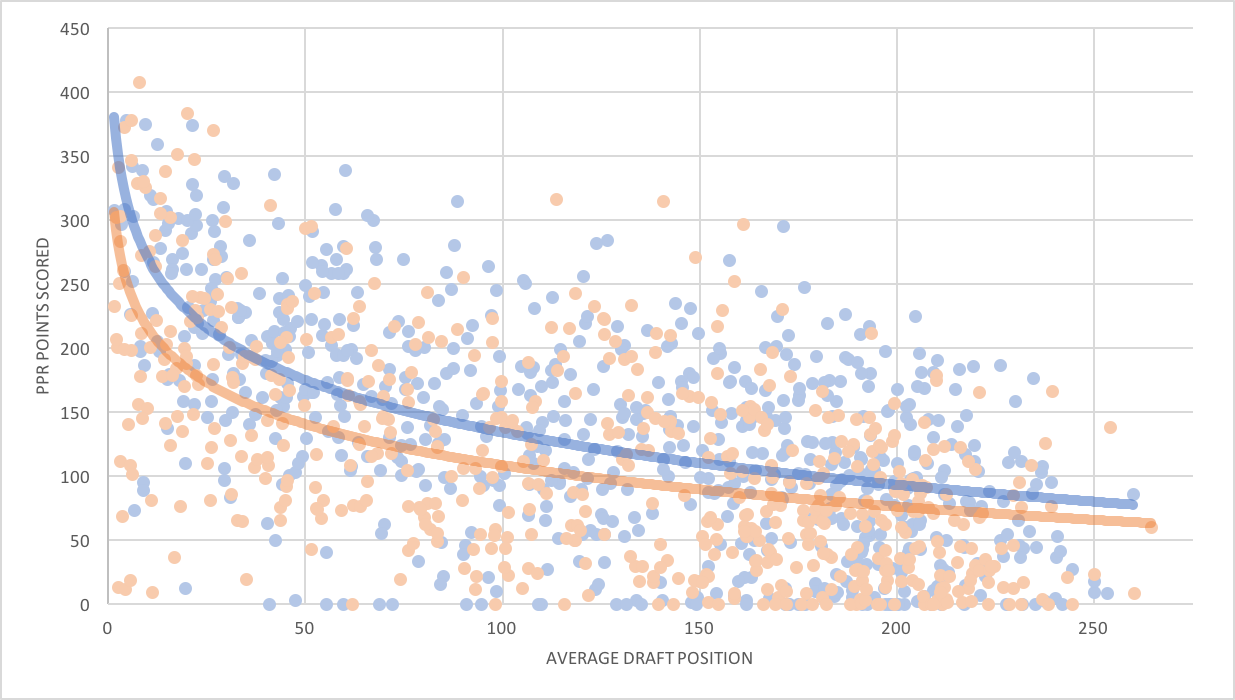 The scatterplot above is showing average draft position (x-axis) versus PPR points scored (y-axis) over the last seven seasons at running back (orange) and wide receiver (blue). The trendlines are describing expectation -- the expected point values we'd see at a particular draft slot, per position.

In a perfect world, we could use historical ADP to help make these keeper decisions for us. If, for instance, you could keep Gurley for a 50th overall pick, and you're expecting Gurley to score 300 points this season, then the difference in expected points at that draft slot versus projected points is your cost advantage. Gurley, then, would have a cost advantage of roughly 160 points. If another potential keeper on your team doesn't exceed that advantage, then you should keep Todd Gurley.

You can feel free to use the chart above to give you a general idea of expectation, but it won't be all that precise because other players in your league are being kept, too. When that's the case, a player being selected at Pick 50 won't have the same expected point total. Instead, it'll be lower, since worse players will be available -- the good players are being kept.

You can combine this process with the one listed above, though, when trying to maximize your keeper value. Instead of thinking about expected fantasy points scored, just imagine the projected points scored among alternatives at that cost.

Let's go back to the Gurley versus Hogan example above. According to numberFire's 2018 projections, Gurley is expected to score roughly 319 PPR points this season. Hogan is listed at about 181. An easy way to see the high-level advantage both players are giving you at their keeper costs -- the late-first round for Gurley and the 15th round for Hogan -- would be to find alternatives that you would draft at those spots and compare their projections.

Todd Gurley appears to be the better choice of a keeper.

3. Is your keeper playing a replaceable position?

The exercise we just walked through is one that relates to the concept of value over replacement player, or VORP. The problem is, your boy (that's me) isn't a big fan of only making decisions based on how good or bad a player is versus his position from a season-long projections standpoint.

Why? Because fantasy football is a weekly game.

A value over replacement player formula won't necessarily adjust to the fact that you can stream quarterbacks and tight ends, for instance. The value of a signal-caller and a tight end is weakened as a result, and that's not always reflected in average draft cost.

Maybe an example would help make this point clearer. Say you're between keeping either Patrick Mahomes or Kenny Golladay for a 15th-round selection. Average draft position says that Mahomes is the guy to keep: he's being selected in the 11th round while Golladay is dropping off boards in the 13th.

Generally, though, quarterback prices (and, to an extent, tight end prices) are inflated. And Mahomes exceeding expectation at a position that's easily replaceable in fantasy football is less meaningful than Golladay far exceeding his. After all, it's not the most difficult thing in the world to stream a mid-range QB1 in most leagues.

If Mahomes finishes as the QB9 instead of the QB17 that he's being drafted as, does it really matter when you can match that production via the waiver wire?

Mahomes may be a safer player to hold on to, but the edge that you're gaining by keeping a player who plays a onesie position isn't as significant as it might appear.