Can Tyreek Hill Live Up to His Fantasy Football Draft Cost?

It's not surprising that people are so keen to draft Kansas City Chiefs playmaker Tyreek Hill. The speed and talent he showcased as a rookie did more than just turn the heads of the players he ran past. In recording the two fastest plays last year, he caught the attention of every fantasy player and NFL fan. He's the rare type of guy who can turn any play into a touchdown.

He's also being drafted too early.


Only four other rookie wide receivers have ever recorded as many touchdowns as the 12 Hill scored during his 2016 campaign. Being in the company of players such as Randy Moss, Odell Beckham, and Mike Evans is clearly nothing to scoff at, but unlike those greats who did their damage exclusively through the air, Hill attacked from everywhere on the field.

He was one of only nine players in 2016 to have two rushes of 50-plus yards. Of those, he was the only wide receiver to do so. He also led the league in return touchdowns.

This versatility, however, is also a drawback. It masks his true output as a receiver, and it hides the fact that he's playing with a quarterback that brings wide receiver fantasy doom anywhere he goes. It's also the reason he's being drafted too high in non-best ball leagues.

Anytime we're talking about a player being overvalued, it's completely relative to the player's current value. Per Fantasy Football Calculator, Hill's standard-league average draft position (ADP) has climbed into the early part of the fourth round in the past couple of weeks. 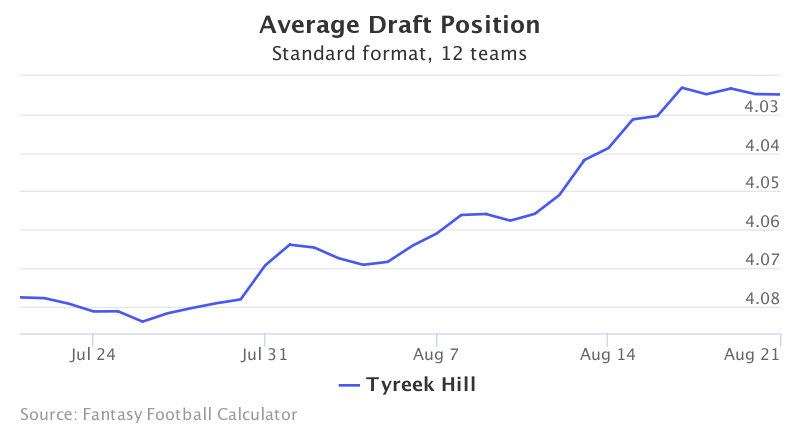 His overall ADP was at 4.09 in late July, but he's since climbed six spots and is now the 17th wide receiver taken off the board.

The Chiefs' release of Jeremy Maclin in June didn't impact Hill's value much. He's been at least a fourth-round pick since last January, and interestingly enough, the market actually cooled on him a bit after Maclin's release, only to warm up again in recent weeks.

Alex Smith is a decent real-life quarterback who has piloted several successful teams. His squads have had winning records in five out of the six seasons that he has started at least 15 games. His teams won at least 11 games in four of those seasons, three of which were with head coach Andy Reid in Kansas City.

Smith does this by not turning the ball over. He is tied for the eighth-lowest career interception percentage, according to Pro Football Reference. Of course, it's easier to throw fewer interceptions when you aren't throwing the ball deep down the field -- there is a reason he known as Captain Checkdown. This type of play provides a passing-game boon to tight ends and running backs, but it's also the reason that so few wide receivers have had stellar fantasy seasons with Smith tossing them the ball.

Maclin's 2015 season set the bar -- his 87 receptions, 1,088 yards, and 8 touchdowns were not only the most by a receiver in Smith's Kansas City tenure, but also represent highs for any wide receiver Smith has played with in his career. (In 2012, Michael Crabtree had more yards and touchdowns, but Smith only started nine games for the San Francisco 49ers). Only four wide receivers have caught at least four touchdowns in a single season from Smith in his career. On the bright side, three of those players have been on the Chiefs.

Hill's 61 receptions last season were the second-most by any Kansas City wide receiver in the Smith era, and they were the sixth-most catches overall (including tight ends and running backs). His 9.72 yards per reception bested only Dexter McCluster's 9.64 clip among the Chiefs' top-10 reception leaders over the past four years. The only other player with an average below 11.8 was Jamaal Charles, whose 9.9 mark was higher than both Hill's and McCluster's.

Looking at the numbers, Hill was treated more like a pass-catching running back than a big-time outside receiver. With Maclin gone to the Baltimore Ravens, Hill will likely take over as the top receiver in Kansas City, but he's not a proven commodity in that role. That's not a death sentence by any means, but it adds some uncertainty to the situation.

Twelve Is the Loneliest Number

Can Hill sustain the outrageous touchdown production from his rookie season? The short answer is probably not. Of the four other rookie wide receivers who had at least 12 touchdowns in their debut seasons, only Odell Beckham increased his touchdowns in Year 2. The other three regressed, and Beckham regressed when looking at touchdowns per game.

Of course, only six of Hill's touchdowns came through the air. He rushed for three and added another three on returns.

How many wide receivers in the post-merger era have run for three or more touchdowns in a season? Three. Here they are, and it's not a rosy list.

Sure, Hill could buck the trend and be the only wide receiver to do it twice. Will he? Again, probably not.

As for return touchdowns, Hill will reportedly return only punts this season, with the Chiefs taking him off kick-return duties.

Besides the likely touchdown regression, Hill has a couple of other barriers standing in the way to improved fantasy output this season. First and foremost is Kansas City's schedule. We have Kansas City's schedule ranked as the most difficult in the league, according to our nERD metric. Their wide receiver schedule has been ranked dead last as well, meaning Tyreek and the rest of the Chiefs' receiving corps will have their work cut out for them.

In addition to schedule problems is his likely regression in the run game. Hill ran for 267 yards last season, 138 of which came on two carries. He's one of only six wide receivers to have ever rushed for 200 or more yards in a single season, five if you want to classify McCluster as a running back.

While we don't know exactly how Andy Reid will be using Hill in the running game, it is not a stretch to think he may be getting fewer carries given his increased role in the passing game. If Hill loses those extra run-game touches, he'll either need to get more looks in the passing game or be efficient with the targets he does get -- and efficiency was a big problem for him in 2016, according to our numbers.

We measure offensive efficiency using our in-house Net Expected Points (NEP) metric, which you can read more about in our glossary. Using NEP, Hill was one of the least efficient receivers in the league last year. His Reception NEP per target of 0.54 was below the league average of 0.66, and his Reception NEP per target ranked 54th out of 58 receivers with 50 or more catches. Every time a receiver's catch accounts for positive NEP, we count that as a "Success." Hill's Reception Success Rate of 67.21% ranked 57th out of those same 58 receivers. Only Tavon Austin fared worse.

Efficiency wasn't Hill's thing last year. Of course, he could compensate for that with insane volume, but it remains to be seen if he can get that volume in Kansas City's low-ceiling offense, or if he can turn that volume into steady production against an assembly line of tough defenses.

Tyreek Hill is an exciting talent. His blazing speed can transform any touch into a long touchdown, instantly changing the course of the game or a fantasy matchup. With Maclin gone, Hill now takes over as the number-one receiver in Kansas City. While there is a strong chance he'll increase his reception numbers, can we expect him to replicate his 12-touchdown season, especially given the Chiefs' brutal schedule? It's highly unlikely.

He's almost certain to rush for fewer touchdowns than last year, and it would be difficult for him to match his return touchdown output given he is losing most of his kickoff return duties. Hill caught five touchdowns from Alex Smith, amazingly the second most a receiver has ever caught from Kansas City's signal caller in a single season, but our projections have Tyreek finishing with 4.29 receiving touchdowns this season.

In all, per our models, Hill is one of the more overvalued players going in the first few rounds. His current standard-league positional ADP of WR17 is 14 spots higher than we currently have him projected, and with all the red flags, it's really hard to stomach Hill at his current cost.