I'm not sure where I picked up the behavior or why I even do it. But it's a thing. And it's now to the point where I don't even question why it's a thing. It's just what I do before opening up a cold one.

Maybe you draft handcuffs for your top running backs in fantasy football.

Have you ever thought about why you're actually doing that?

Because, really, probability tells us that it's a terrible idea.

Have You Ever Asked Why?

Handcuffing as a strategy in fantasy football seems logical. You use a high-equity draft pick on an elite running back, and you want insurance. You want to make sure that if that running back goes down with an injury, you're covered by owning his backup. So you draft not just the top-notch running back in the early rounds but his backup as well towards the end of the draft.

Le'Veon Bell owners in 2015 know what I'm talking about. That year, Bell -- who was drafted, on average, ahead of every other running back in fantasy football according to MyFantasyLeague.com's average draft position data -- suffered a torn ACL against the Bengals during the Steelers' eighth game. DeAngelo Williams, a 13th-round fantasy selection that year, stepped in for Bell and ended up scoring 8 touchdowns over the final 7 fantasy-relevant games of the season.

You know who didn't that year? Knile Davis. Jonas Gray. Jerick McKinnon. And literally every other running back handcuff in fantasy football.

You know who else didn't? A lot of fantasy owners who drafted DeAngelo Williams. Because, after that Le'Veon Bell injury, Williams actually became one of the most frequently added running backs off the waiver wire.

Because teams had dropped him earlier in the season.

Because owners know, deep down, that handcuffs are a waste of a roster spot.

We Think We Know More Than We Actually Do

The first Denver back off the board that season was Montee Ball, who had an average draft cost in the fifth to sixth round. For all intents and purposes, Moreno was Ball's handcuff.

That season, Ronnie Hillman -- another Broncos running back -- was being drafted four to five rounds ahead of Knowshon Moreno. Meaning, we super-smart fantasy owners thought Hillman had a better chance to supplant Ball as the top back in Denver, not Moreno.

Hillman was technically the handcuff. Moreno was a random dart throw.

And this type of occurrence isn't that abnormal.

The toughest part in doing any sort of study on a topic like this is that there's some subjectivity involved. How exactly do you define what a handcuff is? How do you separate a handcuff from a running back who's being selected late strictly for upside purposes?

There needs to be some sort of process. We've got to define a handcuff in some way.

Intuitively, it makes sense to start with running backs who are selected as top backs for fantasy teams. In other words, in a 12-team league, we're looking at top-12 running backs according to average draft position. Those are the running backs fantasy owners want to handcuff in order to feel secure at the position.

Over the last six years, that gives us 72 running backs.

Defining where handcuff territory is within a draft is the difficult part. To keep things as open-ended as possible, let's consider a handcuff as any running back selected after the sixth round of 12-team league drafts, which is where the last hypothetical running back starters (top-24 running backs, or RB2 types) have historically been drafted.

To put all this another way, we're analyzing all top-12 running backs since 2011 who also saw a running back teammate selected between Rounds 7 and 15 (the standard end round of a draft).

Here's the distribution of those 54 running backs and the frequency in which they were able to hit a top-24, usable weekly performance in PPR formats (excludes the fantasy football irrelevant Week 17). 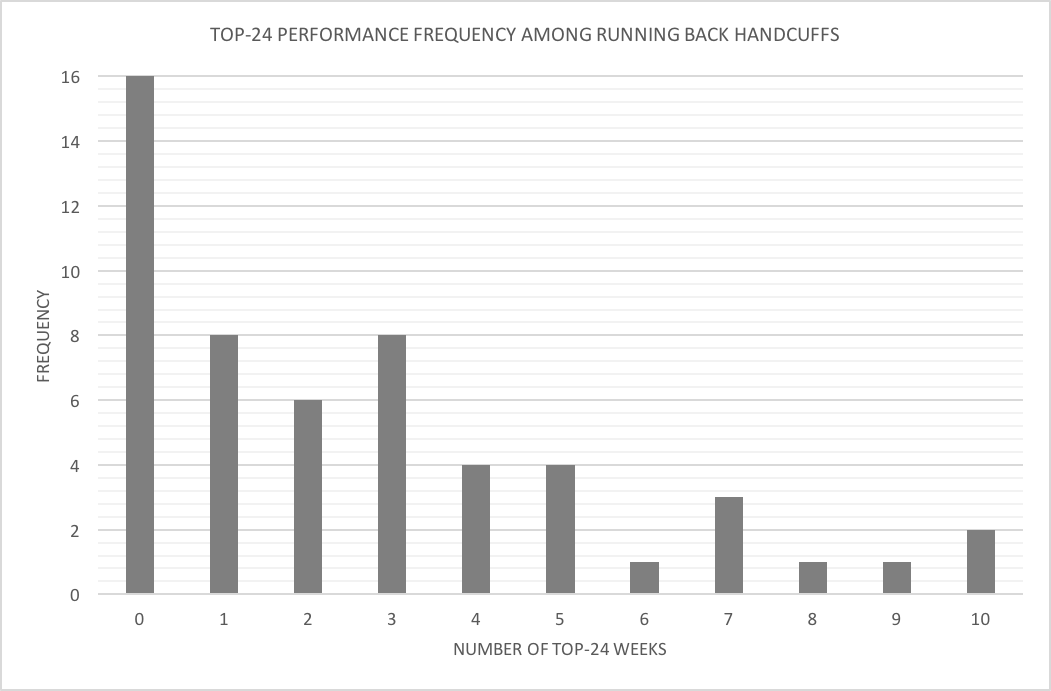 But here's the kicker: among the 12 running backs who pushed forth at least 5 top-24 performances during their handcuff year, 5 of them produced because of an injury to the top back. The other seven did work because they were, well, because they were good.

An example of this is Fred Jackson in 2013. That season, his teammate, C.J. Spiller, was a top-five running back pick in fantasy drafts. Jackson, meanwhile, was being selected in the 12th round as the 43rd running back off the board.

Spiller only missed one game that year, though. He still carried the ball 202 times, only 5 fewer carries than his breakout 2012 campaign which catapulted his cost to the top of 2013 drafts in the first place.

The same goes for players like Ryan Mathews and Giovani Bernard in 2015 and Tevin Coleman in 2016. Did they serve as handcuffs? Sure. Mathews was behind DeMarco Murray on the Eagles depth chart, Bernard was sitting behind Jeremy Hill on theirs and, last season, Coleman was technically playing behind Devonta Freeman.

But guess what? Murray, Hill, and Freeman missed a combined one game in their respective seasons. Bernard, Mathews, and Coleman were all relatively decent fantasy assets despite the fact that the running backs they were handcuffing didn't even miss time.

And then you have examples of running backs actually missing time and the handcuff doing absolutely nothing.

Among the 54 running back handcuff cohort, 17 saw their team's running back starter miss 3 or more games in their respective seasons.

That created 105 total "injury weeks," or weeks where the respective back was out, allowing the handcuff to take over. This, again, excludes Week 17.

Here's a quick comparison for you to see just how little that rate actually matters in the fantasy football world:

Remember when Jamaal Charles went down two years ago, and Charcandrick West got a lot of run? Yeah, well, Knile Davis was supposed to be Charles' handcuff.

When Marshawn Lynch had a season-ender in 2015? It wasn't the Christine Michael show, the guy everyone drafted as Lynch's handcuff. It was the Thomas Rawls show.

Say it with me: we think we know way more than we actually do.

By drafting a running back handcuff, you're not just crossing your fingers for a probable mediocre performance even if an injury happens, but you're assuming that injury will happen at an opportune time.

I just mentioned that 17 starting running backs got crushed by the injury bug among the sample analyzed, but it's not as though each of those backs started the season with the injury. In fact, the average week for a sustained injury was 7.47.

So in order to get to that more-than-likely replaceable backup running back eventually, you'd have to hold onto that handcuff for, on average, more than seven weeks of the regular season.

I don't know about you guys, but I'd much rather use that roster spot to stream a quarterback. Or to take a risk on a high-upside, unproven player.

I'd rather use it on quite literally anything else.

Fantasy owners handcuff their running backs because they're scared. They fear the day when their early-round running back stud tears an ACL or breaks an ankle.

Instead of looking at the safety of having a handcuff, analyze the actual upside. A handcuff is a handcuff for a reason: he's not the starter on his team because he's not a productive football player. That plays into the reason why, even when an injury occurs to a starting running back, these handcuffs aren't producing at a high rate.

We're also humans who get things wrong all the time. We're not always going to pinpoint the right handcuff.

A perfect handcuff storm is one where an injury actually does happen to a starting running back while the backup actually produces, and you actually select the right one during your August draft.

Is that really the type of approach you want to take in fantasy football?

There's Fantasy Football Value to Be Had in Baltimore