Can the Seahawksâ€™ Defense Survive Without Richard Sherman?

If any athlete epitomizes the â€œrags-to-richesâ€ trope of football fairy tales, it might be Seattle Seahawks cornerback Richard Sherman.

His story is well known: a Compton kid, he worked his tail off and excelled in both academics and football at Stanford and became known as a two-way threat in the Pac-12. Sherman then found his way onto a pro roster as a humble fifth-round pick before developing into a consensus elite NFL cornerback and one of the faces of Seattleâ€™s franchise.

Malcolm Gladwellâ€™s theory about â€œ10,000 hoursâ€ isnâ€™t lost on Sherman, who studies opposing offenses to the point where he could probably call their plays before they do. Heâ€™s a brilliant defensive tactician, an opinionated and active personality, and a huge nerd.

But something about his trash-talking play style and vocal criticism of the Seahawksâ€™ coaching choices in recent times has rubbed the franchise the wrong way, and Seattle is looking to trade their star defender.

Can the Seahawksâ€™ secondary do without Sherman?

Sherman is on the Mt. Rushmore of modern-day shutdown cornerbacks, and thatâ€™s not at all an exaggeration. Only a handful of NFL players on the defensive boundary can be as impactful as he can be, and his consistency makes him very deserving of a slot right next to Patrick Peterson of the Arizona Cardinals as one of the most dangerous players to throw near.

But one of the limitations of Shermanâ€™s game is that he is not a classic â€œshadowâ€ cornerback like Peterson; the Seahawks employ him in mostly a zone-based scheme, primarily as the left cornerback (from the defenseâ€™s perspective), where he can try to shut down one side of the field rather than one receiver.

His physicality and length make him a terror in stopping passes, but he simply doesnâ€™t have the natural movement skills to be as good in pure shadow coverage as some cornerbacks.

So, is Sherman actually an impactful member of the Seahawksâ€™ secondary? Does his field-halving skill make that big of an impact on their defensive production?

We can verify this through the use of numberFireâ€™s Net Expected Points (NEP) metric, a value score that describes the contribution a play (or player) makes to their teamâ€™s chances of scoring. By adding down-and-distance value to standard box score information, we can see just how much each play and each team as a whole influence the outcome of games. For more info on NEP, check out our glossary.

Now, unlike for offensive players, we donâ€™t have NEP scores for individual defensive players. There are a lot of plays where -- without the subjectivity of a human observer -- we would have to credit positive or negative contribution to a mix of defenders in the area when the play was made. In short, it would be an abject mess.

Shermanâ€™s usage actually helps us nail down his direct contribution, however. Each season, he lines up at the left cornerback spot for nearly 70 to 80 percent of his snaps, while also being on the field for 98 percent of the Seahawksâ€™ team snaps. This means for us that plays on the offensive right side of the field (remember, defensive left is offensive right) are almost solely his responsibility over the entire season.

So, how does the Seahawksâ€™ defense hold up on that side of the field? The table below depicts the distribution of value production for the â€˜Hawks defense by Adjusted Defensive Passing NEP per play in the offensive left, middle, and right zones of the field.

Since this variant of the metric refers to defenses preventing offensive success, the lower a number is, the better it is.

The passing value limited on plays going to the right side of the offense, toward Sherman, was only about 0.04 Defensive Passing NEP per play less than that toward the right. When we combine all passes to the left and middle, however, we can see that Shermanâ€™s play diminished opposing passers by nearly 33 percent of their value per play (0.21 to 0.15).

In addition, the Passing Success Rate -- the percent of plays going for positive NEP -- allowed on Shermanâ€™s side of the field was about four percentage points lower than all other passes.

Shermanâ€™s value in the passing game was very solid, though not game-changing this season. His side did devastate opposing run games, however, limiting them to -0.23 Rushing NEP per play as opposed to -0.03 elsewhere.

It seems Shermanâ€™s presence this year prevented explosive plays on his side of the field, but he wasnâ€™t much better than DeShawn Shead or Jeremy Lane at limiting positive plays this year. Thatâ€™s a big indictment for a player making $11 million a year for the next two seasons.

So, if Sherman was a slightly better version of replacement-level talents in 2016, we have to ask ourselves (and the data) is this a fluke or a trend?

For this we turn to the database at Pro Football Reference, where I searched to find the Seahawksâ€™ defensive passing prevention over the last five years, separated by play direction. For the sake of simplicity, I combined plays that went to the left and middle (not Shermanâ€™s zone) and compared them to plays heading right.

The results are stunning overall.

In nearly every statistical rate, Sherman consistently has proven to outperform the rest of the Seahawksâ€™ already excellent secondary. Whether in regards to first down rate, interception rate, or touchdown rate, Shermanâ€™s side of the field has been draped in shutdown shackles.

The only hiccup in his prevention was in 2014, when Shermanâ€™s touchdown rate allowed spiked by two percentage points to rise above the rest of the team. The rest of the last half-decade, throwing to the right has been a terrible idea for opposing offenses, and theyâ€™ve even begun to realize that.

The chart below shows the percent of passing plays against the Seahawks going either toward Sherman (red) or away (blue). 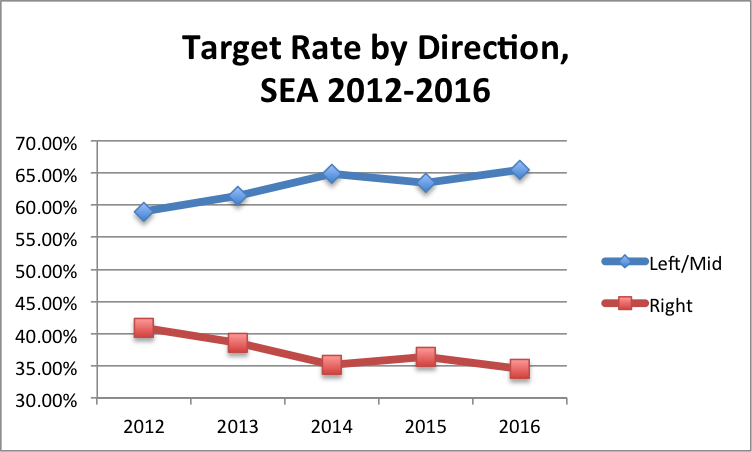 Over the past five years, the percentage of targets thrown to Shermanâ€™s zone has dropped from 40.97 percent to 34.54 percent last year. Shermanâ€™s reputation is that he can lock down half of the field, and that is totally borne out in the data. He prevents production and stalls drives, and teams are so afraid of his impact that theyâ€™ve just decided to throw elsewhere.

The Seahawks are apparently tired of Shermanâ€™s criticism and uninterested in paying him $22 million over the next two years, but any zone-based defense would be more than happy to have him slicing an entire football field in half for them.

Can the Seahawksâ€™ defense survive without Sherman? Probably. Will they be the elite unit they have been for nearly a decade? Not a chance.

The Seahawks' Defense Is Even Worse Than Expected Without Earl Thomas

The Seattle Seahawks Might Be the NFL's Most Complete Team