The Non-Backfield Rushing in Review for the 2016 NFL Season

The rushing attempt is a dying creature in todayâ€™s NFL.

All-but-gone are the days of 350-carry seasons, as weâ€™ve had just two running backs cross that threshold in the decade since Larry Johnson's 416-attempt season in 2006. Once an integral part, the running back rushing attempt is rapidly going extinct -- and the quarterback rushing attempt is still far too exotic for every team to regularly rely on.

One species whose population actually appears to be growing in use is that of non-backfield running play. With the variety of NFL formations and personnel packages these days, itâ€™s no wonder why coaches are getting creative about how to work the old-school run game into a modern model.

To define non-backfield rushing attempts, we mean any rushes that arenâ€™t credited to quarterbacks or running backs. This may include wide receiver jet sweeps, Wildcat snaps to receivers, and even fakes and trick plays to kickers, punters, offensive linemen, and defensive players. Sometimes itâ€™s simply head coaches realizing they have an advantage in personnel, using it by taking a 350-pound defensive tackle and plowing them through the line.

How effective were non-backfield runs in 2016?

Starting with the most prolific rushing position without a â€œQBâ€ or â€œRBâ€ acronym, the wide receiver has become just as versatile a position in its usage today as the running back -- and three-wide is one of the most common formations in this era.

The same way running backs split out wide to run routes, wide receivers have begun to line up in the backfield more and more. This forces defenses to show their hands on whether theyâ€™re running zone or man (if they're in zone, they wonâ€™t adjust and a linebacker will be matched up on someone too fast for them; if it's man, theyâ€™ll have to move out of position to follow the receiver and back), and leads to even more success on these plays.

We can see this success by examining the value these plays generate by numberFireâ€™s Net Expected Points (NEP). The table below depicts the average Rushing NEP per attempt of a wide receiver run over the last five years. 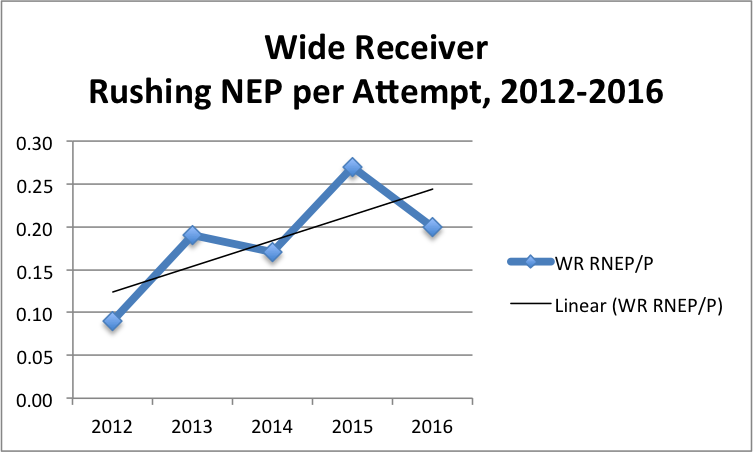 Along with a steady upward trajectory in usage, the wide receiver has also seen its effectiveness in the ground game rise. The sweeps and plays to maximize the playmaking ability and athleticism of the wide receivers in todayâ€™s NFL have offered plenty of players a chance to earn a few extra touches, but a few in particular have been successful at high volume.

The table below shows the seven receivers with at least 10 rushes last year.

The uniting factor between Tyreek Hill, Ted Ginn Jr., and Tavon Austin's above-average production on rushing attempts is that all of them have ridiculous speed at their disposal, so they can be used successfully on end-around rushes. Randall Cobb and Julian Edelman are more quick than fast, and often do not have the ability to beat slot cornerbacks in a foot race.

The single most valuable rusher on a per-play basis this year was Darrius Heyward-Bey -- a receiver definitely not lacking in speed. On his lone rushing attempt of the year, he broke off this 60-yard touchdown run.

The tight end position is an odd one for rushing value. Tight end rushing attempts have stayed static on average over the last five years, though that may be from wrongful categorization of fullbacks into this position -- or tight ends motioning into the backfield, like Charles Clay used to.

Still, there are plenty of plunges in this group from legitimate true tight ends. The table below shows the eight tight ends to rush this year.

Some had success, some saw sizable value loss, and Martellus Bennett was the only tight end with more than one attempt. The tight end rush isnâ€™t common, but it can be impactful. The chart below shows the Rushing NEP per attempt of tight ends over the last five years. How has the value of the tight end rush changed? 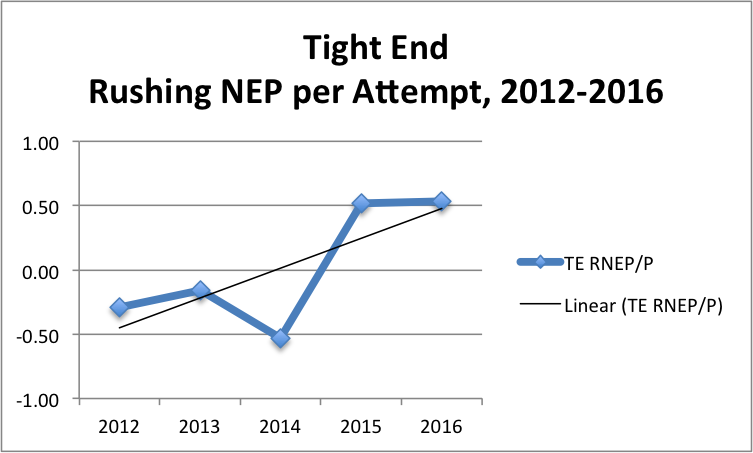 One of the more significant value swings among these players, tight ends have seen a massive value increase of an average 0.23 Rushing NEP per attempt each year over the last five years. Their Rushing Success Rate (the percent of rushes that generate positive NEP), however, hasnâ€™t seen nearly as drastic an increase, which indicates tight end rushes are tending to come in more strategic situations, such as fourth-and-short or on the goal line.

Thatâ€™s exactly what happened for Coby Fleener last year on this tight end sweep for a two-yard touchdown.

A five-year high last year in kicker and punter rushes may be due to simply more non-backfield rushes this past year than any other in the last five.

Teams have gotten more clever with their fake field goals and fake punts, and practice so that opponents have to be aware of the possibility for a punter rush or pass. The chart below shows the increase in Rushing NEP per attempt for specialists over the past five years, indicating that these fakes have gotten much more successful. 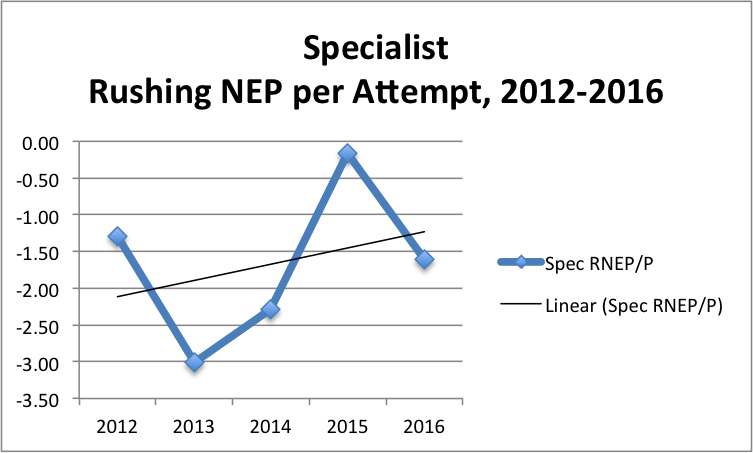 Sure enough, Jon Ryan continually threatens to take off with the snap himself, and opponents have to be aware of his potential. The table below shows the three specialists who attempted more than one rush last year.

The model of the defensive player rush was, for example, when the 1980â€™s Chicago Bears used defensive tackle William â€œThe Refrigeratorâ€ Perry as a lead blocker and occasional goal-line sledgehammer. Even trick plays featuring smaller defensive players have become less and less frequent, however, and the value of their attempts has drastically declined on average; the chart below shows this. 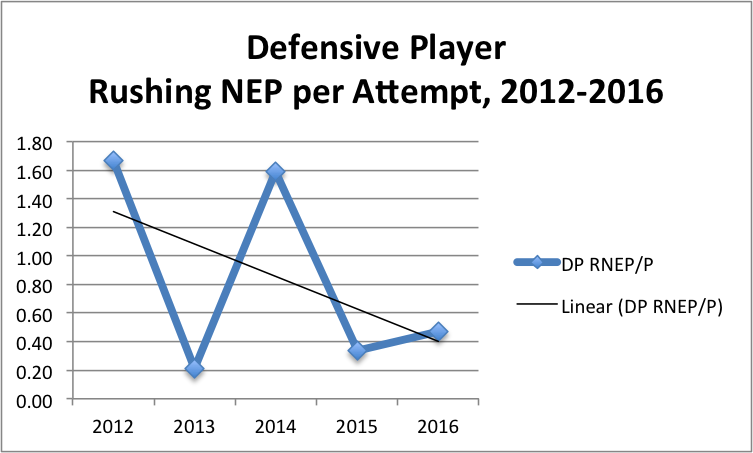 Dontari Poe did channel the spirit of The Fridge this year, though, earning himself a short yardage â€œbig guy touchdownâ€.

The non-backfield rush is uncommon these days, but itâ€™s definitely becoming far more common for wide receivers across the league. Gone is the heyday of â€œbig guy touchdownsâ€; the fast and furious jet sweep is the new rush that doesnâ€™t involve the running back or quarterback.

There will always be a place in the league for the rushing attempt, but its form and purpose will continue to adapt and transform along with the rest of the league.