One of the greatest lines in film history comes to us from the 1976 satire, Network, which skewered sensationalism in pop culture, and vapidity and superficiality in society.

In the film, 25-year veteran anchorman Howard Beale is told that heâ€™s going to be let go because his viewership is old and the network wants to draw a younger audience. Beale proceeds to suffer a very public breakdown on his program, eventually wrapping up an on-air tirade about the sorry state of the world with the phrase: â€œIâ€™m mad as hell, and Iâ€™m not going to take it any more!â€

I wonder what it will take for the Green Bay Packers to erupt about the sorry state of affairs on the defensive side of the ball for them.

Another season saw its conclusion delivered at the hands of a devastating defensive breakdown for the Packers. In the NFC Championship game, they were trotting out undrafted, practice-squad cornerbacks against the eventual league MVP and a historically potent offense.

Itâ€™s high time the Packersâ€™ front office gets up, opens its window, and shouts at defensive coordinator Dom Capers that theyâ€™re not going to take it anymore.

Discussions like this can get heated among fans of the game very quickly. In order to avoid bias and the nonsense that comes with it, we want to look at the cold, hard facts about the Packersâ€™ defense in recent years.

We can do this by using numberFireâ€™s signature metric, Net Expected Points (NEP).

NEP is a metric that describes the contribution a play (or player) makes to their teamâ€™s chances of scoring. By adding down-and-distance value to standard box score information, we can see just how much each play and each team as a whole influence the outcome of games. For more info on NEP, check out our glossary.

The table below shows the Packersâ€™ defensive rankings in each facet of opponent-adjusted Defensive NEP per play.

By adjusting for the strength of the opposing offense, we can get a truer sense of the Packersâ€™ own defensive capabilities with Dom Capers at the helm this year.

If youâ€™re asking yourself â€œWho?â€, that is the correct response.

Sure, even pass-rusher Clay Matthews missed time this year, but at a certain point a defense has to self-correct and adjust.

The Packersâ€™ lack of cornerbacks and pass-rush led to the 10th-worst pass defense in the league by opponent-adjusted Defensive Passing NEP per play. In fact, only slot corner Micah Hyde earned a Pro Football Focus rating above 60.0 (out of 100.0) for the season.

They were a strong team against the run for most of the season but slumped to about league-average in opponent-adjusted Defensive Rushing NEP per play as the lack of experience in their inside linebackers and nose tackles was exposed late in the year. Rookies Kenny Clark and Blake Martinez performed admirably, as did second-year Jake Ryan, but they need seasoning.

As evidenced by their utter collapse in the NFC Championship game, the Packers need to add something on the defensive side of the ball, whether itâ€™s discipline, talent, or game planning.

The Packers have gotten progressively worse as a defensive unit since Dom Capers arrived in 2009; thereâ€™s no arguing that. The data to back this up is outrageous, though.

The chart below shows the progression of Packersâ€™ defensive seasons by opponent-adjusted Defensive NEP per play since Capers joined the team. (Keep in mind that the y-axis is inverted because a negative score in this metric is desirable, as it shows points denied to an opposing offense.) 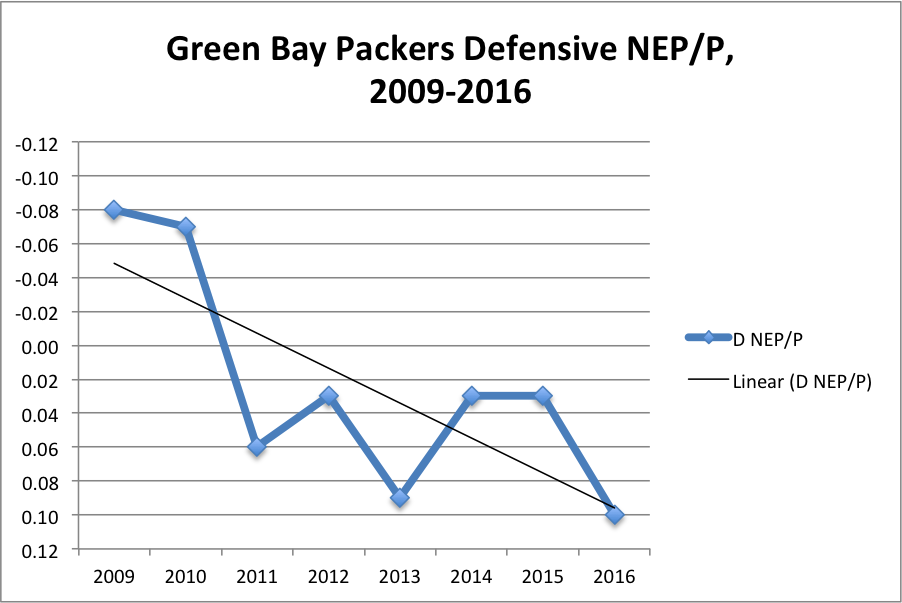 Itâ€™s hard to give him credit for an already-talented unit in those early years that won the Super Bowl in 2010.

So many players were in place before his arrival, and he merely had to let them play. The Packersâ€™ defense in that span featured Matthews at the height of his prowess, budding star safety Nick Collins, potential future Hall of Famer Charles Woodson, and nose tackle B.J. Raji in a career year.

After this, however, the Packersâ€™ defense has dropped in value annually. The trendline in the data above shows us that, on average, the Green Bay production slumps by 0.02 opponent-adjusted Defensive NEP per play each year.

When we examine the chart below, we can see exactly why theyâ€™ve gotten worse. 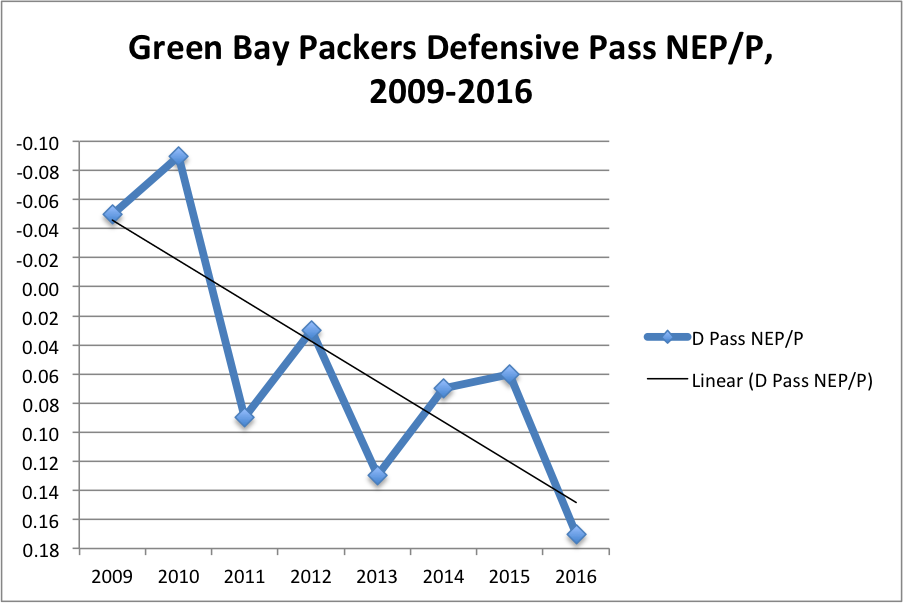 After a ridiculously good -0.09 opponent-adjusted Defensive Passing NEP per play in their Super Bowl season -- due to sacks and takeaways piling up left and right -- the Packers have slunk to the exact opposite end of the spectrum, by an average 0.03 adjusted Defensive Passing NEP per play every season. The Packers have consistently relied on flawed game plans and lackluster talent in the secondary.

Dom Capers on any other team in the league wouldnâ€™t have made it six years after a descent like this -- and probably shouldnâ€™t continue with the organization much longer.

But, despite this, pitchforks are a bit much.

Part of the calculus we look at needs to be that the NFL has exponentially become a pass-heavy league more and more over the last 10 to 15 years. Therefore, the defensive averages have also gotten worse. The table below shows this progression over the last eight seasons. 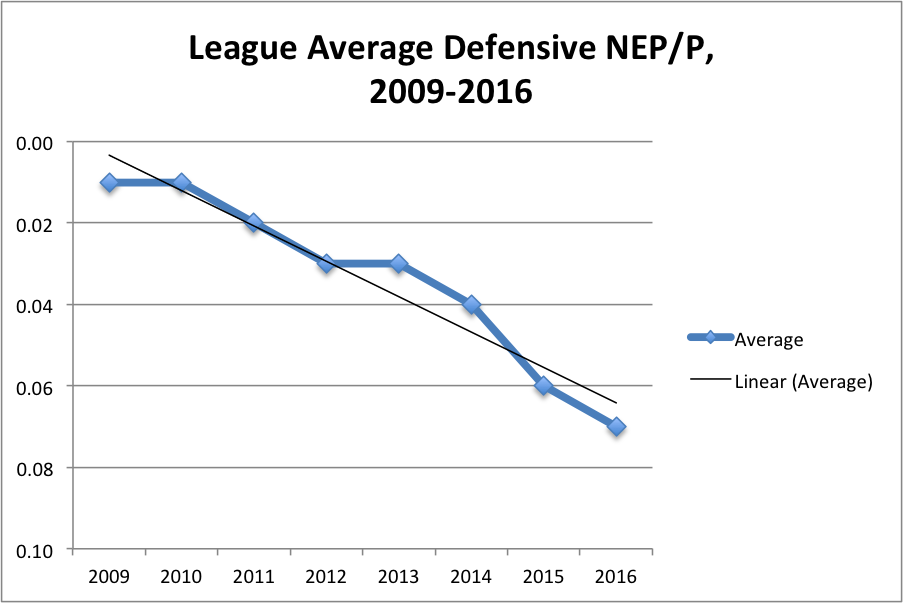 When we account for the league-average also getting lower for defensive units, this helps to salve some of our perceptions about the Packersâ€™ defensive woes -- but not enough to salvage them completely.

The charts below show the Packersâ€™ opponent-adjusted Defensive NEP per play and the Passing component, adjusted to show distance from the league-average. 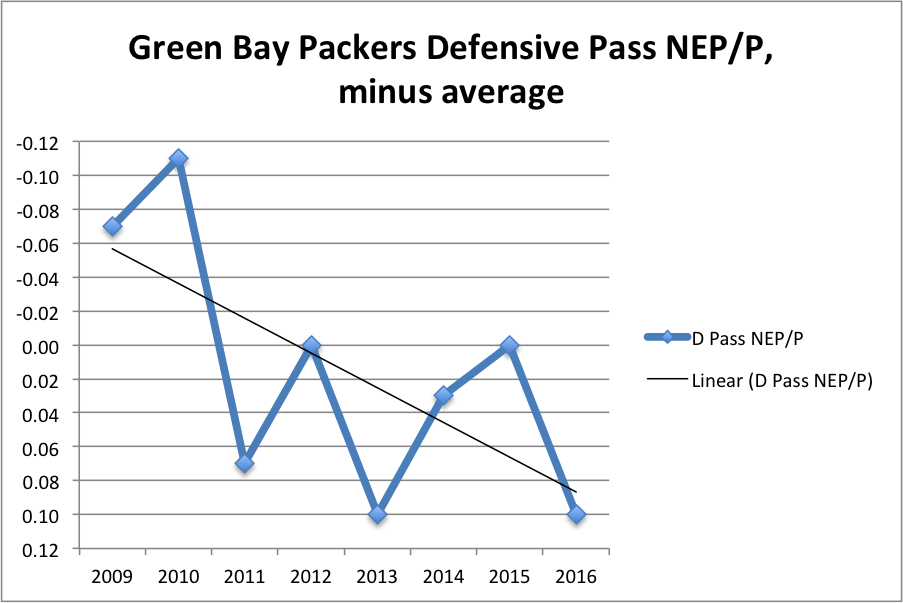 A few league-average seasons instead of constant decline is nice, but the fact of the matter is that the Packers have just gotten significantly worse since Capers got there. When league-average is your defensive ceiling, you have to pray that your offense stays potent.

Dom Capers is not long for the NFL if he canâ€™t put together game plans with what he has. No, itâ€™s not easy when your starting cornerbacks run a 4.70 40-yard dash (Gunter) and 4.60 (Rollins), but remember that the New England Patriots consistently take players off other teamsâ€™ trash heaps and turn them into quality piece.

Shea McClellin, Chris Long, Alan Branch, Rob Ninkovich, Patrick Chung, and Eric Rowe were all given up on by their former teams and are now usable players in the NFL due to the Patriotsâ€™ successful coaching and game planning. And don't forget Malcolm Butler, the cornerback who runs a 4.62-second 40-yard dash, stands 5'10", made the game-winning play in Super Bowl XLIX, and is set to become one of the higher-paid cornerbacks in the league the next few years; he went undrafted.

Dom Capers, on the other hand, has shown incapable of taking even talented players and making them usable.

That track record of dismal output for half a decade is why the Packers should finally be done with him.

The Packers' Pass Rush Will Decide the NFC Championship