What Would Philip Rivers Be Worth If the Chargers Traded Him?

Breakups are tough on everyone.

The couple involved deals with the brunt of the suffering, but friends and family members help talk them through, co-workers offer support, and even strangers may sense something is amiss from a distance. This is the feeling the football-watching world gets as we uncomfortably glance at the San Diego Chargers out of the corner of our collective eye, wishing we could say something -- anything -- to help.

Worse still: as the laid-back city of San Diego watches its beloved Super Chargers abandon it for its vegan-organic neighbor, Los Angeles, the Chargers themselves nearly ostracized their closest friend -- franchise quarterback Philip Rivers -- with the move.

Rivers has said many times that he loves having his family and home in San Diego and would not want to move or commute to Los Angeles if the Chargers moved. So when a report dropped this week that Rivers was trying to force a trade, no one was that surprised.

It turned out to be just hearsay, and Rivers will play for the Chargers through his career, but this close call just makes us realize how valuable Rivers has been for the past 13 years.

So, we here at numberFire got to wondering, what exactly would a Philip Rivers trade from the Chargers look like?

First and foremost, aside from Rivers actually being okay with the move at this point, the main reason that this scenario would never occur is that Riversâ€™ contract has a no-trade clause embedded in it. So, bear in mind as we go forward that this is all hypothetical fun-and-games prompted by an errant rumor -- not an actual prediction of where heâ€™ll be traded or what he could be worth on the market.

That said, it is fun to think about alternate reality scenarios and about trading one of the most prolific players in recent NFL history to a new setting. And thatâ€™s exactly what some team in our parallel timeline will be getting: a potential Hall of Fame talent under center. Rivers has been one of the most productive quarterbacks in NFL history, averaging 4,153 passing yards, 28 touchdowns, and 14 interceptions per season over 11 years as a starter in the league.

By Pro Football Reference's Approximate Value (AV) metric, which helps to compare the value of players across positions, Rivers already comes in as the 28th-most valuable player in NFL history with possibly another handful of years in his career to go. In fact, among quarterbacks, Rivers has generated the 12th-most AV across his career, sandwiched right between the likes of Hall of Fame talents Warren Moon and Joe Montana.

This is compelling, but itâ€™s hard to judge the context of Riversâ€™ career against players who averaged hundreds of passing yards and five touchdowns fewer per year. Still, even when we compare his career production in numberFireâ€™s own Net Expected Points (NEP) to his peers, he shows through as a true Hall of Fame candidate.

NEP is a metric that describes the contribution a play (or player) makes to their teamâ€™s chances of scoring. By adding down-and-distance value to standard box score information, we can see just how much each play and each team as a whole influence the outcome of games. For more info on NEP, check out our glossary.

The table below shows Riversâ€™s production in career NEP, average annual career NEP, and his percentage of seasons as replacement level (top-64 at quarterback in a year) and elite level (top-5).

When looking at the career production of the leagueâ€™s top quarterbacks since 2000 by Total NEP, a few players stand head and shoulders above the rest. Drew Brees and Tom Brady have been by far the most valuable passers in the new millennium, but Rivers sits in the second tier with the likes of Aaron Rodgers, Ben Roethlisberger, and Matt Ryan in terms of career value.

With his five seasons in the â€œeliteâ€ group, only four quarterbacks have as many or more peak years than Rivers: Brees, Brady, Rodgers, and Ryan. His average NEP season puts him in or just outside elite company to boot.

Rivers is the whole package as an NFL quarterback, and the only thing missing from a Hall-of-Fame rÃ©sumÃ© is a Super Bowl ring.

Going into his age 36 season, itâ€™s clear that Rivers is on the downswing of his career.

The graph below that tracks his year-to-year Total NEP helps to illustrate that. 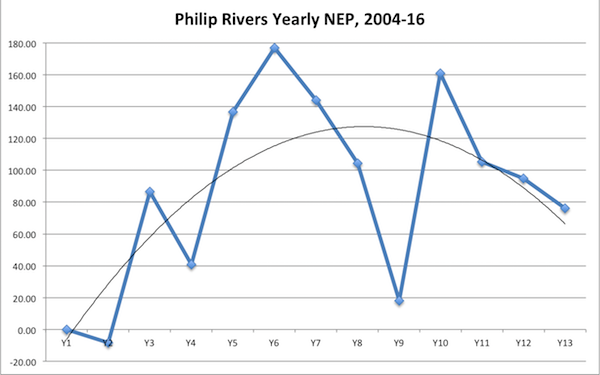 If he continues to decline at his current rate, heâ€™ll post around 38.36 NEP next year -- essentially an average Joe Flacco season. Still, given his upside and the fact that Flacco and Rivers are both signed to contracts worth over $20 million annually leads me to believe that some team would be willing to pay handsomely to acquire Rivers.

When we look back at the NFLâ€™s trades, not many quarterbacks have been swapped who were effective, talented players (obviously). When players get a decade into their careers and produce at high levels, teams try to hang onto them as long as they can. Needless to say, therefore, there are not very many precedents to compare a Rivers trade to in a one-to-one sense.

Using Pro Football Referenceâ€™s Trade Finder, though, I did track down a few swaps since 2000 of players who compare somewhat favorably to Rivers.

The table below shows the trades made where an established star quarterback in his 30s was traded. What was the return for these big-time players?

This seems surprising that some of these players, who were clearly potent players still, were swapped for so little. Itâ€™s easy to look at how the trades turned out to see whether or not they were justified, but we have to consider how the teams felt about these players when they were swapped.

Brett Favre, Donovan McNabb, and Carson Palmer (both times) were somewhat exceptional in that they were discontent with their teams, and in turn, their teams got rid of them a bit unceremoniously, just wanting to part ways and not minding giving a discount.

By using the Jimmy Johnson draft value chart, the average trade value these players brought in was 614 -- or about a late first-round pick. Even if we take out Palmerâ€™s shockingly discounted second trade, the value only rises to 734 -- around 24th Overall in any given year. It wouldnâ€™t be surprising to see Rivers fetch something between a middle first and a package of early second-round picks, similar to what the San Francisco 49ers got for Alex Smith (who was younger but had less upside and track record).

Even if the Chargers could get Rivers to waive his no-trade clause, even if Rivers wanted out, and even if they could find a buyer, it would cost something pretty precious.

As it is, the Chargers should count themselves lucky that they got to move and they kept at least one relationship intact in the process -- and that relationship is with a pretty incredible player indeed.

Let's Give Philip Rivers and the San Diego Chargers Some Love