Throughout the 2016 NFL season, there have been complaints about the level of play in the NFL.

The on-field product was lackluster, they said.

The NFL, apparently, decided to save all the fun games for Week 10.

There was a crazy ending in the Denver Broncos-New Orleans Saints game, and the Seattle Seahawks and New England Patriots helped put together the second straight entertaining Sunday Night Football game.

The peak, though, came with the thrilling end of the late afternoon meeting between the Pittsburgh Steelers and Dallas Cowboys -- an ending that probably shouldnâ€™t have happened.

Down 24-23 in the fourth quarter, the Cowboys had the ball at Pittsburghâ€™s 15-yard line at the two-minute warning. Per win probability from numberFire Live, Dallas had an 83.94 chance of winning the game.

The Steelers had two timeouts remaining but did not use any after the Cowboysâ€™ previous play when Jason Witten gained 14 yards on a pass from Dak Prescott. Instead of calling the timeouts early, the Steelers let the clock run down to the two-minute warning.

On the first play after the break, Ezekiel Elliott ran untouched for a 14-yard touchdown and a 29-24 lead. This is where everything gets a little interesting.

It was mentioned on the broadcast and by many on Twitter that itâ€™s possible Pittsburgh allowed Elliott to score to get the ball back for a chance to score a go-ahead touchdown on the next drive. The idea makes sense, and given the Steelers wanted to keep their timeouts for offense and the team had just come from the bench, itâ€™s easily something that could have been discussed on the sideline.

But the more I look at it, the less I believe that was the case.

Take a look at the play. No Steeler looks like heâ€™s taking the play off and letting Elliott go by. It looks like the Cowboys were blocking the hell out of the play and opened a huge hole for their running back, like theyâ€™ve done for much of the season. (By our Net Expected Points (NEP) metric, Dallas entered as the best running team on a per play basis, adjusted for opponent strength.)

They run the ball quite well, and this was no exception. (Video courtesy NFL Game Pass.)

Watch the play again. After Elliott gets through the hole, Cameron Heyward literally jumps over two other players trying to make the tackle. Heywardâ€™s reaction after the play also puts some doubt on the idea the Steelers were letting the Cowboys score

Maybe Heyward went rogue or missed the meeting on the sideline, but that doesnâ€™t look like the face of a player who knew a touchdown was coming. It looks like a guy whose team wasnâ€™t able to make a play late in the game.

Whatever the intentions were on the play, the Cowboys scored and had a 5-point lead and an 87.05 percent chance of coming away with the win. Sure, 87 percent is great, but it could have been closer to 97 percent had Elliott gone down at the 1 instead of scoring.

With two kneels, Pittsburgh would have needed to use both timeouts, and the Cowboys could have attempted a go-ahead field goal with less than 20 seconds remaining, and the game could have ended there.

We can assume that possibility was not discussed on the Dallas sideline during the two-minute warning because Elliott showed no hesitation of going into the end zone on the run -- it wasn't an Ahmad Bradshaw Super Bowl moment.

After a failed two-point conversion, the Cowboys still had a 5-point lead and now an 82.95 percent chance of winning with 1:55 remaining.

Pittsburgh got the ball back, and within four plays, the Steelers were in Dallas territory. The play that got them there was a 23-yard completion from Ben Roethlisberger to Le'Veon Bell.

Through Week 9, Bell had been the third-most targeted running back, and he missed the first three games of the season. Against Dallas, Bell had 9 catches on 10 targets for 77 yards and a touchdown. His 4.85 Reception NEP was just the fourth-highest on the team, but his 23-yard gain here boosted the Steelersâ€™ odds of winning by 10.69 percent.

The next play was a 24-yard pass play to tight end Jesse James that got the Steelers to the Dallas 15-yard line and bumped the win expectancy 27.85 percent to 55.42 percent. With under a minute left, Pittsburgh was now favored.

Instead of using their final timeout -- the second was used after the Bell reception -- the Steelers rushed to the line, and Roethlisberger called for a spike. Except it wasn't a spike -- it was a fake, and Antonio Brown ran to the end zone and was open for a touchdown.

The fake spike fooled 10 Cowboys defenders, all except for the corner covering Brown, Leon McFadden. Now, considering you probably had to ask yourself who Leon McFadden was -- a 2013 third-round pick by the Cleveland Browns, who is on his fourth team in four seasons and had not played a defensive snap for the Cowboys before Week 10 -- it didnâ€™t matter that he wasnâ€™t fooled. He was beat anyway.

Brown led all receivers in the game with 12.57 Reception NEP, but this was his only touchdown.

After the touchdown, the Steelers were at 86.83 percent win probability, but that dropped to 83.72 percent after Pittsburghâ€™s fourth failed two-point conversion of the game.

Prescott and the Cowboys took the field with 42 seconds and all three timeouts remaining. Dallas kept moving the ball and had a first down within two plays. With 32 seconds left and the ball at their own 35, Prescott hit Jason Witten for a 13-yard gain that decreased their chances of winning by 4.61 percent despite the ball getting moved to near midfield.

Time was running out.

The Cowboys called a timeout, and the next play would be a game-changer. Prescott hit Witten for a pass that was only a gain of five, but a face mask penalty added 15 yards to the end of the play. The penalty helped with a 39.23 percent win-probability swing, and the Cowboys were then favored at 66.59 percent.

The game was won on the next play when Elliott was given the ball and -- again untouched -- ran for a touchdown. The 32-yard touchdown run gave the Cowboys a 35-30 lead and a 96.9 percent win probability. Elliottâ€™s run added 3.57 Net Expected Points, which was 48.7 percent of his 7.38 Rushing NEP during the game.

Dallasâ€™ blocking was again incredible, and the Steelers werenâ€™t sitting back. They had eight men in the box, but the line was able to create a hole just big enough for Elliott to get through, and with so many Steelers up at the line, as soon as the hole was hit, Elliott was gone. 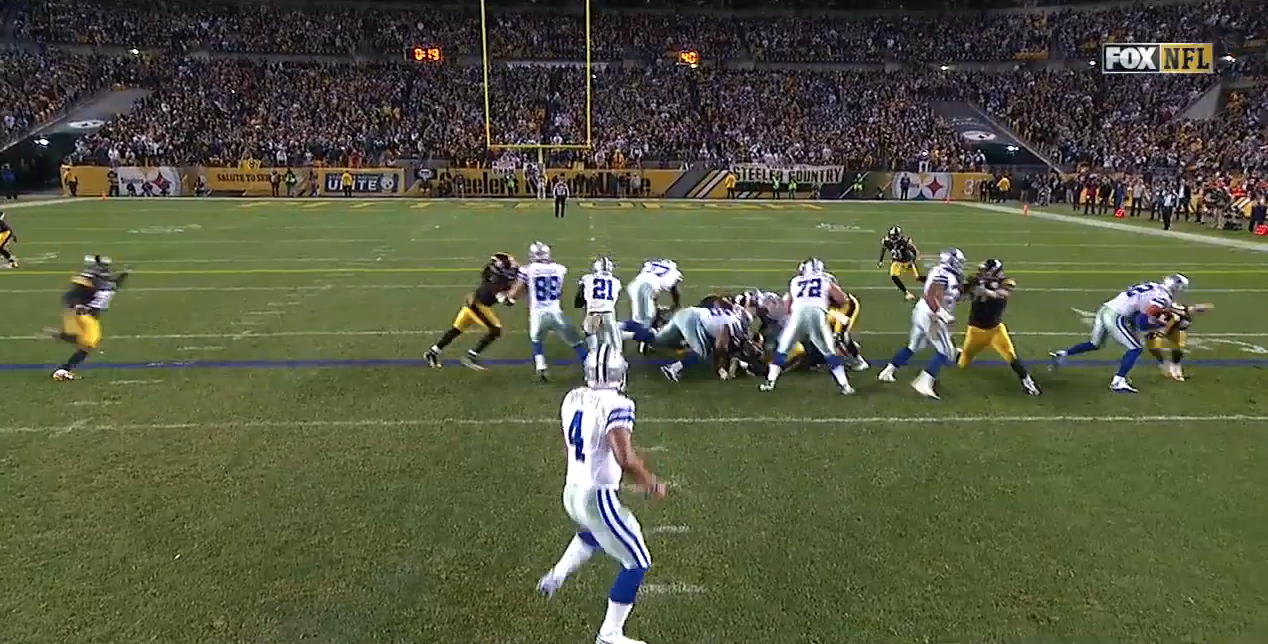 With the win, Dallas is now a game and a half in front of the Seattle Seahawks for the 1 seed in the NFC. They also now have the best point differential in the league at plus-88.

Pittsburgh now drops below .500 for the first time this season after a four-game losing streak. Theyâ€™re a game behind the division-leading Baltimore Ravens and could be a half game behind the Cincinnati Bengals should they defeat the New York Giants Monday night.

This was a game Pittsburgh needed to win more than Dallas did, and at multiple times during the contest, they were more likely to do so. The Steelers and their fans wonâ€™t be happy with the end result, but the path that got us there brought what might have been the most entertaining game of the 2016 season with one of the craziest win probability graphs we'll see all year.