5 Quarterbacks With Major Touchdown Upside for 2018

If you're going to knock Jimmy Garoppolo as a fantasy option this year, it likely has to do with his low floor and the high degree of uncertainty involved in his situation. He's unproven, with only 7 NFL starts and 272 pass attempts in his first four seasons, and he's taking over at the helm of a San Francisco 49ers offense that finished last season ranking 20th in points scored (an improvement over 2016, when they ranked 27th, but still a shaky mark).

When we're looking for pure touchdown ceiling, we're not looking for high-floor players, though. We're after someone with big upside, and that's something Garoppolo offers no shortage of.

Last year's league-average pass-to-run ratio in the red zone was 1.13-to-1, meaning that 53.1% of the snaps inside the 20 were pass plays. Kyle Shanahan's 49ers offense crushed that mark, with a 1.40-to-1 ratio, which was the eighth-most pass-happy in the NFL. A whopping 58.4% of their red-zone plays were passes, and in their five games with Garoppolo starting, that percentage jumped up to 58.9% (1.43-to-1 ratio). Their 43 red-zone pass plays in that stretch were 9 more than any other team.


But can we count on the 49ers to get down into the red zone often enough for that pass-heavy approach to manifest itself in a high volume of attempts for Jimmy G? In short, yes. 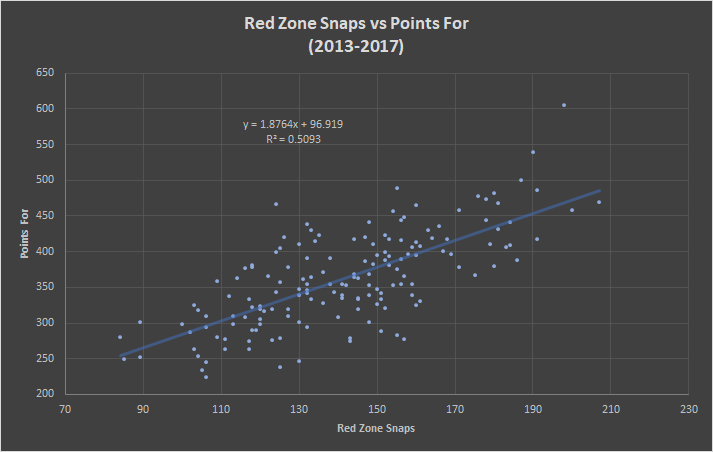 As I outlined earlier this off-season, the amount of red zone snaps a team runs are correlated pretty strongly to their points scored. This isn't any sort of a surprise -- it makes sense that a high-scoring offense will consistently get near the end zone before scoring, and conversely that a team running lots of plays from a high-scoring area of the field will be high-scoring.

5Dimes Sportsbook have given the 49ers the seventh-highest over/under (383) for points this season, and even though the under sits as a favorite at the moment, that's still a strong indicator that San Fran can be expected to do plenty of scoring.

numberFire's models are in agreement, as well, with the 49ers projected to have the ninth-best offense in 2018.

Garoppolo's seven touchdowns last season came despite some very inefficient play in the red zone (his 15.6% touchdown rate ranked 36th among the 44 passers with at least 10 such attempts). Being so far below average in a small five-start (six-game) sample in a stat that is highly prone to variance (like touchdown rate is) leaves plenty of room for variance to give him a nice boost in efficiency.

If we see that increase coincide with his volume rising up to the lofty levels that it has the potential to in 2018, his touchdown numbers will go through the roof.